We report 7 cases of melioidosis in Colombia and comparision of 4 commercial systems for identifying Burkholderia pseudomallei. Phoenix systems were not a definitive method for identifying B. pseudomallei. For accurate identification, we recommend including this bacterium in the library databases of matrix-assisted laser desorption/ionization mass spectrometry systems in Latin America.

Melioidosis is an infectious disease caused by Burkholderia pseudomallei, a saprophytic soil bacterium (1). Recently, an increase in cases outside the Asia–Pacific region, including the Americas, has been reported. It is not clear whether this increased number of cases reflects an increase in incidence of this disease or improvements in its identification by microbiological laboratories and research facilities (2). 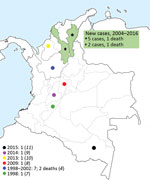 Figure. Geographic locations of 7 reported cases of melioidosis in Colombia.

We describe 7 cases of melioidosis in the Caribbean coast region of Colombia among patients who sought emergency services or were referred to 3 hospitals in the city of Valledupar (Figure). None of the patients reported travel abroad. Four patients were admitted during 2015 and 2016; we analyzed the corresponding isolates using 4 commercial methods and a molecular identification method. For the other 3 cases, which were diagnosed in 2014, we reviewed patient medical records and microbiological results. These isolates were not available. The study was approved by the ethics committees of Clinica Laura Daniela, Clínica Médicos, and Instituto Cardiovascular del Cesar.

Of the 7 patients, 6 (86%) were men; 2 patients were admitted to the intensive care unit (Table 1). The most common clinical presentation was bacteremic pneumonia (in 4 patients); 5 patients had a history of diabetes.

The 4 strains isolated in 2015 and 2016 were identified as B. pseudomallei by Vitek Compact 2 (bioMérieux, https://www.biomerieux.com) and Microscan (Walkaway Beckman Coulter, https://www.beckmancoulter.com) but as B. cepacia by Phoenix (Becton Dickinson, http://www.bd.com) and as B. thailandesis by MALDI Biotyper v3.1 matrix-assisted laser desorption/ionization time-of-flight (MALDI-TOF) mass spectrometry (Bruker Daltonics, https://www.bruker.com). Internal transcribed spacer (ITS) DNA sequencing identified all the isolates as B. pseudomallei. Sequences of these 4 isolates were submitted to GenBank (accession nos. KX898558, KY659330, KY996759, and KY659331). According to patient medical records, the 3 isolates from 2014 were identified as B. pseudomallei using the Vitek or Microscan system or both (Table 2).

MIC testing was performed using the system available in the institution where the patient was being treated: Microscan Walkaway (isolates 1, 2, 3, 5) and Phoenix systems (isolates 4, 6, 7). According to published cutoff points for B. pseudomallei (Clinical and Laboratory Standards Institute, https://clsi.org/standards/products/microbiology/documents/m45), all isolates were susceptible to trimethoprim/sulfamethoxazole and meropenem, and 2 isolates (isolates 2 and 7) were resistant to ceftazidime (MIC >16 μg/mL); however, isolate 7 was tested 2 more times using Microscan, resulting in a value of <2 μg/mL. Isolate 2 was not available for further analysis.

Within the genus Burkholderia, B. pseudomallei, B. mallei, and the B. cepacia complex are the species usually associated with human infection (3,4). Historically, melioidosis is recognized as a major cause of fatal pneumonia and sepsis in Southeast Asia, South Asia, and northern Australia. It is believed that movements of both humans and cargo have contributed to the dissemination. A phylogenetic reconstruction study determined the African origin of the American isolates and the overlapping of the introduction of B. pseudomallei into the New World with the height of the slave trade from Africa to the Americas (5).

In Colombia, melioidosis is not a disease of public health interest and thus could be underreported. However, Colombia is second to Brazil with the highest number of cases reported in South America (1). The actual number of cases is unknown, probably because of the lack of awareness and suspicion of the disease by health professionals, together with the absence of technology for proper diagnosis and the underreporting of diagnosed cases. At least 10 reported cases of melioidosis have been acquired in the Andean region of Colombia. Severiche published a report in 1998 about a patient with pneumonia (6). Montufar et al. described a series of 7 patients during 1998–2012, of whom 5 had bacteremic pneumonia (7). Since then, other cases of bacteremic pneumonia have been reported (8,9), as well as 1 case of chronic lung melioidosis in a patient on Colombia’s west Caribbean coast (10). Guzmán-Gómez et al. described a case of osteoarticular melioidosis acquired in the Colombian rainforest in 2015 (11), the only case confirmed by sequencing (ITS-16S rRNA gene). The areas in Colombia where melioidosis cases have been reported, including these new cases from the Caribbean coast, are consistent with the previously proposed model (2) (Figure).

The treatment of melioidosis is prolonged and includes 2 phases: intensive treatment with intravenous antimicrobial therapy for 10–14 days using ceftazidime, imipenem, or meropenem; and an eradication phase with oral antimicrobial therapy for 3–6 months with trimethoprim/sulfamethoxazole alone or in combination with doxycycline (15). In the cases we report, treatment with meropenem was started, because it is easier to prescribe this antimicrobial drug in Colombia, given the high rate of extended-spectrum β-lactamase–producing Enterobacteriaceae; the use of ceftazidime is restricted for the same reason. Because of the severity of illness and the high rate of death from this disease, along with the required prolonged antimicrobial drug therapy and the small number of drugs available for its treatment, it is necessary not only to strengthen the public health surveillance and clinical suspicion of melioidosis but also to acquire tools that permit an adequate diagnosis, especially in potentially endemic areas, which, in the case of Colombia, could be an extensive geographic area.

With the presence of B. pseudomallei on Colombia’s Caribbean coast confirmed, clinicians should suspect melioidosis in patients with risk factors, suggestive clinical symptoms, and microbiological isolates from clinical specimens of B. pseudomallei or other members of the Burkholderia genus. In this case, >1 microbiological identification method should be used, especially if the outdated Phoenix or MALDI-TOF mass spectrometry databases are used.

Finally, it is necessary to include melioidosis in a passive surveillance system, especially in those regions of Latin America where the environmental conditions create high probabilities for the presence of the disease. Currently, Colombia has a public health surveillance and control system under the supervision of the National Institute of Health, to which all health institutions must notify diseases of public health interest. To determine the true magnitude of melioidosis in Colombia, it must be included as a notifiable disease and measures established to enable its early diagnosis and treatment.