Bank voles in Poland are reservoirs of zoonotic viruses. To determine seroprevalence of hantavirus, arenavirus, and cowpox virus and factors affecting seroprevalence, we screened for antibodies against these viruses over 9 years. Cowpox virus was most prevalent and affected by extrinsic and intrinsic factors. Long-term and multisite surveillance is crucial.

The most prevalent rodentborne zoonotic viruses in Europe are hantaviruses, lymphocytic choriomeningitis virus (LCMV), cowpox virus (CPXV), and Puumala virus (PUUV) (1). In 2016, a total of 18 countries in Europe reported 2,190 cases of hantavirus disease, mainly caused by PUUV. The occurrence of rodentborne viruses in Poland is not well documented. The first outbreak of hantavirus infections among humans (9 cases) was reported in 2007. During 2012–2016, a total of 79 cases of hantavirus infections were reported in Poland, 55 of them in Podkarpackie Province in 2014 (2). In 2015, a case of human cowpox infection was reported in Poland (3).

Study sites were located in the Mazury Lake District region in northeastern Poland (Appendix Figure 1). The sites and methods used for trapping rodents and sampling and processing trapped animals have been described (4). We analyzed serum samples by using an immunofluorescence assay (IFA) (Appendix Figure 2). We diluted serum samples 1:10 in phosphate-buffered saline and tested their reactivity to hantaviruses by using a PUUV IFA, to cowpox viruses by using a CPXV IFA, and to arenaviruses by using an LCMV IFA (5). IFAs were conducted as previously described (6,7). The statistical approach has been comprehensively documented (4). 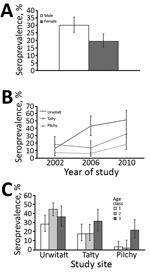 Our data show that CPXV was the dominant viral pathogen among bank voles in Poland during the study period, although PUUV and LCMV were also found. Our finding that the highest seroprevalence was among bank voles from Urwitałt complements our previous reports on other pathogens, reflects the importance of extrinsic effects on prevalence, and establishes that the sites from which host populations are sampled is the most influential factor affecting prevalence (4).

Our results provide additional information about the role of bank voles in Poland as infectious virus reservoirs. Although short-term cross-sectional studies are useful as a starting point (8), to obtain a comprehensive ecologic picture, long-term monitoring (several years and preferably a decade or longer) and a multisite approach are crucial. Identifying rodent species that can serve as reservoirs for zoonotic disease viruses and predicting regions where new outbreaks are most likely to happen are crucial steps for preventing and minimizing the extent of zoonotic disease among humans (9).

Dr. Grzybek is a parasitologist holding the position of assistant professor in the Department of Tropical Parasitology, Medical University of Gdansk, Poland. His research interests include epidemiology and ecology of macroparasites and microparasites in rodents, especially bank voles. He is also interested in host–parasite interactions and intrinsic and extrinsic factors that influence these relationships.

We thank the University of Nottingham, Warsaw University, and the Medical University of Gdansk for financial support. M.G. thanks Alicja Rost and Ewa Zieliniewicz for their assistance in the laboratory.