Ticks are responsible for mechanical damage to animal blood vessels and skin and are known to transmit a wide range of bacteria, viruses, and protozoa, causing severe infections in animals and humans (1). Most defined Rickettsiales are considered zoonotic emerging or reemerging pathogens; some can cause severe human illnesses, including anaplasmosis, rickettsioses, scrub typhus, and ehrlichiosis (2). Determining the ecology of local tick species and recognizing the tickborne pathogens they carry are of paramount public health importance. Our study assessed risk factors for and the prevalence and co-infectivity of several tickborne pathogens in ticks collected from dogs in South Korea.

Rickettsia spp. are emerging or reemerging pathogens with public health relevance; 1 species, R. raoultii, causes human tickborne lymphadenitis in many countries in Europe (3). Of note, R. raoultii had not been detected in humans, animals, or vectors in South Korea until recently, but it now appears to be endemic in ticks infesting dogs. We collected a total of 980 ticks in central (n = 442) and southern (n = 538) South Korea from 102 dogs during 2010–2015. We used both morphological and molecular methods (Appendix) to identify the tick species, which included Haemaphysalis longicornis, H. flava, and Ixodes nipponensis, then sorted them into 364 pools (1–7 ticks per pool) by dog, identified tick species, and developmental stage (larva, nymph, and adult). 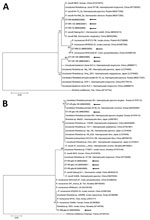 Several tickborne pathogens were then screened by using primer sets specific to each pathogen (Appendix). The 16S rRNA genes of R. raoultii were found in 149 (40.9%), R. monacensis in 1 (0.3%), and Candidatus Rickettsia principis in 2 (0.6%) of 364 tick pools (Figure; Appendix Table 1). R. raoultii was detected in 100 nymph and 49 adult H. longicornis ticks in South Korea. R. raoultii–positive ticks were collected from 25 (24.5%) of 102 dogs, a relatively high proportion of those observed in this study.

Increased seasonal tick populations and activity in the summer and autumn impact the transmission of tickborne pathogens (8). In this study, we collected ticks from May to September, and found that tick abundance and distribution patterns were similar to those in a previous study in South Korea (8), which showed that both ticks and tickborne pathogens were more prevalent in southern regions and during the summer. South Korea is also steadily shifting to a subtropical climate due to global warming (9), which may influence this seasonal effect, as well. In another previous study in South Korea (4), ticks were collected from stray or pet dogs, but no ticks were found on military working dogs. These military dogs received routine veterinary care for preventive ectoparasite treatments. Therefore, tick prevention measures should be effective in endemic areas with known tick seasons, when infestations are higher.

Our findings indicate the zoonotic potential of dog ticks in South Korea. Physicians and public health officers therefore need to be aware of the high potential and clinical complexity of infection with R. raoultii and other tickborne pathogens in order to confirm suitable testing and treatment needs in endemic areas (10). Therefore, we strongly recommend continuous evaluation of the potential public health threat posed by infected ticks to humans in South Korea. A better understanding of local tick species, including H. longicornis, and a more thorough characterization of TBP agents, such as R. raoultii, are critical.

Dr. Seo received a PhD degree at Kyungpook National University, South Korea, and is currently working as a research scientist at the Animal and Plant Quarantine Agency, Gimcheon, South Korea. His primary research interests are vectors and vectorborne diseases.

This work was supported by a grant from the Basic Science Research Program through the National Research Foundation (NRF) of Korea funded by the Ministry of Education (grant number: NRF-2016R1D1A1B02015366).

The authors declare no conflict of interest.

Page created: September 07, 2020
Page updated: September 17, 2020
Page reviewed: September 17, 2020
The conclusions, findings, and opinions expressed by authors contributing to this journal do not necessarily reflect the official position of the U.S. Department of Health and Human Services, the Public Health Service, the Centers for Disease Control and Prevention, or the authors' affiliated institutions. Use of trade names is for identification only and does not imply endorsement by any of the groups named above.