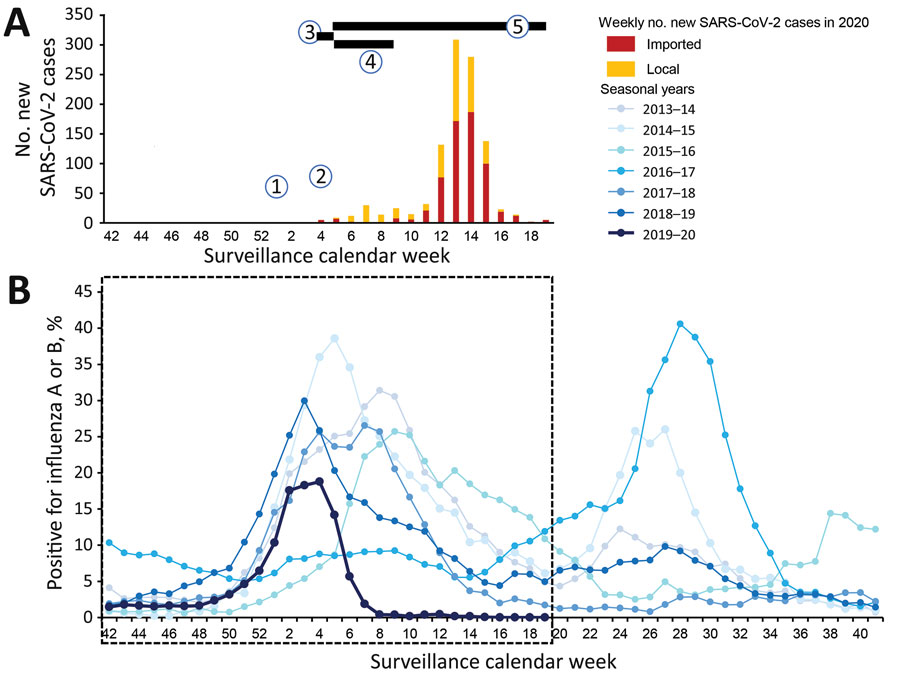 Figure. Epidemic curve showing number of reported SARS-CoV-2 cases (A) in Hong Kong, China, and abrupt subsidence during the corresponding 2019–20 winter influenza season (B) compared with 6 preceding years between 2013 and 2019, as derived from the percentage of respiratory specimens tested that were positive for influenza A or B viruses. Onset of winter influenza season is defined as the first week that had an increase in percentage of respiratory samples tested that were positive for influenza A or B viruses, followed by a consecutive increase for >4 weeks. End of the season is defined as the last week that had a decrease of the same percentage, followed by a consecutive decrease for >2 weeks, compared with the previous week. SARS-CoV-2 timelines: 1, on December 30, 2019, the Wuhan Municipal Health Committee issued an urgent notice on treatment for pneumonia of unknown cause; 2, on January 25, 2020, the World Health Organization declared a Public Health Emergency of International Concern; 3, during January 25–28, 2020, the Lunar New Year public holiday occurred; 4, during January 29–March 1, 2020, civil servants made special work arrangements; 5, during January 29–May 26, 2020, schools were closed. SARS-CoV-2, severe acute respiratory syndrome coronavirus 2.

Page created: August 11, 2020
Page updated: October 19, 2020
Page reviewed: October 19, 2020
The conclusions, findings, and opinions expressed by authors contributing to this journal do not necessarily reflect the official position of the U.S. Department of Health and Human Services, the Public Health Service, the Centers for Disease Control and Prevention, or the authors' affiliated institutions. Use of trade names is for identification only and does not imply endorsement by any of the groups named above.