In 2019, an outbreak of chikungunya virus infection occurred in Mandalay, Myanmar, and 3.2% of blood donors and 20.5% of patients who were children were confirmed as being infected. The prevalence rate was up to 6.3% among blood donors. The East Central/South African genotype was predominantly circulating during this outbreak.

Chikungunya (CHIK) is an emerging tropical disease caused by CHIK virus (CHIKV; family Togaviridae, genus Alphavirus), of which there are 3 genotypes: Asian, East/Central/South African (ECSA), and West African (1). This virus was detected in Asia during 1954 and has been observed to continuously circulate in countries in southern and Southeast Asia (2–5). In Myanmar, the first case of CHIKV infection was confirmed serologically in 1973 (6), and the CHIKV ECSA genotype was observed in patients during 2010 (7).

The signs and symptoms (e.g., fever, rash, and severe joint pain) caused by CHIKV are similar to those caused by dengue virus. Although deaths from CHIK are rare, this disease can cause neurologic manifestations (8). The asymptomatic infection rate for CHIKV is 10%–25%. There is a risk for CHIKV transmission by blood transfusion (9), but no transfusion-transmitted infections have been documented. In many countries, including Myanmar, CHIKV screening is not routinely performed for blood donors.

We aimed to determine the proportion of blood donors who had CHIKV IgM and CHIKV RNA. Because our study was conducted during the outbreak of CHIKV infection in Myanmar in 2019, proportions of virus-positive children with acute febrile illness during routine dengue surveillance were also determined. We also sought to identify the CHIKV genotype for CHIKV RNA-positive samples.

An outbreak of CHIKV infection occurred in Mandalay, Myanmar, during 2019. A cross-sectional descriptive study was conducted among blood donors at the Blood Bank of Mandalay General Hospital and patients at the Mandalay Children Hospital. A total of 500 blood donors and 151 patients who had acute febrile illness but were negative for dengue virus nonstructural protein 1 (NS1) were enrolled. Approximately 20–25 blood donors/week were enrolled, and their blood samples were collected once per week by using saturation method during the peak season of arboviral infection (June–September). Children (<13 years of age) with acute febrile illness were also enrolled.

Sequencing of envelope protein 1 (E1) (402 bp) and NS1 1 (262 bp) gene regions of CHIKV was performed by using Sanger method with a 3500 Genetic Analyzer (Thermofisher Scientific). We used the maximum-likelihood method by using PHYML version 3.0.1 (http://www.atgc-montpellier.fr). Phylogenetic trees were constructed on the basis of partial nucleotides sequences of 2 gene regions for CHIKV strains. The substitution model was selected by using jmodeltest-2.1.7 (https://github.com), and generalized time reversible plus l was chosen as the model with bootstrap values after 1,000 replications. Trees were drawn by using Fig tree software version 1.4.2 (10). Sequences of the strains in this study were submitted to GenBank (accessions nos. MN552427–41).

The proportion of confirmed CHIKV cases among blood donors had an increasing trend from June through September: prevalence rates were 1.1% in June, 0.9% in July, 2.5% in August, and 6.3% in September (p = 0.02) (Figure 1). Among infected patients, 19 had an acute viral infection and 4 had neurologic manifestations, and all blood donors were asymptomatic (Table 1). 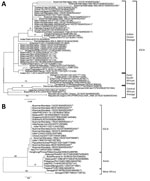 Figure 2. Phylogenetic trees constructed on the basis of partial nucleotide sequences of CHIKV to show the relationships of CHIKV strains from different sources, including strains detected in Myanmar during 2019 (asterisks)....

Amino acid sequences of the partial E 1 protein of the infecting 2019 CHIKV strains in this study showed no E1:A226V mutation (Table 2). However, the E1:K211E mutation, which was not observed in strains isolated in Myanmar during 2010 having the E1:A226V mutation, was present. Phylogenetic trees for partial E1 and NS1 genes (11) showed that our virus strains belonged to the Indian Ocean clade of the ECSA genotype and were similar to those circulating in India and Thailand and previously circulating in Myanmar (Figure 2).

Previous studies showed that genotypes from Asia and the ECSA genotype were circulating in Southeast Asia (11). In Thailand, Indian Ocean and South African clades of the ECSA genotype were detected during the outbreak in 2019 (2). The Indian Ocean lineage of ECSA genotype has been introduced in SEA countries since 2007 (11). In our study, the virus strains detected in the 2019 outbreak in Myanmar belonged to Indian Ocean lineage of ECSA genotype and had close similarity to the strains circulating in 2019 in Thailand, which could be the source of CHIKV in Myanmar. The CHIKV strains seen in 2010 in Myanmar also belonged to the same clade of ECSA genotype. However, the E1:A226V mutation in these strains (7) was not present in the 2019 CHIKV strains. Both E1:A226V mutant and nonmutant strains were isolated in Thailand during 2019 (2). Furthermore, the CHIKV strains in this study had the E1: K211E mutation with an E1:226A background. A previous study reported that CHIKV strains with the E1:K211E mutation with an E1:226A background increased virus infectivity and transmission compared with nonmutant parenteral E1:226A CHIKV virus (15). Our study highlights the need to strengthen infection prevention control measure activities and blood donor screening during CHIK outbreaks.

We thank all staff of Virology Research Division, Department of Medical Research Pyin Oo Lwin, Myanmar, and the Department of Virology, Institute of Tropical Medicine, Nagasaki University, Nagasaki, Japan, for providing support during the study.

This study was supported by Ministry of Health and Sports, Republic of the Union of Myanmar (Ministry of Health Research grant 048), grants from the Japan Initiative for Global Research Network on Infectious Diseases of the Japan Science and Technology Agency (grant no. JP19fm0108001), and the Research Program on Emerging and Re-emerging Infectious Diseases of the Agency for Research and Development (19fk0108035h1203).

Page created: July 31, 2020
Page updated: October 19, 2020
Page reviewed: October 19, 2020
The conclusions, findings, and opinions expressed by authors contributing to this journal do not necessarily reflect the official position of the U.S. Department of Health and Human Services, the Public Health Service, the Centers for Disease Control and Prevention, or the authors' affiliated institutions. Use of trade names is for identification only and does not imply endorsement by any of the groups named above.