Little information is available about human infections by the members of the genus Ehrlichia in Mexico. Only 2 species, Ehrlichia canis and E. chaffensis, are known to cause disease in this country. We report a fatal case of human monocytic ehrlichiosis in Mexico City in a man who was homeless.

The genus Ehrlichia contains 6 species of obligately intracytoplasmic bacteria that have major roles in human and veterinary medicine. These bacteria can cause ehrlichiosis, an emerging zoonoses transmitted mainly by bites of several hard tick species of the genera Amblyomma, Ixodes, and Rhipicephalus (1). In the Americas, the most relevant species that involves public health is Ehrlichia chaffeensis, the etiologic agent of human monocytic ehrlichiosis, an acute disease characterized by fever, thrombocytopenia, leukopenia, alterations of coagulation, and hepatic and neurologic involvement; systemic complications can lead to death in 3% of case-patients (1,2).

Little is known about Ehrlichia infections in Mexico. A human case was reported in the Yucatan Peninsula during 1999 in a male patient who had fever, anorexia, lymphadenopathy, cutaneous bleeding, and sore throat. Peripheral blood morulae, PCR detection of E. chaffeensis, and anemia were also reported (3). Subsequently, a case of E. canis infection was detected in the coastal state of Oaxaca in a veterinary stylist who had close contact with dogs (4). A study published in 2016 reported a female resident of the state of Mexico who had fever, thrombocytopenia, and alteration of liver enzyme levels and died after a long hospitalization (5). We report a fatal case of human monocytic ehrlichiosis in Mexico City, Mexico.

On March 3, 2017, a 35-year-old man who was homeless (resident in Mexico City for 4 years) was admitted to the Emergency Department in the General Hospital of Xoco of the Ministry of Health of Mexico City because of trauma after a fall of 6 m from a bridge as a result of a suicide attempt. At admission, no lesions were detected in internal organs; a transtrochanteric fracture of the left femoral head was surgically repaired without complications. However, the patient had profuse bleeding during the surgical procedure, for which it was necessary to provide multiple blood transfusions. The blood units came from resident donors of Mexico City and the neighboring state of Mexico. In the postoperative period, the patient remained hospitalized for 65 days, during which behavioral alterations with several psychotic periods developed. He also had febrile episodes that evolved to a torpid state.

Routine laboratory analyses (blood count, blood chemistry, and serologic studies for infectious diseases) were performed. Because the patient was homeless and had persistent febrile episodes and dysfunction of the coagulation system, a possible infection by a rickettsial agent or Bartonella spp. was suspected because Bartonella quintana has been detected previously in human lice from persons who were homeless in Mexico City (6). For this reason 5 mL of whole blood was obtained, stored in EDTA, and processed for DNA extraction by using the QIAamp DNA Mini Kit (QIAGEN, https://www.qiagen.com) according to the manufacturer’s instructions. Blood was then examined for Bartonella, Ehrlichia/Anaplasma, and Rickettsia spp. by amplifying fragments of the gltA, rrs, and sca5, genes and using primers and PCR conditions specified (7–9). Positive controls (E. canis [GenBank accession no. MG917715], B. vinsonii [KT326174], and Rickettsia amblyommatis [KX363842) DNA]) were also included.

On April 27, 2017, antibodies against Proteus OX-19 at a titer of 1:320, leukocytosis, thrombocytosis, lymphopenia, anemia, hypoalbuminemia, and coagulation and liver enzyme alterations were reported (Table). The patient was given a diagnosis of septic shock and urosepsis and died on day 63 of hospitalization.

Total serum protein and albumin concentrations at admission were within reference ranges, but during hospitalization they decreased, as would be expected for a diagnosis of ehrlichiosis. Alterations in liver enzyme levels and coagulation times also developed. Levels of alanine aminotransferase (ALT) and aspartate aminotransferase also increased after admission; ALT showed the largest increase. The level of γ-glutamyl transpeptidase increased by >10 times over its reference value (Table). The increase in the level of ALT could be related to hepatic alterations linked to ehrlichiosis.

Necropsy showed hepatosplenomegaly and pleural effusions. Molecular assays did not detect Bartonella or Rickettsia spp., but they did detect Ehrlichia/Anaplasma spp. when primers Ehr1/Ehr2 were used. We isolated a 400-bp fragment of the 16S rRNA gene, which showed 99% identity with that of the E. chaffensis strain Arkansas. In addition, a 500-bp fragment of the dsb gene (present only in the members of the genus Ehrlichia) was amplified (10) and showed 100% identity with the sequence of E. chaffensis strain Arkansas. 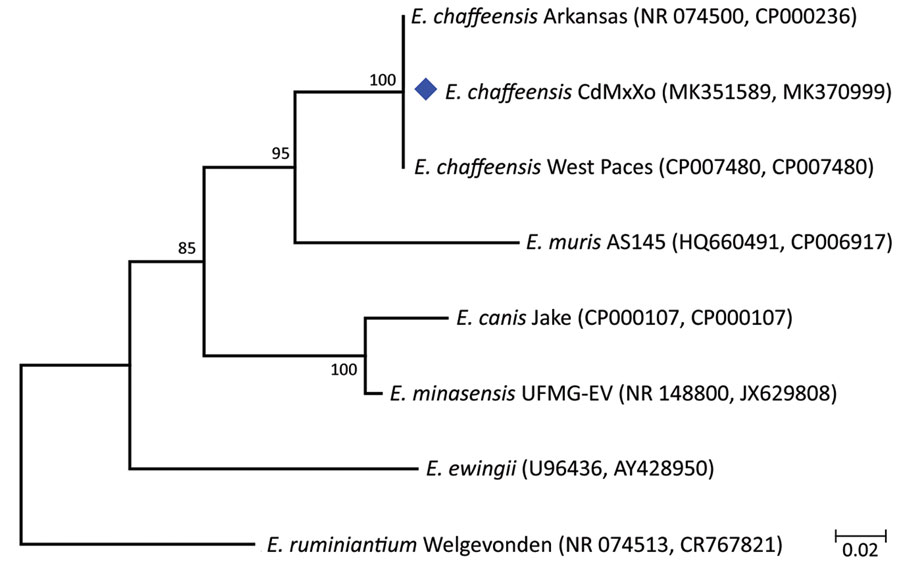 Phylogenetic analysis of the isolated sequences grouped them with sequences of 2 strains of E. chaffensis (strain Arkansas and West Paces) detected in the United States; these sequences had a bootstrap value of 99. The sequences we obtained were deposited in GenBank under accession numbers MK351589 and MK370999 (Figure).

Ehrlichioses represent systemic infections that can cause damage to different organs and systems, affecting the liver, meninges, brain, heart, and lungs. Because the pathophysiology of this disease is not well established, the findings obtained by necropsy are useful. During his hospitalization, the patient acquired some bacterial infections, which could explain the paradox that he initially had thrombocytosis and leukocytosis instead of thrombocytopenia and leukopenia, as would be expected for ehrlichiosis. Leukopenia and thrombocytopenia are present in >50% of patients given a diagnosis of E. chaffeensis infection (5).

Although this possibility is less likely, it cannot be ruled out that ehrlichiosis could be acquired by tick bite. E. chaffeensis was previously detected in 3 hard tick species (Amblyomma americanum, A. mixtum, and Rhipicephalus sanguineus sensu 1ato) (14) in Mexico. Only the lone star tick (A. americanum) has been implicated as a primary vector of this pathogen in the United States; however, its presence in Mexico has only been recorded restricted to the Nearctic region (15). Conversely, no studies demonstrate the role of the other 2 tick species as potential vectors of this pathogen or whether DNA of this pathogen came from an infected host from which these ticks fed.

For this reason, it is essential to perform systematic surveillance of this and other tick-borne pathogens in blood donors in Mexico. Studies should also be conducted with questing ticks to identify the risk to which the population is exposed and establish the actual distribution of the pathogen.

Dr. Alcántara-Rodríguez is chief of the Unit of Epidemiologic Surveillance for hospitals of the Health Ministry, Mexico City, Mexico. Her primary research interest is rickettsioses.

Page created: September 08, 2020
Page updated: November 19, 2020
Page reviewed: November 19, 2020
The conclusions, findings, and opinions expressed by authors contributing to this journal do not necessarily reflect the official position of the U.S. Department of Health and Human Services, the Public Health Service, the Centers for Disease Control and Prevention, or the authors' affiliated institutions. Use of trade names is for identification only and does not imply endorsement by any of the groups named above.