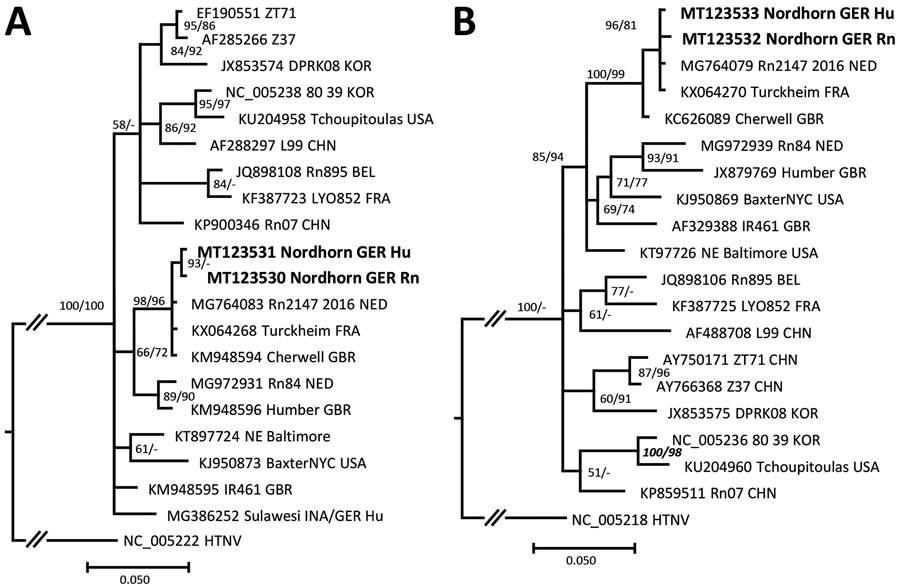 Figure. Molecular phylogenetic analysis of the amplified large (L) and small (S) segment regions of human and rat origin from Nordhorn/Germany (strains Nordhorn GER Hu and Nordhorn GER Rn, designated in bold). The consensus tree is based on a 412-nt region of the L segment (A) and a 673-nt region of the S segment (B). Alignments were constructed with Bioedit software package version7.2.5) (https://bioedit.software.informer.com) using the Clustal W Multiple Alignment algorithm. The best fitting substitution model was determined with jModeltest version 2.1.10 (https://github.com/ddarriba/jmodeltest2). Trees were reconstructed with MrBayes version 3.2.6 (http://www.mrbayes.net) and FasttreeMP version 2.1.10 (http://microbesonline.org/fasttree) executed on the CIPRES portal (https://www.phylo.org) according to maximum-likelihood and Markov chain Monte Carlo algorithms. The consensus tree is based on Bayesian analyses with 2 × 106 generations, a burn-in phase of 25%, and the Hasegawa-Kishono-Yano substitution model with gamma distribution. Bootstrap values were transferred to the Bayesian tree behind posterior probabilities only if they were >50% and if branches of both trees were consistent. Hantaan virus was used as outgroup. The L and S segment sequences were deposited in GenBank under accession nos. MT123530–33. At the end of the strain names the country of origin is given: BEL, Belgium; CHN, China; FRA, France; GBR, Great Britain; GER, Germany; INA, Indonesia; KOR, South Korea; NED, the Netherlands; USA, United States. Scale bars indicate nucleotide substitutions per site.

Page created: August 18, 2020
Page updated: November 19, 2020
Page reviewed: November 19, 2020
The conclusions, findings, and opinions expressed by authors contributing to this journal do not necessarily reflect the official position of the U.S. Department of Health and Human Services, the Public Health Service, the Centers for Disease Control and Prevention, or the authors' affiliated institutions. Use of trade names is for identification only and does not imply endorsement by any of the groups named above.