In March 2020, a severe respiratory syndrome developed in a cat, 1 week after its owner received positive test results for severe acute respiratory syndrome coronavirus 2. Viral RNA was detected in the cat’s nasopharyngeal swab samples and vomitus or feces; immunoglobulin against the virus was found in convalescent-phase serum. Human-to-cat transmission is suspected.

Figure. Timeline of disease course for human and cat with SARS-CoV-2 infection, by days from illness onset according to the cat owner, Belgium, February 22–March 25, 2020. NA, not available; ND, not...

We report the investigation of illness and infection with severe acute respiratory syndrome coronavirus 2 (SARS-CoV-2) in a household cat in Belgium (1). The cat was a female domestic shorthair, »15 years of age, that had been adopted 2 years earlier. The owner considered the cat to have been healthy since adoption, although it had never been assessed by a veterinarian. In February 2020, the owner took part in a 7-day tour to a mountain resort in Lombardy, Italy. The day after returning home, March 2, the owner felt suddenly too short of breath to conduct normal activities. As a precautionary measure, the family doctor decided to take a deep oropharyngeal swab sample and asked the patient to remain at home until the test result was reported. Over the next 10 days, the patient experienced a series of general, respiratory, and then digestive symptoms consistent with the clinical signs associated with coronavirus disease (COVID-19) (Figure). On March 6, the swab sample was declared positive for the SARS-CoV-2 genome, and home quarantine was extended until the end of March. 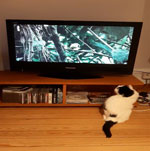 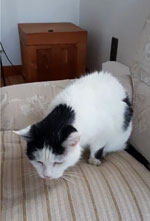 Video 2. Cat showing reverse sneezing, suggestive of the presence of mucous or mucopurulent material in the throat/nasopharyngeal area (March 16, 2020).(https://www.youtube.com/watch?v=WUdA8lnbY28) 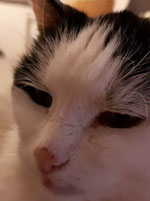 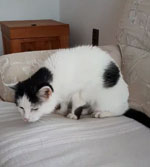 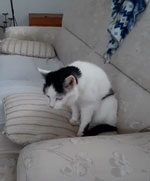 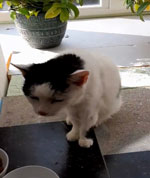 A series of laboratory analyses were then conducted (Appendix). The cat’s owner collected 26 swab samples according to instructions received by telephone; 16 samples contained varying amounts of the SARS-CoV-2 genome (Table). Overall, positive samples were detected March 11–24. The cat was examined by veterinarians at the time of blood sampling on day 22 after onset of first symptoms. Clinical examination of the cat was unremarkable at that time, and auscultation of the thorax revealed no abnormalities. Results of a complete blood count and a serum biochemistry panel were within reference ranges. Presence of serum IgG was first sought by Western blotting of mock-exposed and SARS-CoV-2–exposed Vero E6 cells lysates. In convalescent-phase serum, 5 protein bands that were simultaneously absent from mock-exposed Vero E6 cell lysates were identified (Appendix Figure). Furthermore, the convalescent-phase serum was positive by double-epitope sandwich ELISA and for 2 of the 3 antigens tested by double-epitope luciferase assay (Table; Appendix Table). Whereas serum samples from 30 control cats and 10 control humans were negative by virus neutralization assay, the convalescent-phase serum samples from the cat and her owner were positive; endpoints were 1:512 for the cat and 1:128 for the human.

The cat at first showed general signs, then gastrointestinal signs, and finally respiratory signs, similar to those observed in humans. Subsequently examined samples from the cat revealed viral RNA persisting for about 10 days. With the exception of a vomitus fluid sample collected on March 13, the amounts of viral RNA were relatively low. For this reason, and despite the simultaneous presence of a compatible clinical syndrome and a suggestive chronology of events, we cannot automatically rule out passive contamination of the cat’s samples by its owner.

To confirm the hypothesis of a productive infection of the cat, we conducted a series of serologic analyses by using 4 different testing approaches and targeting distinct viral protein targets. All procedures converged toward the same result: the convalescent-phase serum from the cat contained immunoglobulins against SARS-CoV-2, which were absent from the serum from control cats. These antibodies target several distinct viral proteins, and they caused a total neutralizing effect up to a much higher dilution than those from the owner’s serum. This household cat was therefore productively infected with the SARS-CoV-2 virus excreted by its owner, and the infection caused a nonfatal but nevertheless severe disease, mainly of the respiratory system (Videos 2–6).

Public health officials are still learning about SARS-CoV-2, but no current evidence indicates that pets play a role in spreading the virus. Therefore, taking measures against companion animals that may compromise their welfare is not justified.

Prof. Garigliany is a senior researcher and professor of General and Molecular Pathology at Liège University, Belgium. His primary research interests include host–pathogen interactions between animals and RNA viruses.

We thank Emmanuel Vidal and Sébastien Quesney for serologic testing. In addition, in alphabetical order, we thank K.-Y. Chen, C. Demeret, M. Franssen, and S. Temmam for their interventions in various capacities in the establishment of molecular and serologic diagnostics.

Page created: August 15, 2020
Page updated: August 17, 2020
Page reviewed: August 17, 2020
The conclusions, findings, and opinions expressed by authors contributing to this journal do not necessarily reflect the official position of the U.S. Department of Health and Human Services, the Public Health Service, the Centers for Disease Control and Prevention, or the authors' affiliated institutions. Use of trade names is for identification only and does not imply endorsement by any of the groups named above.