To preserve human health security, a global surveillance system able to rapidly detect, verify, and assess burgeoning outbreaks is key. The World Health Organization (WHO) International Health Regulations (2005) (1) provides an international and legally binding framework for the early detection of, reporting of, and response to any public health threat (e.g., infectious disease outbreaks) that might be of international concern using an all-hazards approach (2).

Event-based surveillance through informal sources now represents a critical source for epidemic intelligence (3). Almost all major outbreaks during 1994–2017 investigated by the WHO were early reported and identified through informal sources (4–7). One of the most valued, internationally acknowledged sources for epidemic intelligence activities that is also available as an open source is ProMED-mail (4,8). By relying on local media, professional networks, and on-the-ground experts, ProMED-mail staff produce reports on occurrences of emerging infectious diseases and outbreaks in near real-time. Specialist moderators curate these reports and provide subject matter expert commentaries.

ProMED-mail captures many reports of undiagnosed diseases (i.e., reports of public health events for which the diagnosis has not yet been found or reported by field professionals and cannot be classified). Events in these reports take place all around the world, and reports are provided without enough information to formulate a comprehensive risk assessment.

Even though an undiagnosed disease report in ProMED-mail might be an early signal of a major future event (e.g., outbreak), these reports have not been described in the literature. In this study, we aimed to provide a descriptive analysis of reports of undiagnosed disease events related to human health published on ProMED-mail since 2007 to determine whether these reports should be considered in further risk assessments. 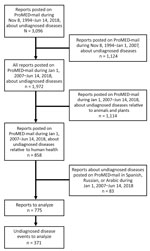 We conducted a retrospective analysis of all reports of undiagnosed diseases in the ProMED-mail registry that were published during January 1, 2007–June 14, 2018 (Figure 1). ProMED-mail staff provided all the archives for undiagnosed diseases and unknown diseases relative to humans, animals, and plants. We also collected data directly from Disease Outbreak News on the WHO website (https://www.who.int/csr/don/archive/country) for the period of the study; these data are also open access and disseminated as specified by Article 11 of the International Health Regulations (2005). From ProMED-mail reports, we collected data on case location (WHO zone), source of information, date of publication, number of cases, geographic distribution (i.e., regional, national, or international) of cases, affected population, and final diagnosis. We searched the WHO website for the existence of a related Disease Outbreak News report. We sought information on the confirmation (i.e., biologic confirmation) of the final diagnosis both in subsequent ProMED-mail reports and in Disease Outbreak News reports. When several notifications were linked to 1 undiagnosed disease event, we made the link between notifications using the date of occurrence and location data. We described quantitative variables using median and range and qualitative variables using percentages.

Undiagnosed diseases might be reported in various medical situations. They often occur in cases of delayed diagnosis of common diseases when access to appropriate medical care or services (e.g., epidemiologic investigations, laboratory testing) is limited. As such, most undiagnosed disease events occurred within low-resource countries. Undiagnosed disease reports less frequently account for unusual or unexpected diseases, such as imported or emerging diseases.

Reporting of undiagnosed diseases through ProMED-mail can be limited by climatic or geopolitical events in the region, which was probably reflected by the yearly and geographic variation in the reporting of undiagnosed disease events we observed. Although informal sources of public health information are valuable, the editorial content of the news sources the reports are based on can strongly limit their usefulness. Hence, our data analysis was limited by missing data.

Dr. Rolland is a public health resident who works in the Public Health Emergency Operations Center of the French Ministry of Health in Paris, France. She participates in the operational management of public health alerts in France as well as internationally. Her research interests are infectious diseases (including sexually transmitted infections), emerging diseases, and international health surveillance.

We thank the ProMED-mail staff, who made this research possible, and Elsa Dorne for her assistance in reviewing the language of the manuscript.

Page created: January 07, 2020
Page updated: January 07, 2020
Page reviewed: January 07, 2020
The conclusions, findings, and opinions expressed by authors contributing to this journal do not necessarily reflect the official position of the U.S. Department of Health and Human Services, the Public Health Service, the Centers for Disease Control and Prevention, or the authors' affiliated institutions. Use of trade names is for identification only and does not imply endorsement by any of the groups named above.