Human Exposure to Hantaviruses Associated with Rodents of the Murinae Subfamily, Madagascar

We conducted a national human serologic study of a hantavirus detected in Madagascar rodents using a commercial kit and a new ELISA targeting the virus. Our results suggest a conservative estimate of 2.7% (46/1,680) IgG seroprevalence. A second single-district study using the new ELISA revealed a higher prevalence (7.2%; 10/139).

Hantaviruses belonging to the genus Orthohantavirus, family Hantaviridae, are frequently zoonotic. Rodents are the usual reservoirs of human pathogenic hantaviruses and typically do not show obvious signs of disease (1,2). Transmission to humans usually occurs by inhalation of aerosols contaminated with urine or feces of infected reservoir animals (3). Hantaviruses are responsible for the severe illness hemorrhagic fever with renal syndrome (HFRS) and a milder form, nephropathia epidemica (NE), as well as for hantavirus cardiopulmonary syndrome (HCPS) (1).

Recent studies have described the geographic distribution and host range of novel hantaviruses in Africa and the Indian Ocean (4–6). In Madagascar, hantavirus RNA was identified by molecular analysis in Rattus rattus and Eliurus majori rats from a forest site in Anjozorobe district. The virus was named Anjozorobe virus (ANJZV) and is a genetic variant of Thailand orthohantavirus (THAIV) (5). In a more recent national study, Raharinosy et al. detected hantavirus RNA in 12% (n = 897) of R. rattus rats, and all the sequences obtained grouped with ANJZV (7), but they did not detect hantavirus RNA in R. norvegicus rats (0%; n = 124) (7), a species commonly associated with the cosmopolitan Seoul orthohantavirus (1). Because THAIV may cause HFRS in Southeast Asia (8), ANJZV could also be a human pathogen in Madagascar. In 1986, a limited study that used an immunofluorescence assay with Hantaan orthohantavirus (HTNV) and Puumala orthohantavirus antigens was conducted in areas around the capital and reported low titer hantavirus antibodies in the serum samples of 7/18 rat catchers in Madagascar (9).

We conducted a national study to assess hantavirus exposure in the general population of Madagascar. Sampling took place in conjunction with a recent rodent survey (7). In addition, because the original molecular hantavirus detection in Madagascar was from forest rodents (5), we also collected and analyzed human and rat samples from 4 sites close to forests.

As part of a retrospective national study on zoonoses, we collected human serum samples from 2011–2013. We then randomly recruited 1,680 asymptomatic participants (851 female and 829 male; average age 37 years; range 18–99 years). We conducted sampling in 28 sites, each with urban and rural zones; we sampled 60 persons per site, with 30 persons per zone (10). In addition, we used samples collected during 2015–2016 from 4 rural sites close to natural forest areas in Moramanga district, which is close to Anjozorobe district. For this study, we randomly selected 139 asymptomatic participants (31–36 persons per site; average age 29 years, range 5–75 years). We also conducted trapping of the rat population in these 4 sites and randomly selected 237 R. rattus rats (58–61 per site).

The national ethics committee of Madagascar authorized human studies (authorization no. 066-MSANP/CE on July 26, 2011; no. 049-MSANT/CE on July 03, 2012). We conducted animal studies in accordance with Pasteur Institute animal use guidelines (https://www.pasteur.fr/en/file/2626/download?token=YgOq4QW7). A committee of the Institut Pasteur de Madagascar approved the studies.

For the national study, we performed initial screening using the commercial Dobrava-Hantaan IgG EIA kit (Reagena Ltd, https://www.reagena.com) based on the recombinant nucleocapsid (N) protein from HTNV. HTNV and THAIV, along with other Murinae-associated hantaviruses (Appendix Table 1), exhibit close antigenic relationship (11). However, because 2-way cross-reactivity is not complete (12), we developed a new IgG ELISA based on ANJZV recombinant N protein produced by a baculovirus-mediated insect cell expression system. We used this assay to test all samples testing positive or borderline by the commercial kit and a subset of negative samples (Appendix). Based on the apparent increased detection ability of the ANJZV ELISA, we only used ANJZV ELISA for testing the human samples from the 4 sites close to forest areas.

After screening 1,680 serum samples with the commercial ELISA, we found 36 (2.1%) positive and 26 (1.5%) borderline samples. Using the custom ANJZV ELISA on these samples and a subset of 62 negative samples, we found 46 positive and 15 borderline (Appendix Tables 2, 3). Thus, the ELISA we developed specifically for ANJZV appeared to be more sensitive. To obtain a conservative estimate of seroprevalence, only samples testing positive by both assays or positive by 1 assay and borderline by the other were considered positive; testing yielded an overall prevalence of 2.7% (46/1,680; 95% CI 2.0%–3.7%) in the population; 30 male (1.8%) and 16 female (0.9%) participants tested positive. 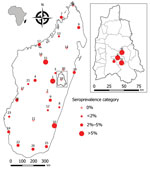 Figure. Geographic distribution of IgG hantavirus human seroprevalence in Madagascar for the 28 sites of the national-scale study and (inset) for the 4 sites close to forest in Moramanga district. Maps were...

Seropositive participants came from 20 of the 28 study sites (0–13.3% per site) distributed all over Madagascar (Table 1; Figure). Univariate generalized linear mixed models with site-zone as random effect indicated no effect of age, sex, or location (urban or rural), but we did find a slight suggestion of increased exposure in sites where our previous study (7) had detected infected rats (OR 3.0, 95% CI 0.78–11.5; p = 0.11).

Our results suggest the population of Madagascar is exposed to hantaviruses associated with the Murinae subfamily of rodents. The overall conservative prevalence estimate of 2.7% from the national-scale study, obtained using 2 ELISA assays, is similar to results from studies in some Africa countries where other confirmatory tests were used (3.9% in Cote d’Ivoire and 2.4% in the Democratic Republic of the Congo) (4,13). Although we believe some seropositive persons may have been exposed to other Murinae-associated hantaviruses, considering both ELISA results in humans and rodent infection data together (7), our observations are consistent with evidence that most were exposed to ANJZV. Specifically, the ANJZV ELISA detected more seropositive persons than the commercial kit, and the cosmopolitan Seoul virus, if present in rodents in Madagascar, is at low prevalence or patchily distributed (7). Because hantavirus infection rates in R. rattus rats appear higher at sites close to forest, more widespread testing with the ELISA developed for Anjozorobe virus is needed to confirm whether human communities in such areas are also at higher risk for infection. In addition, hospital surveillance studies are needed in Madagascar to determine if hantavirus infection occurs in patients, with testing focused on those with fever with unknown etiology, renal failure, or both.

Mr. Rabemananjara is a PhD student at the Virology Unit of Institut Pasteur de Madagascar. His research interests include hantaviruses in animal reservoirs (bats and other small mammals) and humans, as well as the circulation of arboviruses in Madagascar.

We thank all colleagues from the Virology, Plague and Epidemiology Units of the Institut Pasteur de Madagascar who aided with field and laboratory work. We thank Corinne Jallet for help with some ELISA assays and Rasa Petraityte-Burneikiene and Aurelija Zvirbliene for providing antigen for additional analysis. We thank Reagena for constructive exchanges during provision of the kits.

This work was supported by Wellcome Trust Fellowships (no. 081705 and 095171 to S.T.) and Institut Pasteur de Madagascar, and by PTR (Progamme Transversal de Recherche) HANTAREV at Institut Pasteur, Paris.

2These authors were co–principal investigators

Human Exposure to Hantaviruses Associated with Rodents of the Murinae Subfamily, Madagascar