Influenza A virus infection has rarely been documented to cause viremia. In 28 blood donations in Brazil that were deferred because of postdonation information, we identified influenza A(H3N2) virus RNA in 1 donation using metagenomic analysis. Our finding implies theoretical risk for viremia and transfusion transmission.

Influenza A virus is easily transmitted by respiratory aerosols and droplets and has high epidemic and pandemic potential (1). Influenza viremia may be established within 2–3 days before onset of clinical symptoms (2), implying that this virus is hypothetically transmissible by blood transfusion. However, transmission has never been confirmed, and efforts to detect influenza virus RNA among blood donors have been unsuccessful (3–5).

In 1 (4%) of 28 blood donations, we identified RNA fragments of influenza A. The donor, a 25-year-old woman, donated blood on January 28, 2019, after an interview in which she was approved as eligible for blood donation. Three days later (January 30) she reported low-grade fever, cough, and coryza to the blood center. The blood donation positive for influenza A was processed into packed red cells, plasma, and platelets, but because of the timely postdonation information report, all hemoderivatives were discarded. Because of the low severity of the reported symptoms, which were not directly related to the blood donation procedure, the donor was not followed up. 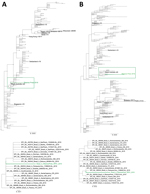 The viral metagenomic pipeline identified a 756-bp fragment of polymerase base (PB) 2 gene of influenza A, but targeted assembly using Burrow-Wheeler Aligner version 0.6 (http://bio-bwa.sourceforge.net) detected other genomic regions like matrix 1 and 2 (252 bp), nucleoprotein (257 bp), and polymerase acidic frameshift protein (707 bp). We directly confirmed influenza A using multisegment reverse transcription PCR (RT-PCR) as described previously (6). We then amplified the hemagglutinin and neuraminidase segments individually by conventional PCR (7) using the multisegment RT-PCR product as input volume and sequenced. Consensus sequences of hemagglutinin (477 bp) and neuraminidase (647 bp) were aligned with MAFFT 7.0 software (ThermoFisher Scientific) using a dataset obtained from GISAID (https://www.gisaid.org), selecting strains from Brazil that circulated during 2011–2019. The phylogenetic analysis with IQ-TREE 2.0 software (http://www.iqtree.org) using hemagglutinin (264 sequences) and neuraminidase (419 sequences) applying the K3Pu+F+G4 and TVMe+G4 substitution models demonstrated that the strain clustered with isolates circulating during the 2019 epidemic season. The influenza A in the donated blood was phylogenetically determined to belong to H3N2 type (Figure). We deposited the hemagglutinin sequence in GenBank under accession no. MT126243 and the neuraminidase sequence under accession no. MT126244.

Influenza A viremia has been reported during acute-phase illness, mainly in patients infected with more pathogenic influenza viruses, such as H5N1 (8). Our study demonstrates the asymptomatic presence of influenza A virus RNA in blood donors preceding symptom onset, which provides theoretical grounds for the possibility of influenza transmission by blood transfusion. A study performed by the American Red Cross on 1,004 samples from blood donors reporting postdonation influenza symptoms detected no influenza-positive samples by RT-PCR during the first H1N1 outbreak in 2009 in the United States (5). Other studies conducted during the 2009 H1N1 pandemic also detected no viral RNA in persons who donated blood during the incubation period and in whom influenza symptoms developed 2−7 days after donation (3,4).

Although our report is based on a single blood donation, the finding raises the theoretical possibility of transmission of influenza by blood transfusion, which may be of great concern for transfusion services during seasonal influenza outbreaks or pandemics. Unfortunately, we could not confirm whether the detected influenza virus H3N2 remained infectious in the donated plasma. Nevertheless, identification of influenza RNA is especially important because a substantial proportion of persons who receive blood transfusions may have permanent or transient immune dysfunction, which might lead to unfavorable clinical outcome if transfusion-acquired influenza infection occurs. The transfusion transmission of influenza remains understudied, and more detailed surveys are needed, including the assessment of influenza viremia in blood donors during seasonal outbreaks and confirmation of cell-associated peripheral blood circulation of influenza subtypes.

Mr. Bezerra is an MSc student in bioinformatics at Clinical Oncology, Stem Cells and Cell Therapy of the Faculty of Medicine of Ribeirao Preto, University of São Paulo. His research interests include emerging viruses in transfusion medicine and omics data analysis for their identification.

We thank Wilson Araujo da Silva, Jr., for providing the bioinformatic structure of the Blood Center of Ribeirao Preto and Sandra Navarro Bresciani for the figure.

Page created: April 18, 2020
Page updated: April 18, 2020
Page reviewed: April 18, 2020
The conclusions, findings, and opinions expressed by authors contributing to this journal do not necessarily reflect the official position of the U.S. Department of Health and Human Services, the Public Health Service, the Centers for Disease Control and Prevention, or the authors' affiliated institutions. Use of trade names is for identification only and does not imply endorsement by any of the groups named above.