Enterovirus D68 Subclade B3 in Children with Acute Flaccid Paralysis in West Africa, 2016

Until 2014, enterovirus D68 (EV-D68) infections had been identified only sporadically after its discovery in 1962, but since 2014, the virus has emerged to cause large outbreaks of respiratory disease worldwide. In recent years, EV-D68 has been reported in outbreaks in the United States, Canada, Europe, Asia, and Africa, affecting >2,287 persons worldwide (1–4).

The 2014 EV-D68 outbreak coincided temporally and geographically with increases in cases of acute flaccid myelitis (AFM), a subtype of acute flaccid paralysis (AFP), described by the Centers for Disease Control and Prevention as acute-onset flaccid weakness, combined with spinal cord lesions confirmed by magnetic resonance imaging, largely restricted to the gray matter, and spanning >1 spinal segments (5). In 2014, a total of 120 AFM cases in the United States (4,6) and >6 in Europe were associated with EV-D68 outbreaks. Subsequent biennial circulation of EV-D68 was associated with surges in AFM cases in the United States in 2016 and 2018 (7). In addition, 29 EV-D68–associated AFM cases were reported in Europe in 2016 (8). Africa, unlike Europe and the United States, has no active AFM surveillance. However, a 2016 study in Senegal reported 4 cases of paralysis associated with EV-D68 identified in fecal samples from children with AFP (2). With no AFM- or AFP-specific surveillance data available, we analyzed fecal samples collected for polio surveillance to better understand the extent of EV-D68 associated with AFP in West Africa and the genetic diversity of identified strains.

We retrospectively tested for EV-D68 in fecal samples from patients <15 years old with AFP. The samples were collected during June–September 2016 as part of routine poliomyelitis surveillance in Niger, Senegal, Guinea, Mauritania, Gambia, Guinea-Bissau, and Cape Verde. Specimens were collected 24–48 hours apart and <14 days of paralysis onset. We inoculated fecal specimens onto human rhabdomyosarcoma cells after using chloroform for EV isolation according to the procedures described in the laboratory manual for the World Health Organization’s Global Polio Laboratory Network (http://polioeradication.org/wp-content/uploads/2017/05/Polio_Lab_Manual04.pdf). We used a QIAmp Viral RNA Mini Kit (QIAGEN, https://www.qiagen.com) to extract RNA from 200 μL clarified fecal suspensions pretreated with chloroform. After RNA extraction, we screened all samples for EV-D68 by real time reverse transcription PCR as described elsewhere (2). For molecular characterization, the viral protein 1 region was amplified by a nested PCR and sequenced as described elsewhere (2). The alignment and phylogenic analyses of sequences obtained after cleaning were performed using MEGA 7.0 software (https://www.megasoftware.net). 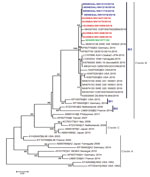 Figure 2. Phylogenetic relationships among EV-D68 strains detected in Guinea (red), Niger (green), and Senegal (blue), June–September 2016. We used the maximum-likelihood method based on the Tamura-Nei model method in MEGA7 (http://www.megasoftware.net)...

The first EV-D68–associated AFP case was detected in Guinea in June 2016. Most cases (10/16) in West Africa in 2016 were detected during July (Figure 1), similar to the seasonality that has been observed in several other countries, including the United States (12), the Netherlands (13), and Senegal (3). Most EV-D68–positive patients (64.3%) were children <5 years old, consistent with our previous report from Senegal (2,3). BLAST analysis (https://blast.ncbi.nlm.nih.gov/Blast.cgi) showed that all sequenced EV-D68 strains shared >98% homology with strains detected in Spain, Sweden, Germany, Japan, and China. Phylogenetic analysis of the viral protein 1 fragment revealed that all sequences from West Africa belonged to clade B, subclade B3 (Figure 2). Indeed, EV-D68 subclade B3 was the predominant strain reported in several global regions during the same period (9–14). Moreover, results from phylogenetic testing showed that EV-D68 strains in West Africa clustered with strains circulating in Spain (GenBank accession no. MH307403) and Sweden (accession no. MH674138), with a bootstrap value of 97.

Our study has some limitations. One ongoing issue is the inability to accurately describe the flaccid paralysis syndrome. Radiography imaging will probably help distinguish AFM from other AFP conditions. In addition, detecting EV-D68 in feces does not prove a causal relationship with AFM, although in this study all of the fecal samples tested negative for poliovirus and other enteroviruses, ruling out those possible alternative diagnoses. The absence of EV-D68 positive patients from the other West Africa countries may be due to the small number of samples collected and screened during the study period. EV-D68 prevalence in West Africa might be higher if respiratory samples, known to yield higher EV-D68 counts than fecal samples, were used for screening (6,14). Recently, the Pan American Health Organization and the World Health Organization provided updated recommendations to include respiratory sampling in suspected AFP cases (15).

This study provides evidence of more widespread EV-D68 circulation in West Africa in 2016 than previously reported. Enhanced surveillance for EV-D68, including collecting respiratory specimens from patients with confirmed cases of AFM, is needed to improve our understanding of this disease and its burden. Phylogeographic and phylodynamic studies based on full genomes are needed to better understand the introduction of EV-D68 in Africa during these different outbreaks.

Dr. Fall is a postdoctoral student in the Department of Virology at the Pasteur Institute of Dakar. His research interest is the molecular characterization of noninfluenza respiratory viruses (mainly enterovirus, rhinoviruses, and respiratory syncytial virus) in pediatric populations in Senegal.

We thank Mohamed Salif Sylla, Dabo Moustapha, Djenou Sompare, and Kathleen Victoir (DI-IPP) and acknowledge the US Centers for Disease Control and Prevention for its unwavering support.

This study was supported by the US Department of Health and Human Services through grant number IDSEP140020-01-00 via the International Division of Pasteur Institutes.

Page created: May 26, 2020
Page updated: August 19, 2020
Page reviewed: August 19, 2020
The conclusions, findings, and opinions expressed by authors contributing to this journal do not necessarily reflect the official position of the U.S. Department of Health and Human Services, the Public Health Service, the Centers for Disease Control and Prevention, or the authors' affiliated institutions. Use of trade names is for identification only and does not imply endorsement by any of the groups named above.

Enterovirus D68 Subclade B3 in Children with Acute Flaccid Paralysis in West Africa, 2016