We studied 31 US healthcare facilities to characterize trends in mycobacterial testing. During 2009–2015, testing for acid-fast bacilli increased 3.2% annually, and prevalence of pathogenic nontuberculous mycobacteria increased 4.5% annually. These increases were highest for subpopulations at high risk of infection, including older women, Asians, and patients with concurrent conditions.

Nontuberculous mycobacteria (NTM) are opportunistic environmental pathogens that can cause chronic lung disease (1,2). NTM are identified through laboratory testing for acid-fast bacilli, which test for all mycobacteria, including Mycobacterium tuberculosis. Multiple studies have described increasing NTM pulmonary disease (NTM PD) prevalence in the United States (1,3–6), a phenomenon that might be caused by true increase in disease rates, new efficient testing technologies, increased mycobacterial testing, or any combination of those. We assessed trends in mycobacterial testing rates and NTM PD prevalence from 2009 through 2015. We also analyzed factors associated with differential testing rates and prevalence across subpopulations.

The population for our study comprised persons whose medical encounters were represented in the Cerner HealthFacts Electronic Health Record database (https://sc-ctsi.org/resources/cerner-health-facts). We extracted microbiological, demographic, and clinical data for all patient encounters at 31 facilities across the United States that continually reported microbiological data (Appendix) and that speciated mycobacterial culture results from 2009 through 2015. We included only microbiology data collected from pulmonary body sites and that used the words “AFB” and “culture” in the testing description (i.e., mycobacterial culture tests). For analyses of mycobacterial culture testing and pathogenic NTM culture positivity rates (Appendix), we used the number of unique inpatients and outpatients at the 31 facilities as the population denominator.

To estimate mycobacterial culture testing trends, we used Poisson regression models fit through quasi-likelihood methods, which enable overdispersion (7). We analyzed trends within the overall study population and subpopulations stratified by age, sex, race/ethnicity, concurrent conditions, facility size, region, and facility teaching status. To identify variables associated with the odds of mycobacterial culture testing per facility encounter and the odds of pathogenic NTM culture positivity per facility encounter, we fit 2 mixed-effect logistic regression models to the data. We adjusted these models for patient age, sex, interactions between age and sex, race/ethnicity, teaching facility status, facility census region, encounter year, and whether the patient had a pulmonary computed tomographic scan or radiograph during the study period. The following concurrent conditions have been associated with a higher risk for NTM PD and were included as predictors in the model: bronchiectasis (4,8), chronic obstructive pulmonary disease (4,8), cystic fibrosis (CF) (9), lung cancer (4,5,8), and rheumatoid arthritis (8). We included deidentified patient number as a random effect to account for clustering among an individual patient’s multiple encounters.

Persons with mycobacterial culture tests were older and had more concurrent conditions than the overall population in the 31 study facilities: 20,670 (43%) of 48,563 persons with mycobacterial cultures were >65 years of age, compared with 1,984,443 (18%) of 10,802,134 persons in the overall study population (Table 1). Patients with the stated pulmonary conditions had higher rates of testing and NTM positivity than the overall study population. Bronchiectasis patients had mycobacterial culture tests (1,832/10,000 patients) and tested positive for NTM (339/10,000 patients) at higher rates than any analyzed subpopulation (other than persons with CF). Although patients who identified as Asian were tested at a lower rate than patients who identified as White or African American (48/10,000 patients), their positivity rate of 5.6 per 10,000 patients was the highest of the 3 racial/ethnic groups examined in this study (Table 1). 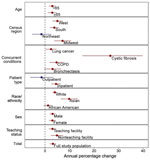 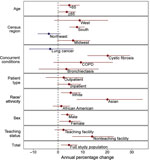 An important feature of our study is the analysis of both mycobacterial culture testing and NTM positivity data in a single population. We found that mycobacterial culture testing increased at an average of 3.2% per year (95% CI 1.9%–4.5%), whereas pathogenic NTM culture positivity increased an average of 4.5% per year (95% CI 1.2%–7.9%). This finding builds on previous work identifying an increase in prevalence of NTM PD (1,3–6). Increased testing might facilitate case identification and therefore might contribute to increasing NTM PD prevalence. Continued testing, particularly among populations at high risk, could advance understanding of NTM PD prevalence for improved clinical and public health planning.

Our analysis is consistent with prior studies showing the highest NTM PD prevalence among older women, Asians, and persons with CF, bronchiectasis, and chronic obstructive pulmonary disease (1). Our estimate of a 4.5% (95% CI 1.2%–7.9%) annual increase in NTM culture positivity is comparable with an estimated 7.5% (95% CI 6.7%–8.2%) annual increase in NTM PD prevalence from 2008 to 2015 made using a large managed care claims database (6). Further, many identified predictors of receiving a mycobacterial culture test are consistent with predictors of positivity, as identified in this and previous studies. This finding suggests that tests are being successfully focused toward groups such as older women and Asians that are at high risk for culture positivity (1).

Mycobacterial culture testing might be increasing because of greater awareness of NTM PD among groups at high risk. In 2012, the Cystic Fibrosis Foundation published guidelines recommending that CF patients be cultured annually for NTM (10). Furthermore, numerous studies published since 2010 have linked NTM PD to other concurrent conditions (4,8,9,11). These findings might contribute to improved awareness and increased testing, especially in populations at high risk for NTM PD.

Ms. Dean is an intramural research training award fellow at the National Institute of Allergy and Infectious Diseases. Her research interests include infectious disease epidemiology and methods.

1Preliminary results from this study were presented at the IDWeek Conference; October 2–6, 2019; Washington, DC, USA.

Page created: June 15, 2020
Page updated: August 19, 2020
Page reviewed: August 19, 2020
The conclusions, findings, and opinions expressed by authors contributing to this journal do not necessarily reflect the official position of the U.S. Department of Health and Human Services, the Public Health Service, the Centers for Disease Control and Prevention, or the authors' affiliated institutions. Use of trade names is for identification only and does not imply endorsement by any of the groups named above.