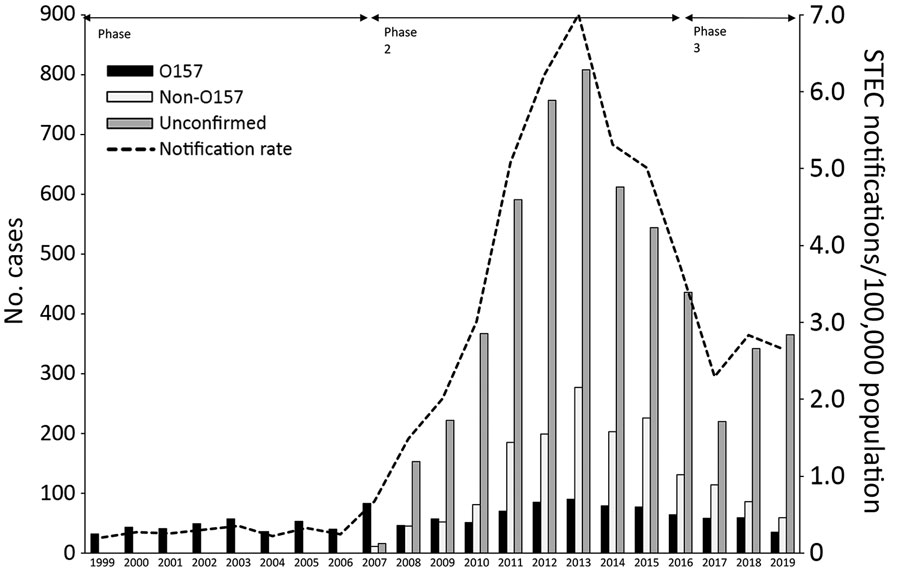 Figure. Number of reported Shiga toxin–producing Escherichia coli (STEC) infections per STEC group, the Netherlands, 1999–2019. In total, 8,307 infections were reported. For unconfirmed cases, no isolate was sent in for typing or isolates sent to the National Institute for Health and the Environment could not be confirmed or typed. During phase 1, 1999–June 2007, notification criteria were 1) notification for every person with diarrhea, stomachache, or both; STEC O157 confirmed via a culture; or demonstration of Shiga toxin (Stx) or Shiga toxin genes (stx) in feces; and 2) notification for every person with HUS; STEC O157 confirmed via a specific antibody response for STEC O157, a culture, or demonstration of Stx or stx1 or stx2 genes in feces. During phase 2, July 2007–June 2016, notification criteria shifted from notification for STEC O157 to notification of all STEC serotypes using the same 2 criteria. During phase 3, July 2016–December 2019, the first criterium was changed to notification of every person with diarrhea, blood in stool, vomiting or any combination, and <21 days between date of symptom onset and date of fecal sample taken in combination with STEC confirmation via a culture, demonstration of the combination of stx1 gene with the eae or escV gene, or demonstration of stx2 gene.

Page created: November 23, 2020
Page updated: December 21, 2020
Page reviewed: December 21, 2020
The conclusions, findings, and opinions expressed by authors contributing to this journal do not necessarily reflect the official position of the U.S. Department of Health and Human Services, the Public Health Service, the Centers for Disease Control and Prevention, or the authors' affiliated institutions. Use of trade names is for identification only and does not imply endorsement by any of the groups named above.