French Guiana is an overseas territory of France in northern South America; 95% of the country is covered by Amazon rainforest. The remote village of Saül, deep in the rainforest, had 152 permanent inhabitants in 2017 (INSEE, https://www.insee.fr/fr/statistiques/4271842), but the actual population in 2020 was 95. The nurse of the health center keeps an updated count of inhabitants in the village, a number that was stable because of isolation during the coronavirus disease (COVID-19) pandemic. In August and September 2020, French Guiana was experiencing simultaneous COVID-19 and dengue outbreaks. Several inhabitants of Saül were treated for dengue-like symptoms, including fever and diffuse muscle pain, but rapid diagnostic testing for dengue was negative. 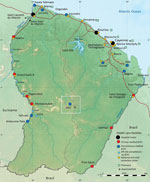 Saül houses 1 of 17 remote centers for prevention and care (RCPC) distributed throughout the inner territories of French Guiana (Figure 1). On August 11, 2020, a 55-year-old patient from Saül sought treatment with a dengue-like syndrome (DLS) including a marked meningeal component but tested negative for dengue. The patient was hospitalized on August 22 in Cayenne, the territorial capital. Bacteriologic, virologic, and parasitologic investigations were inconclusive. The Saül RCPC reported 15 additional patients with dengue-negative DLS during August 22–September 7. Consequently, an investigation was scheduled to begin in Saül on September 16. Sociodemographic data, clinical manifestations and evolution, and biological samples were systematically collected for each new case and, when possible, retrospectively for patients who sought treatment for DLS symptoms during August 11–September 16 (Appendix).

Figure 2. Spatial distribution of patient settlement around the town of Saül, French Guiana, and results of biologic testing for Oropouche virus by testing method. Geolocation is approximate to preserve patient anonymity....

On September 22, because results of serologic testing for common locally circulating arboviruses were negative, we performed real-time PCR for Oropouche-like virus on all available samples collected ≤5 days after the onset of symptoms (1). We performed viral isolations on Vero cells from PCR-positive samples and sequenced 1 isolate. Later, we performed microneutralization tests to complete biologic investigations on late serum samples. We collected clinical, biological, and anamnestic data, including localization (Figure 2), from medical and laboratory records (Appendix).

We obtained oral consent from patients to participate in the study and collected the biological samples as part of the care process. All data were collected on a standardized form and kept confidential to prevent disclosure of any personally identifiable information according to the requirements of the Commission Nationale de l’Informatique et des Libertés (https://www.cnil.fr).

During August 11–October 15, 2020, DLS was diagnosed in 41 (of 95 total) residents of Saül who sought treatment at an RCPC. Median age was 38 years (range 3–82 years, interquartile range 16–51 years) (Appendix Table 1); male-to-female ratio was 1.6:1 (Appendix Table 2). We tested blood samples from 28 patients; 23 were confirmed positive for Oropouche virus (OROV), 7 by PCR alone, 12 by microneutralization alone, and 4 by both. For the other 5 patients sampled, we were unable to confirm the diagnosis in the absence of a later sample to test for seroconversion. In addition, 17 residents, including 8 children, later reported having experienced DLS during the study period but did not visit the RPCP and therefore were not included in the study.

We obtained 5 viral isolates on Vero cells from PCR-positive serum samples; sequencing 1 of these isolates confirmed OROV infection. The attack rate in the village population was 43.2% (41/95); however, including residents with DLS symptoms who did not seek medical help would make the actual attack rate 61.1% (58/95). Few patients had underlying conditions. Symptoms by order of frequency were fever, headache, myalgia, and asthenia (Appendix Table 2). The illness followed 3 successive phases: a 2–4-day acute phase, followed by a remission phase, then a rebound of symptoms ≈7–10 days after onset. Symptom intensity decreased by the end of the second week. Persistent tiredness was reported by 73.2% patients (30/41). Elevated CRP levels of up to 10 mg/L were observed in 5 (23%) of 22 patients and lymphopenia in 10 (42%) of 24. The outbreak peaked on September 16 (Figure 2), suggesting that transmission was slowing toward the end of September. The environmental vector control intervention was first applied on September 23 and then again the week of October 6–13. The disease affected all areas of the village of Saül; the index case-patient lived on the forest edge (Appendix Figure).

In total, during 36 nighttime trapping efforts, we collected 254 mosquitoes, 242 (95%) Culex quinquefasciatus, and 31 Culicoides (biting midges), only 1 of which was C. paraensis, which we trapped indoors with a BG trap. We captured the other midge specimens, mostly members of the C. guttatus group of subgenus Hoffmania, near a cocoa tree orchard close to the village.

Since the early 1960s, >30 OROV outbreaks have been reported, mainly in the northern states of Brazil (2,3), Peru, Ecuador (4), and Trinidad and Tobago, where OROV was first reported in 1955 (5). We report an outbreak of OROV fever in French Guiana. OROV is an arbovirus (genus Orthobunyavirus), transmitted through several vectors, including C. paraensis midges and Cx. quinquefasciatus mosquitoes in the urban cycle and Aedes serratus and Coquillettidia venezuelensis mosquitoes in the sylvatic cycle (6). Vertebrate hosts include sloths (Bradypus tridactylus) and monkeys (Saguinus spp., Saimiri spp., Alouatta spp.) (7). Because vectors and hosts both exist in French Guiana, the report of an OROV outbreak in this country was not unexpected.

OROV PCR is not routinely performed and serodiagnosis is not available in French Guiana; therefore, some individual cases of OROV infection not associated with an outbreak may have gone undetected. However, it is unlikely that many cases from past outbreaks went undiagnosed. Indeed, French Guiana is familiar with arbovirus outbreaks and has the resources to investigate them (8–10). Moreover, the high attack rate, homogeneous distribution of cases across the village, and different age groups affected in this outbreak imply the population had no immunity against OROV. The high attack rate could be explained by Saül’s remoteness together with factors related to the COVID-19 pandemic. The village, which is accessible only by air, has been especially affected by the COVID-19 lockdown and subsequent movement restrictions, which have isolated it even further. Also, a decrease in army presence in the surrounding forest has led to a substantial increase in illegal gold miners passing through from Brazil, which could have resulted in imported OROV. In addition, unmaintained forest trails around the village may have changed the vector density, but further entomologic studies are needed to test this hypothesis. We captured an abundance of potential vectors, especially Cx. quinquefasciatus mosquitoes, within the village itself. The low capture yield of local Culicoides spp. midges might have been linked to seasonal trends.

As described in the literature, clinical manifestations were moderately severe, and symptoms recurred among most of the patients studied (11). After the entomologic investigation, vector control measures were implemented in week 40. The near-exclusive presence in the village of Cx. quinquefasciatus mosquitoes among possible vectors suggests this species as the most plausible vector for this outbreak. However, because vectors were captured and sampled near the end of the outbreak, other potential vectors active earlier cannot be excluded. The presence of Cx. quinquefasciatus mosquitoes on the coast and in main cities of French Guiana and the geographic expansion of OROV in South America in recent years call for increased epidemiologic surveillance in this region (12).

Dr. Gaillet is an infectious diseases specialist and epidemiologist. She created a mobile public health team in isolated communities in the most inaccessible villages of French Guiana, which intervenes on a wide range of public health issues, including the investigation of epidemics and increasing awareness of the prevention of coronavirus disease and many other topics.

1These authors contributed equally to the work.

Page created: July 30, 2021
Page updated: September 19, 2021
Page reviewed: September 19, 2021
The conclusions, findings, and opinions expressed by authors contributing to this journal do not necessarily reflect the official position of the U.S. Department of Health and Human Services, the Public Health Service, the Centers for Disease Control and Prevention, or the authors' affiliated institutions. Use of trade names is for identification only and does not imply endorsement by any of the groups named above.