We examined fecal specimens of patients with diarrhea from 3 continents for Tropheryma whipplei and enteropathogens. T. whipplei was most common in South Africa, followed by Singapore and Germany. Its presence was associated with the presence of other pathogens. An independent causative role in diarrhea appears unlikely.

Tropheryma whipplei is the causative agent of Whipple disease (1). The organism has also been detected in the feces of healthy or asymptomatic persons (2,3) and in the feces of patients with diarrhea (4–6). A causative role in gastroenteritis has been proposed.

To investigate the role of enteric T. whipplei, we examined fecal specimens of patients with diarrhea using conventional methods and PCR to detect enteric pathogens and T. whipplei. Our aim was to collect epidemiologic evidence regarding a causative role of T. whipplei in diarrhea.

The 3 participating sites were the Molecular Biology Laboratory, AMPATH (Centurion, South Africa); the Department of Pathology and Laboratory Medicine at KK Women’s and Children’s Hospital (Singapore); and the Institute of Microbiology and Hygiene at the University Hospital Regensburg (Regensburg, Germany). We examined fecal samples from patients with diarrhea that were submitted for microbiological laboratory diagnosis; we used a combination of conventional tests and multiplex PCRs covering the pathogens shown in Table 1, with differences owing to local arrangements (Appendix). 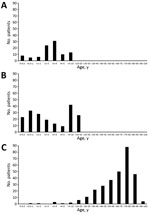 Figure. Age distribution of patients at 3 sites in study of Tropheryma whipplei in feces of patients with diarrhea: A) Centurion, South Africa; B) Singapore; and C) Regensburg, Germany.

We investigated a total of 590 fecal samples. In South Africa, 97 of 100 targeted samples were usable. In Singapore, 193 of 200 targeted specimens contained sufficient material; of these, 19 were originally submitted for bacterial culture, 77 for rotavirus antigen testing, and 97 for both. In Germany, we tested samples from 300 patients. In South Africa and Singapore, patients were mainly children, both outpatients and inpatients. In Singapore, the total included 13 immunocompromised children with hematologic/oncologic diseases and 1 with a short bowel syndrome. In Germany, all were inpatients and mostly elderly, about one quarter from the hematologic/oncologic ward (Figure).

Data on watery consistency and the presence of blood in feces were available for South Africa and Singapore, and microscopy data (e.g., erythrocytes, mucus, yeast cells) were available for South Africa (Appendix Table 2). There was no apparent relationship between these parameters and the presence of T. whipplei. Thus, an independent diarrheagenic role of T. whipplei was not apparent from these macroscopic and microscopic findings.

The mechanisms underlying the Campylobacter–Tropheryma association remain unclear, but may include similar modes of acquisition. T. whipplei can be transmitted by the fecal–oral route (7,8). Campylobacter spp. are commensals in the gut of a variety of animals, especially poultry; the main infection routes for Campylobacter species are foodborne and fecal–oral transmission (9). Both T. whipplei and Campylobacter can be found in sewage (9–11).

Our study’s first limitation was that it was done in real-life settings of diagnostic laboratories where the routine investigations were supplemented by additional PCR tests (Appendix). Pathogens tested and diagnostic techniques differed among the 3 laboratories but were identical within each laboratory between the specimens with and without T. whipplei. However, this diversity may even increase the robustness of data. The proportions of fecal samples with no pathogen detected were 81% in Germany, 57% in South Africa, and 29% in Singapore. These findings reflect not only the absence of pathogens but also the pathogen spectrum investigated; a higher number of different pathogens investigated will lead to more positive results, and Singapore had the most comprehensive tests. A high rate of negative findings limits the analyses concerning co-infections of T. whipplei with other pathogens.

Second, our study did not include asymptomatic controls, as did the Global Enteric Multicenter Study (12,13). In South Africa, T. whipplei was the most frequent fecal microorganism, followed by Shigella, rotavirus, and adenovirus, in descending order, the last 3 exactly as in the Global Enteric Multicenter Study. In Singapore, T. whipplei was third after rotavirus and norovirus, but the ranking of rotavirus may be an artifact because rotavirus antigen was the most frequent ordered laboratory test.

We postulate that the different prevalence of pathogens at the 3 locations (Table 1) is related not just to the different diagnostic strategies but probably also to different climate, development, and hygiene. The Sustainable Development Goals indices for water, sanitation, and hygiene were 68, 66, and 90 in South Africa; 98, 99, and 97 in Singapore; and 100, 100, and 100 in Germany (14). These data reflect the order of prevalence of T. whipplei in feces in the 3 locations, which is in accordance with a prevalence approaching 50% in children in Laos (15).

Using diagnostic specimens from microbiology laboratories on 3 continents, we were able to confirm that T. whipplei can be found frequently in the feces of patients with diarrhea (4,5). Across the 3 locations, the numbers of traditional enteropathogens were significantly increased in specimens also containing T. whipplei, and we found an association between the presence of T. whipplei and Campylobacter. Our findings support the hypothesis that enteric T. whipplei may not be causative for diarrhea but may possibly be a result of different sanitary and climatic conditions.

Dr. Feurle is an emeritus professor of internal medicine and gastroenterology at the DRK Krankenhaus Neuwied, a teaching hospital of the University of Bonn, Germany. His primary research interest is Whipple disease.

We thank Annette Moter and Thomas Schneider for their contributions to the process of conceiving the study protocol. We also thank the staff of the Microbiology Laboratory at KK Women’s and Children’s Hospital, Singapore, in particular, Liat Hui Loo and Han Yang Soong, for their contributions to conducting the Singapore part of the study. We thank John C. Allen for help with statistical analyses.

Page created: February 10, 2021
Page updated: February 21, 2021
Page reviewed: February 21, 2021
The conclusions, findings, and opinions expressed by authors contributing to this journal do not necessarily reflect the official position of the U.S. Department of Health and Human Services, the Public Health Service, the Centers for Disease Control and Prevention, or the authors' affiliated institutions. Use of trade names is for identification only and does not imply endorsement by any of the groups named above.