Nontuberculous mycobacteria (NTM) cause pulmonary and extrapulmonary infections in susceptible persons. To characterize the epidemiology of skin and soft tissue (SST) and disseminated extrapulmonary infections caused by NTM in the United States, we used a large electronic health record database to examine clinical, demographic, and laboratory data for hospitalized patients with NTM isolated from extrapulmonary sources during 2009–2014. Using all unique inpatients as the denominator, we estimated prevalence and summarized cases by key characteristics. Of 9,196,147 inpatients, 831 had confirmed extrapulmonary NTM. The 6-year prevalence was 11 cases/100,000 inpatients; source-specific prevalence was 4.4 SST infections/100,000 inpatients and 3.7 disseminated infections/100,000 inpatients. NTM species varied across geographic region; rapidly growing NTM were most prevalent in southern states. Infection with Mycobacterium avium complex was more common among patients with concurrent HIV and fungal infection, a relevant finding because treatment is more effective for M. avium complex than for other NTM infections.

Nontuberculous mycobacteria (NTM) are opportunistic bacteria that are abundant in soil and water, including natural and plumbing-associated water sources (1,2). For a minority of susceptible persons, exposure to NTM can result in extrapulmonary infections (3), including skin, joint, lymph node, and disseminated infections. Extrapulmonary infections, especially disseminated disease, typically occur among persons with congenital or acquired immunodeficiencies (e.g., HIV infection) (4) but can also be associated with medical or cosmetic procedures that expose a wound to sources contaminated with mycobacteria (5,6). A recently described outbreak identified disseminated infections with Mycobacterium chimaera after open heart surgery, arising from contamination of heater–cooler units (6).

The nationally distributed, hospital-based Cerner Health Facts EHR database (https://sc-ctsi.org/resources/cerner-health-facts) includes linked demographic, clinical, and microbiological information for ≈9 million US inpatients. Using this database, we identified all US patients hospitalized during 2009–2014 with positive NTM cultures from extrapulmonary sources (excluding M. gordonae because it is considered an environmental contaminant) (Appendix Table 1). Patients were classified as having SST disease, disseminated disease (including those with infections in blood, central nervous system, and sterile bone and joint sources), or both; patients with infections from abdominal sites, urinary system, or other body sites were also identified and grouped as other sources (Table 1; Appendix Tables 2, 3). Sources were further classified as sterile or not sterile and whether they were associated with a device, prosthesis, or surgical procedure (Table 2). We excluded from analysis 142 patients with isolates from unknown sources and 4,385 patients with isolates from pulmonary sources.

Patients with extrapulmonary NTM were described by demographic factors (age, sex, race, and geographic region) and clinical factors (underlying conditions and procedural history via codes from the International Classification of Diseases, Ninth and Tenth Revisions, and Current Procedural Terminology). To compare demographics by infection type, we used the Pearson χ2 test or analysis of variance, where appropriate. We calculated overall and annual inpatient prevalence estimates by determining the number of unique inpatients with >1 positive extrapulmonary NTM culture divided by the total number of unique inpatients identified during the study period among hospitals reporting >1 case of extrapulmonary NTM. Patients whose cultures grew multiple NTM species or had isolates cultured from multiple extrapulmonary sites were counted in each group unless specified. Statistical analyses were conducted by using R version 4.0.2 (https://www.R-project.org).

Of 9,196,147 unique inpatients from 275 inpatient facilities reporting culture results throughout the United States, laboratory-confirmed extrapulmonary NTM was reported for 998 unique species/source isolates from 831 patients at 89 hospitals. Isolates represented 321 (39%) patients with SST infections, 269 (32%) with disseminated infections, and 337 (41%) with infection at other sites. Both disseminated and SST infections were reported for 23 (2.8%) patients. Most isolates identified to the species level were Mycobacterium avium complex (MAC) (50%), followed by M. fortuitum (10%), M. abscessus (9.4%), M. chelonae (5.3%), and M. chelonae/abscessus (4.3%). Other species were rapidly growing NTM (8.7%), non–rapidly growing NTM (3.7%), or not speciated (7.9%) (Table 3).

Figure 1. Annual prevalence of extrapulmonary nontuberculous mycobacteria cases by year and site of infection among hospitalized patients in the United States, 2009–2014. SST, skin and soft tissue.

Underlying conditions included fungal co-infections (11%), HIV infection (13%), cancer (4%), and other immunodeficiencies (2%); 14 (2%) NTM patients had a history of invasive cardiac procedures (Table 4). A higher proportion of patients with MAC than with rapidly growing NTM had HIV infection (21% vs. 1.5%; p<0.001) and fungal infections (16% vs. 6.7%; p<0.001), and a higher proportion of patients with rapidly growing NTM had cancer (6.7% vs. 1.4%; p<0.001). Co-infections (including pulmonary pathogens) identified during the same hospitalization as NTM isolation were common; >1 concomitant pathogen of interest grew for 42% of patients (Appendix Table 4). 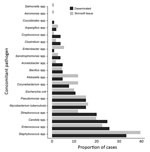 Using the Cerner Health Facts EHR database, we found that the annual prevalence of extrapulmonary NTM overall was stable over time and that SST NTM infections increased significantly, which could result from the increased number of patients taking immunosuppressive drugs (20% of patients in this cohort) or increased cosmetic procedures (e.g., tattooing, pedicures) (10,11). Although population-based studies have found a lower and stable prevalence of extrapulmonary NTM, it is possible that the higher prevalence we found results from patients having more severe infections that necessitate testing, increasing the chances of diagnosing this disease (4,11).

NTM infections varied by geographic region in prevalence, infection type, and mycobacterial species. Specifically, prevalence of extrapulmonary NTM was higher among hospitalized patients in the South, Midwest, and Northeast than in the West, although these high rates resulted from disseminated infection in the South versus a more even distribution of SST infections in other regions. Recent studies of extrapulmonary NTM in the United States have focused on specific geographic locations. In Oregon, Shih et al. (12) and Henkle et al. (4) analyzed all extrapulmonary NTM cases identified via statewide laboratory-based active surveillance efforts and estimated incidence rates to be 1.1–1.5 cases/100,000 persons/year, with only one third of those patients hospitalized (12). These estimates are substantially lower than those reported in North Carolina (13), where a similar surveillance-based study estimated the prevalence among residents of 3 counties to be ≈3 cases/100,000 persons. The differences in prevalence estimates between Oregon and North Carolina similarly reflect the regional differences that we observed; prevalence was higher in southern than in western states. The geographic variations in prevalence of extrapulmonary NTM cases that we found are also similar to what has been shown in US population–level pulmonary NTM studies (8,14,15), that residents of southern states are at increased risk for NTM lung disease, particularly among high-risk groups such as persons with cystic fibrosis (15–17). Differences by geographic region are largely associated with environmental factors, such as greater amounts of water on land and in the lower level atmosphere (14–16), which probably contributes to increased environmental abundance of mycobacteria. In addition to higher levels of exposure to mycobacteria, studies have identified that these high-risk areas also tend to have a higher proportion of rapidly growing NTM species relative to MAC or other mycobacteria (7,15,17), which can result in more severe disease with limited effective treatment options (3).

Among extrapulmonary NTM cases, mycobacteria species also varied greatly by infection source and underlying condition. Although MAC infections were most frequent across all types of extrapulmonary NTM cases, in certain regions rapidly growing NTM play a substantial role in causing disease. Nearly all patients with HIV had MAC; those with a history of cancer were more likely to have rapidly growing NTM. Given that species of rapidly growing NTM, particularly M. abscessus and M. fortuitum, which were the most prevalent species in this study, are typically more challenging to treat than MAC, these findings have implications for the clinical management of these patients with complex infections and medical conditions. Co-infections were common among patients with extrapulmonary NTM, and >1 other pathogen was isolated from nearly half of all patients. Co-infections may complicate treatment-related decisions, particularly if mycobacteria, which are typically slow growing, are detected after other pathogens and are not treated with appropriate antimicrobial drug therapy.

Because we evaluated ≈9 million unique persons from 275 hospitals across the United States, we were able to identify key epidemiologic patterns for what is otherwise a very rare disease with limited population-level data. Because our analysis included only hospitalized patients, we probably overestimated the true incidence of extrapulmonary NTM disease in the general population by selecting for generally sicker patients with more severe underlying disease. We may have missed less severe SST infections that did not require extensive treatment or hospital intervention. Because the hospitals included here represent only those that use the Cerner Health Facts system, this study does not include patients at other facilities, which may also affect our incidence calculations. Similarly, not captured here were surgeries, procedures, or prior medical events that occurred in other facilities, which may be associated with risk, infection type, and outcome. However, these limitations would be applied systematically to the entire study population and therefore would probably not alter the geographic or temporal patterns that we found.

Overall, extrapulmonary NTM disease remains rare with relatively stable incidence rates for disseminated NTM infections and modestly increased rates for SST infections. In similar studies assessing pulmonary NTM, rates appear to be steadily increasing in the general population and among high-risk groups such as persons with cystic fibrosis (8,17). Patients with extrapulmonary NTM typically include persons with HIV, other underlying immunodeficiencies, histories of surgical procedures, or other unique exposures that increase the risk for infection. In addition, we found that species variability is associated with geographic region; rapidly growing NTM are more prevalent in the southern United States than in other regions. Given the added treatment challenges that exist for these patients with often-complex conditions, knowledge of key trends and risks by patient-level factors and geographic location is critical for improving clinical outcomes and determining sources of infections that may be common to patients with pulmonary and extrapulmonary NTM.

Page created: January 04, 2021
Page updated: February 21, 2021
Page reviewed: February 21, 2021
The conclusions, findings, and opinions expressed by authors contributing to this journal do not necessarily reflect the official position of the U.S. Department of Health and Human Services, the Public Health Service, the Centers for Disease Control and Prevention, or the authors' affiliated institutions. Use of trade names is for identification only and does not imply endorsement by any of the groups named above.