Dromedary camels, which are capable of asymptomatic carriage of Brucella, are valuable domesticated animals in Bedouin culture, and unpasteurized camel milk has gained international popularity because of its alleged medicinal properties. Few reported brucellosis outbreak investigations involving camel milk have described families infected by milk from privately owned camels and have used serologic testing to confirm diagnoses (3,4). The standard tool for molecular typing of Brucella has been multilocus variable-number tandem-repeat analysis or multilocus sequence typing (MLST). However, whole-genome sequencing (WGS) is increasingly used for the study of genomic epidemiology of B. melitensis (5).

We report an outbreak of human brucellosis with unique epidemiologic characteristics, which originated from commercial, single-brand, unpasteurized camel milk; infection was diagnosed in 19 patients with a common exposure history over 4 months. We demonstrate the utility of WGS for brucellosis outbreak investigations. 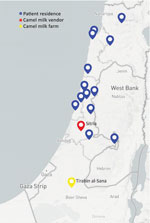 Figure 1. Geographic distribution of cases of Brucella melitensistraced to consumption of commercialized camel milk in Israel, 2016. Shown are the location of the camel farm in southern Israel from...

From July–November 2016, the Israeli Ministry of Health noted an increase in brucellosis cases in non-Arab patients in central and northern Israel, raising suspicion of a common source (Figure 1). An epidemiologic investigation noted patients were exposed to the same brand of camel milk. A total of 20 isolates were obtained from 19 patients across Israel (nos. 1–20; Table). Patients from shared households included 2 pairs of siblings and 1 married couple. We studied 2 isolates (nos. 1, 2) from an infant from whom B. melitensis was isolated from blood and cerebrospinal fluid. We also included 1 person (isolate no. 12) who consumed camel milk of an unknown brand.

The suspected vendor obtained milk from a Bedouin camel farm in southern Israel (Figure 1). Field investigation of the farm revealed 32 female and 2 male camels. A total of 4 female camels had positive serologic test results for Brucella, but none were available for further testing. We sampled 6 bottles of camel milk obtained from a natural food store carrying the suspected brand and recovered a few colonies of B. melitensis from 3 of the bottles.

Clinical isolates were submitted to the National Brucellosis Reference Laboratory (Kimron Veterinary Institute, Beit Dagan, Israel) for confirmation, and milk samples were cultured at the same laboratory. In total, 10 B. melitensis human isolates from the outbreak and 3 camel milk isolates (nos. 21–23) from the implicated source were available for sequencing. An additional 4 epidemiologically unrelated isolates were sequenced and used as outliers, including 1 isolate from camel milk (no. 24), 2 isolates from patients with B. melitensis with no camel milk exposure (nos. 26, 27), and 1 isolate from an unrelated patient with B. melitensis acquired after consuming camel milk (no. 25). Finally, we used a B. melitensis reference genome sequence from the National Center for Biotechnology Information Sequence Read Archive database (no. 28).

DNA was extracted from Brucella isolates by heat killing (80 C°, 10 min) and by using the DNeasy Blood & Tissue kit (QIAGEN, https://www.qiagen.com). Genomic libraries were prepared with a Nextera Flex kit (Illumina, https://www.illumina.com) and subjected to paired-end sequencing by using the Illumina Miseq or Nextseq platforms. Sequences have been deposited in the European Nucleotide Archive (BioProject PRJEB43660).

We describe an outbreak of brucellosis unique in its patient population, source of infection, chain of transmission, and use of WGS. Prior outbreak investigations of brucellosis have seldom used WGS to link the outbreak with samples from the implicated source. Here, WGS exposed genetic linkage between bottled camel milk and 8 isolates from 7 patients, providing conclusive evidence of this common source. Isolates obtained from the same person (nos. 1, 2) and that person’s sibling (no. 3) clustered tightly, providing internal validity to the discriminative power of WGS. WGS also associated isolate no. 12 (unknown camel milk brand) with the outbreak.

Two isolates (nos. 4, 9) from cases clustered apart from the outbreak strains. Because 4 female camels at the implicated farm had positive Brucella serologic test results, they might have harbored several different strains of B. melitensis, which could explain these results. We acquired all bottles of camel milk sampled during a single day, representing just 1 batch, and other batches were not tested. Therefore, the presence of additional clones implicated in this outbreak could not be ascertained.

Surprisingly, isolates 24 and 26 clustered with the outbreak strains, suggesting an unrecognized epidemiologic chain of transmission. This finding could reflect patterns of unregulated animal trade in Israel in which domesticated animals, including camels, are trafficked from Hebron (origin of isolate 26) throughout the Negev region to Bedouin communities (in this case Rahat [origin of isolate 24], the largest Bedouin city). Clustering of these outliers suggests that the outbreak might have been more widespread than documented.

The advantages of WGS in this outbreak investigation included the capacity to analyze both related and outlier isolates. This capability enabled us to resolve complex linkages between cases, suggesting unequivocal, temporal relationships that depict outbreak directionality and can aid future preventative measures.

In conclusion, we describe a unique B. melitensis outbreak linking human cases with commercially sold, unregulated camel milk. These results demonstrate that WGS can be a powerful tool for investigating transmission of brucellosis, a neglected zoonotic disease, in a world of modernized commercialism.

Dr. Svetlana Bardenstein is a veterinary doctor specializing in clinical microbiology and currently heading the World Organisation for Animal Health/Food and Agriculture Organization of the United Nations Brucella Reference Laboratory in Israel. Her main interest is the epidemiology of brucellosis in Israel.

We would like to thank all personnel of the Ministry of Health and Ministry of Agriculture and Rural Development who contributed to the investigation of the outbreak and incident management.

This work was supported by a grant from the Ministry of Agriculture and Rural Development (#33-08-0009).

Page created: March 30, 2021
Page updated: May 18, 2021
Page reviewed: May 18, 2021
The conclusions, findings, and opinions expressed by authors contributing to this journal do not necessarily reflect the official position of the U.S. Department of Health and Human Services, the Public Health Service, the Centers for Disease Control and Prevention, or the authors' affiliated institutions. Use of trade names is for identification only and does not imply endorsement by any of the groups named above.