To evaluate trends in bacterial causes of valvular endocarditis in swine, we retrospectively analyzed 321 cases diagnosed at Iowa State University Veterinary Diagnostic Laboratory (Ames, IA, USA) during May 2015–­April 2020. Streptococcus gallolyticus was the causative agent for 7.59% of cases. This emerging infection in swine could aid study of endocarditis in humans.

Bacterial endocarditis appears as the distinctive macroscopic lesions of vegetative valvular endocarditis (VVE). Among humans, one of the main causes of infective endocarditis is Streptococcus gallolyticus (formerly Streptococcus bovis), which reportedly causes 2%–10% of cases (1). Despite a lack of reports of S. gallolyticus pathogenicity in swine, this bacterium is considered to be part of the porcine enteric microbiome (2). The classic causes of swine VVE include Erysipelothrix rhusiopathiae, Streptococcus suis, and Trueperella pyogenes (3,4); however, knowledge of bacteria associated with VVE in swine is limited. To evaluate trends in bacteria isolated from swine with VVE, we retrospectively analyzed cases submitted to the Iowa State University Veterinary Diagnostic Laboratory (ISU VDL; Ames, IA, USA) during May 2015–April 2020.

During the 5-year period, ISU VDL diagnosed 321 cases of swine VVE in pigs 3–28 weeks of age. Cases were submitted from 20 states, including major swine-producing states in the US Midwest. For 255 (79.43%) of these cases, the causative agent(s) were detected by routine bacterial culture of the affected heart valves. Heart valves were swabbed with sterile cotton swabs and plated onto 5% sheep blood agar plates, and plates were incubated in 5% CO2 at 35°C and examined after 18–24 h and 48 h. Broth enrichment for Erysipelothrix spp. (5,6) was performed according to the discretion of the diagnostician. Bacterial identification was based on colony morphology, followed by speciation based on matrix-assisted laser desorption/ionization time-of-flight mass spectrometry (Bruker Daltonix, https://www.bruker.com).

For this study, we searched ISU VDL pathology reports for May 2015–April 2020 to identify all cases of endocarditis in swine based on the gross changes of vegetative endocarditis. For selected cases from which pure growth of S. gallolyticus was isolated from the heart valves, we performed bacterial biochemical analyses, sequenced 16S ribosomal RNA, and localized S. gallolyticus within lesions via RNA in situ hybridization (ISH) (RNAscope; TriStar Technology LLC, https://tristargroup.us). We also used immunohistochemistry to identify underlying immunosuppression. 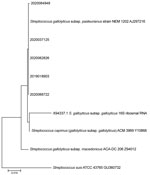 Predisposing causes of VVE development in swine are unknown; however, porcine reproductive and respiratory virus (PRRSV) and porcine circovirus 2 (PCV2) are notable immunosuppressive viruses that might increase susceptibility of a pig to bacterial infection and septicemia. Underlying PRRSV and PCV2 infection was determined for 17 of 22 swine with S. gallolyticus–associated VVE by using available formalin-fixed paraffin-embedded tissue blocks and immunohistochemistry staining of lung tissue, lymphoid tissue, or both. Only 2 of 17 swine were immunopositive for PRRSV, and all were negative for PCV2. This finding suggests that common immunosuppressive viral infections are not required for development of S. gallolyticus infection. Another compelling predisposing factor that warrants further investigation is intestinal mucosal damage in association with formation of S. gallolyticus porcine VVE; however, the temporal association between these events must be considered.

The pathogenesis of VVE is not completely known. Factors involved with development of lesions include the presence of transient/persistent bacteremia and preexisting damage of the valvular surface exposed to blood flow (1). Streptococci are commonly associated with VVE formation across species. Expression of microbial surface components (e.g., fibrinogen/fibronectin binding protein, collagen binding protein, and pili) that recognize host extracellular matrix molecules and increase adherence to damaged heart valves have been identified in various species of streptococci, including S. gallolyticus (11). Furthermore, streptococcal capsular protein has been shown to inhibit complement formation, leading to bacterial survival in the cardiovascular system (12).

Distribution of bacterial pathogens associated with swine VVE varies notably by age of the pigs. Age range for detection of S. suis was the widest, 3–24 weeks, and incidence peaked at 12–15 weeks. Similarly, S. equisimilis was detected in pigs 6–28 weeks of age and S. gallolyticus at 6–19 weeks of age; S. gallolyticus incidence peaked in 12-week-old pigs. Our data indicated a low number of E. rhusiopathiae isolations from VVE lesions, in contrast to previous reports of VVE in slaughter-age pigs (2). One major contributing factor to that finding is implementation of swine erysipelas vaccination of breeding herds, providing passive immunity and protection in nursery pigs (13), leading to a higher tendency to isolate this bacterium in the pigs at the grower/finisher stage of development (>12 weeks). However, inconsistent inclusion of Erysipelothrix spp. enrichment culture could have limited detection of this pathogen in our dataset.

Epidemiologic data for S. gallolyticus distribution in swine herds is limited. The reported S. gallolyticus–associated VVE cases were from different locations in 6 states (Missouri [5/22], Iowa [4/22], Illinois [3/22], Indiana [3/22], Arkansas [2/22], North Carolina [2/22]); 3 cases were from undetermined locations. Information regarding the type of swine production system and genetic sources was not recorded. In addition, this geographic information is limited to cases that were submitted to the ISU VDL. Thus, association with predisposing factors, such as husbandry and management, and the endemic status of this pathogen among domestic swine is unknown.

Our data on the frequency of detection of bacterial agents in swine with VVE reshapes the contemporary understanding of common causes of VVE in US domestic swine herds and identifies S. gallolyticus as an emerging cause of bacterial endocarditis in swine. This finding is supported by the frequent isolation of pure-growth S. gallolyticus from affected valves and direct detection of this agent within lesions via ISH. Determining factors that predispose swine to systemic infection, examining lesion distribution in other tissues, and reproducing the disease in an experimental setting would position swine as a highly translatable model of S. gallolyticus infectious endocarditis for the study and treatment of endocarditis in humans.

We thank all the necropsy technicians and laboratory staff at ISU VDL for their assistance on this project.

Page created: November 10, 2021
Page updated: December 20, 2021
Page reviewed: December 20, 2021
The conclusions, findings, and opinions expressed by authors contributing to this journal do not necessarily reflect the official position of the U.S. Department of Health and Human Services, the Public Health Service, the Centers for Disease Control and Prevention, or the authors' affiliated institutions. Use of trade names is for identification only and does not imply endorsement by any of the groups named above.