Sylvatic Transmission of Chikungunya Virus among Nonhuman Primates in Myanmar

Several endemic and emerging arboviruses, such as chikungunya (CHIKV), Zika (ZIKV), and dengue (DENV) viruses, have evolutionary origins in nonhuman primates (NHPs) (1,2). These pathogens have adapted sylvatic to urban transmission cycles by using humans as amplifying hosts where NHPs are no longer required for virus maintenance. However, sylvatic arbovirus transmission cycles involving NHPs could act as sources of human infections, which would affect public health. NHPs could enable reemergence of arbovirus infections after immunity has waned following human–mosquito–human transmission. Sylvatic cycles can also provide selective environments where new viral strains can emerge.

CHIKV circulates in distinct enzootic, sylvatic transmission cycles in old world monkeys in the forests of sub-Saharan Africa (2). Limited data are available on sylvatic CHIKV transmission in Asia, but seroconversion has been detected in cynomolgus macaques (Macaca fascicularis), pig-tailed macaques (M. nemistrina), black-crested Sumatran langurs (Presbytis melalophos), and dusky leaf monkeys (Presbytis obscura) in Thailand (3,4), and virus has been isolated from long-tailed macaques in Malaysia (5). A sylvatic ZIKV lineage in Africa, infecting Cercopthecidae primate species, is known to circulate widely (6). The only positive ZIKV serology findings in primates in Asia have been in orangutans (Pongo pygmaeus) in Borneo, Malaysia, but those exposures were likely from an urban strain (7). Sylvatic DENV cycles occur in the forests of Malaysia in Macaca and Presbytis spp. monkeys (8) and also in West Africa; sylvatic DENV-2 circulates regularly between Erythrocebus patas monkeys and various Aedes spp. mosquitoes in Senegal (8). Seroprevalence of Japanese encephalitis virus (JEV) has been reported in cynomolgus monkeys, Japanese macaques (M. fuscata), green monkeys (Chlorocebus sabaeus), and pig-tailed macaques in several countries in Asia (4,9,10).

Myanmar is among the least studied but most heavily forested region in Asia, and CHIKV, ZIKV, DENV and JEV are highly endemic in humans. We investigated whether Myanmar peri-urban primates, living near the largest urban city of Yangon, are exposed to arboviruses of public health concern and could be sources of spillover or recipients of spillback of human pathogenic arboviral diseases. 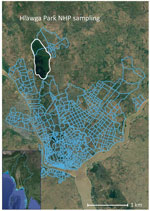 We identified virus-reactive antibodies among NHPs in Hlawga National Park, suggesting prior exposure to arboviruses, but we did not detect viruses by using PCR, suggesting absence of active infections. We found 33% (39/119) of NHPs were seropositive for CHIKV and 4% (5/119) were seropositive for JEV (Table); all serum samples were negative for ZIKV, West Nile virus, yellow fever virus, and tick-borne encephalitis virus. Using bivariate analysis, we showed specimens collected during the dry season were more likely to be seropositive for CHIKV (p = 0.05). Greater proportions of adult NHPs appeared to be seropositive for CHIKV; however, the difference was not statistically significant. We found no statistically significant associations between sex, age class, or species and specific arbovirus exposure. CHIKV and JEV in NHPs in Myanmar have not been reported, likely because of limited surveillance. Our findings extend the geographic range of potential sylvatic cycles for CHIKV to forests and peri-urban areas of Myanmar.

Our results indicate that NHPs were exposed to CHIKV during a period with no or limited human–mosquito–human transmission, suggesting that seropositive samples resulted from sylvatic exposures. IgG against CHIKV E2 protein can be detected up to 21 months postinfection (11). If similar kinetics occur in NHPs and extend to the E1 protein, NHP exposures to CHIKV could have occurred during 2013–2014 or earlier. However, in 2017, we detected CHIKV antibodies in NHPs that were <5 years of age, indicating exposure during an interepidemic period. Human cases of CHIKV were not reported by the Myanmar Ministry of Health during 2011–2018 (12), and CHIKV outbreaks are not commonly underreported because a large proportion of infected persons have indicative arthritic manifestations. In 2019, health officials reported widespread outbreaks of CHIKV in Mandalay, Nay Pyi Taw, Kachin State, Tanintharyi, and Yangon regions of Myanmar, indicating reemergence of the virus (12).

We studied an NHP population that lived in a forested area outside of Yangon and could have played a role in the reemergence of CHIKV in humans. The large proportion of NHPs that were exposed indicated the virus was circulating among sylvatic mosquitos and primates in this park. The absence of reported human infections during the potential period of NHP infection suggested that spillover from humans to NHPs via mosquitoes was unlikely. Aedes aegypti and A. albopictus mosquitoes, the two primary urban vectors of CHIKV, are also known to feed almost exclusively on humans in the region, providing further evidence that NHP exposures to CHIKV in our study population were of sylvatic origin (13).

Our findings indicate that JEV is circulating at the periphery of Yangon, and NHPs can be occasional incidental hosts. JEV is endemic in Myanmar, particularly in the Yangon region (14). NHPs are not thought to be potential reservoirs, but are dead-end hosts; they produce a low viremia that cannot subsequently infect mosquitoes (1). Low levels of viremia produced in experimental studies and sylvatic cycles involving waterfowl or pigs are well documented. Furthermore, JEV is transmitted to humans by infected Culex spp. mosquitoes (most commonly Culex tritaeniorhynchus), which feed on many mammals in the region (15), making it more plausible that NHPs could be incidental targets of this mosquito species.

We did not confirm NHP exposure to DENV or ZIKV. We identified positive samples by using the Luminex assay, but those samples tested negative when the plaque reduction neutralization assay was used for confirmation. DENV is endemic in humans in Myanmar, and our findings indicate that spillback of urban DENV strains to NHPs is not common in this region or was not detected in our sample size. Given the limited knowledge of the scope of human ZIKV circulation in Myanmar and lack of entomological data, further research is needed to examine potential sylvatic ZIKV cycles among NHPs in Asia.

Our study demonstrates the importance of conducting surveillance of peri-urban primates in regions of high arbovirus transmission and the need for less invasive methods that improve feasibility. Future research on molecular epidemiology of arboviruses in humans, NHPs, and mosquitoes is needed to confirm whether exposures result from potential sylvatic cycles of ongoing transmission or spillback events from urban strains. A heightened awareness of new CHIKV outbreak potential in humans living near NHPs in Hlawga National Park is warranted. Buffer zones between parks and human settlements might reduce future cross-species arbovirus transmission.

Dr. Smiley Evans is a research epidemiologist at the One Health Institute, University of California, Davis, CA, USA. Her research focuses on disease transmission dynamics between humans and wildlife and the effects of biodiversity on disease emergence.

We thank the Livestock Breeding and Veterinary Department, the Forest Department, and the Department of Medical Research of the Republic of the Union of Myanmar for their support of this research. We thank Than Toe, Than Swe, Khin Maung Win, and Aung Than Toe for their guidance on working in Myanmar.

The opinions expressed by authors contributing to this journal do not necessarily reflect the opinions of the National Institutes of Health or US Agency for International Development.

Page created: October 07, 2022
Page updated: November 21, 2022
Page reviewed: November 21, 2022
The conclusions, findings, and opinions expressed by authors contributing to this journal do not necessarily reflect the official position of the U.S. Department of Health and Human Services, the Public Health Service, the Centers for Disease Control and Prevention, or the authors' affiliated institutions. Use of trade names is for identification only and does not imply endorsement by any of the groups named above.

Sylvatic Transmission of Chikungunya Virus among Nonhuman Primates in Myanmar