Since emerging in 2001, Eurasian avian-like (EA) swine influenza A(H1N1) virus has gradually become the predominant lineage and continues to circulate among pigs in China (1–3). Introduction of the 2009 pandemic H1N1 virus (pH1N1) among pigs has increased its reassortment with EA H1N1 swine influenza A viruses (IAVs), and several reassortant variants with the potential to infect humans have been detected in China (4–8).

Multiple genotypes have been identified in EA H1N1 swine IAVs from pigs in China, and recent data suggest that the potentially pandemic genotype 4 (G4) reassortant has predominated among swine populations in China since 2016 (4,8). To clarify their prevalence and genotype characterizations, we isolated 32 swine IAVs in China during 2018–2020, including 6 novel reassortant H3N1 viruses that carry the hemagglutinin (HA) gene derived from human H3N2 lineage, and conducted phylogenic analysis of 8 gene segments from these viruses.

During January 2018–December 2020, we collected 1,006 swab samples from pigs with symptoms typical of swine influenza, such as fever and cough, on pig farms across 6 provinces (Shanghai, Jiangsu, Zhejiang, Tianjin, Hebei, and Shandong) in China. We isolated viruses using MDCK cells and determined viral whole-genome sequences by Sanger sequencing. We isolated a total of 32 swine IAVs from the 1,006 swab samples, an isolation rate of 3.18% (Table). To determine the phylogenetic evolution of the 32 isolates, we performed genetic analyses using available sequences of related viruses from the GenBank and GISAID (https://www.gisaid.org) databases. 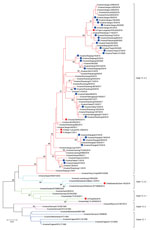 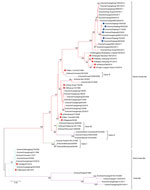 Phylogenetic analysis revealed that the HA genes of 26 viruses isolated in the study were grouped within clade 1C.2.3 of EA H1N1 lineage (Figure 1). However, the HA genes of the 6 novel reassortant H3N1 viruses were located in the recently circulating human-like H3N2 lineage and shared the highest genetic identity (99.7%–99.9%) with a swine H3N2 virus (A/Swine/Guangdong/NS2701/2012) in China (Figure 2). The neuraminidase (NA) genes of all 32 isolates were grouped within the EA H1N1 lineage (Appendix Figure). On the basis of sequence analysis of the HA and NA genes, we identified the 32 swine IAVs isolated in this study as EA H1N1 (n = 26; isolation rate: 2.58%) and H3N1 (n = 6; isolation rate: 0.6%), indicating that EA H1N1 was the predominant virus subtype circulating among the sampled pig population in China.

Origins of the 6 internal gene segments, polymerase basic (PB) 1 and 2, polymerase acidic (PA), nucleoprotein (NP), matrix (M), and nonstructural (NS) genes, were remarkably diverse: EA H1N1, pH1N1, and TRIG (triple-reassortant internal gene) lineages (Appendix Figure). Among 6 EA H1N1 swine viruses, all internal gene segments were of EA H1N1 lineage. Among 26 reassortant EA H1N1 and H3N1 viruses, the PB2, PB1, PA, and NP genes all originated from the pH1N1 lineage; the M genes were mainly from both the pH1N1 and EA H1N1 lineages. Almost all NS genes originated from the TRIG lineage, but 2 originated from the pH1N1 lineage. On the basis of phylogenetic analyses of the 8 gene segments, including from HA and NA genes, we identified the viruses isolated in our study as G1 (n = 6), G2 (n = 2), G4 (n = 10), G5 (n = 8), and novel H3N1 (n = 6) viruses, according to the genotype classification existing at that time (7,8). We isolated viruses year-round to capture seasonal strains. Over the 36-month survey period, G1 viruses disappeared after 2018, G2 viruses were sporadically detected in 2018–2019, and G4 viruses, with an isolation rate of 1.0%, became a predominant genotype beginning in 2018. In our annual surveillance, we found another predominant virus genotype, G5, that had an isolation rate of 0.8%. These results suggest that the internal genes of the pH1N1 lineage had become predominant in contemporary swine IAVs among the pigs in the survey region.

Of note, in late 2020, we detected the H3N1 swine IAVs in 6 isolates (all from Zhejiang Province), indicating that this is a novel emerging recombinant genotype. Phylogenetic analyses demonstrated that the 6 novel H3N1 reassortant swine IAVs contained NA genes from the EA H1N1; PB2, PB1, PA, NP, and M genes from pH1N1; and NS genes from TRIG swine lineages. This combination is similar to the potentially pandemic G4 viruses except for the HA genes, suggesting that the emergence of novel H3N1 reassortant swine IAVs was a natural reassortant event that derived from G4 and H3N2 swine IAVs.

Because of their susceptibility to avian, swine, and human IAVs, pigs are regarded as a mixing vessel for generating novel reassortant influenza viruses capable of replicating and spreading among humans (9,10). Implications for human health reinforce the importance of continuous surveillance of swine IAVs in the pig population. China has the most varied swine influenza virus ecosystem in the world and different subtypes simultaneously circulate among pigs (11,12). The emergence of potentially pandemic G4 EA H1N1 virus has increased the chances of reassortment with enzootic swine IAVs and the subsequential emergence of novel reassortant swine IAVs.

Our study, based on swine epidemiologic data from China, demonstrates that EA H1N1 swine influenza virus and its reassortant viruses circulate in swine populations and pose potential threats to human health. Furthermore, we isolated and documented the genetic evolution of novel reassortant H3N1 viruses between potentially pandemic G4 EA H1N1 and H3N2 swine IAVs. These findings highlight the need for surveillance for novel H3N1 viruses in swine and human populations to enable early interventions to avert outbreaks and protect animal and human health.

Dr. Wang is a PhD student at the Shanghai Veterinary Research Institute, Chinese Academy of Agricultural Sciences, China. His primary research interests include the epidemiology and pathogenic mechanisms of influenza viruses.

This work was supported by grants from National Natural Science Foundation of China (31970175) and China Agriculture Research System of MOF and MARA (NYCYTX-009).

Page created: April 13, 2022
Page updated: June 18, 2022
Page reviewed: June 18, 2022
The conclusions, findings, and opinions expressed by authors contributing to this journal do not necessarily reflect the official position of the U.S. Department of Health and Human Services, the Public Health Service, the Centers for Disease Control and Prevention, or the authors' affiliated institutions. Use of trade names is for identification only and does not imply endorsement by any of the groups named above.