We report 2 cases of Spiroplasma ixodetis infection in an immunocompetent patient and an immunocompromised patient who had frequent tick exposure. Fever, thrombocytopenia, and increased liver aminotransferase levels raised the suspicion of anaplasmosis, but 16S rRNA PCR and Sanger sequencing yielded a diagnosis of spiroplasmosis. Both patients recovered after doxycycline treatment.

Spiroplasma spp. are intracellular organisms that belong to the class Mollicutes, which include Mycoplasma spp. These bacteria have a single-layer cell membrane, cannot be visualized by Gram staining, require special substrates for growth, and can be diagnosed by genetic methods (6). Plants, insects, and ticks are known reservoirs (7). S. ixodetis was initially reported in Ixodes pacificus ticks from Oregon, USA (8), and has since been detected in many arthropod species, including Ixodes ricinus ticks in several countries in Europe, but not yet in Sweden (9,10). We report S. ixodetis infections in an immunocompetent patient and an immunocompromised patient after tick exposure in Sweden.

Oral and written informed consent were obtained from the 2 patients. Case-patient 1 was an 81-year-old previously healthy woman who sought care at the emergency department of Kalmar County Hospital (Kalmar, Sweden) in July 2021 because of a 3-day history of fever (temperature up to 39°C) and mild headache. She reported frequent tick exposure in southeastern Sweden but no history of opportunistic infections or immunosuppressive diseases or treatments that would have compromised immune defenses. She was admitted because of clinical suspicion of anaplasmosis. 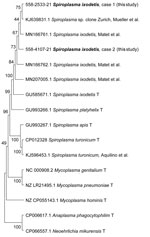 A slight increase in IgG convalescent-phase titer against A. phagocytophilum was observed (from 1:160 to 1:320 during a 4-week interval; reference titer <1:160). However, the result was disregarded because of the negative A. phagocytophilum PCR result at admission.

The fever decreased promptly when oral doxycycline treatment (100 mg 2×/d) was initiated. The patient was discharged, and treatment was continued for a total of 10 days. Upon follow-up, the patient had recovered and had no remaining laboratory result abnormalities (Table). Total serum immunoglobulins, including IgG subclasses, were within reference ranges, and a follow-up blood sample was negative by 16S rRNA PCR.

Case-patient 2 was a 76-year-old man who had insulin-dependent type 2 diabetes and Crohn’s disease who had been given infliximab maintenance therapy. He was on a prednisolone taper after an exacerbation of his inflammatory bowel disease. The patient sought care at the emergency department of Visby County Hospital (Visby, Sweden) in October 2021 for a 2-week history of spiking fevers and fatigue. He reported multiple tick bites throughout summer and had been given penicillin V for erythema migrans. No other focal signs or symptoms were reported.

Given the progressive clinical picture, cefotaxime was replaced on day 5 by doxycycline (100 mg 2×/d), which resulted in return of liver and kidney functions to reference values within 1 week and improved clinical condition (Figure 2). The patient was discharged after 11 days; doxycyline treatment was continued for 21 days. A serum sample (1 mL) from day 4 was analyzed for N. mikurensis and A. phagocytophilum by PCR and unbiased bacterial 16S rRNA sequencing. Analysis identified S. ixodetis in serum that had 99.86% sequence homology with a reference strain of S. ixodetis. The patient sequence has been deposited in GenBank (accession no. OL636350) (Figure 1). The patient remained well 6 weeks after symptom onset and had no residual abnormal laboratory results.

We report 2 cases of systemic S. ixodetis infection that were presumably acquired by tick bites in southeastern Sweden. This organism has not been reported in Ix. ricinus ticks from Sweden, but A. phagocytophilum, N. mikurensis, Rickettsia spp., and Babesia spp. are endemic tickborne microorganisms that may cause febrile illness. However, thrombocytopenia and increased levels of liver enzymes rarely occur in neoehrlichiosis (13). A. phagocytophilum infections can cause thrombocytopenia and increased levels of liver enzymes, but are an uncommon cause of fever in Scandinavia, and Babesia spp. affects primarily severely immunocompromised persons (14).

A case of human Spiroplasma infection was reported in Germany during 2002 and involved a 4-month-old premature child who had unilateral cataract and uveitis (1). Three case reports have described systemic infections caused by Spiroplasma spp. The first case involved a 73-year-old woman from Spain who had selective IgM deficiency, rheumatoid arthritis, fever, myalgia, headache, and bilateral conjunctivitis; she was receiving tumor necrosis-α and interleukin-6 inhibitors (4). S. turonicum was identified by 16S rRNA PCR performed on blood cultures. Her fever was unresponsive to cefuroxime but resolved after she received doxycycline and levofloxacin for 2 months.

The second case involved a 70-year-old woman from Switzerland who had diffuse abdominal pain and fatigue. She was a lung transplant recipient and was afebrile. Laboratory analysis showed, consistent with our cases, thrombocytopenia and increased liver enzyme levels. Liver biopsy and blood samples analyzed by 16S rRNA PCR identified Spiroplasma sp. that had 98.2% homology with S. ixodetis, referred to as Spiroplasma sp. Zurich (5). The patient received doxycycline and azithromycin for 2 months and slowly recovered.

In reports on systemic S. ixodetis infection, doxycycline was prescribed in combination with either levofloxacin or azithromycin (2). In our study, the patients showed improvement after doxycycline monotherapy and were cured without relapse, supporting the notion that doxycycline is effective against S. ixodetis infections. The previously described systemic infections were caused by other species of Spiroplasma (S. turonicum, S. apis, and Spiroplasma sp. Zurich). The route of transmission was unclear except for the S. apis case, for which a hornet sting was the plausible route of transmission. In contrast, the S. ixodetis patients we describe were most likely infected via tick bites acquired in the coastal areas of southeastern Sweden, including the islands of Öland and Gotland.

Our study suggests an association between tick exposure and human S. ixodetis infection. Previous case reports of human Spiroplasma infection have been associated with an immunocompromised state, either in the form of immature eyes of newborns or conditions requiring immunosuppressive treatment. We report a systemic Spiroplasma infection in an apparently immunocompetent person. However, immunosenescence of the aged immune system might have compromised innate or acquired immune defenses (15).

In conclusion, we report 2 case-patients who had S. ixodetis infection and acute febrile illness after tick exposure. Treatment with doxycycline was successful. This finding shows the clinical utility of unbiased 16S rRNA analysis for correct diagnosis and treatment, as well as its potential for identifying novel pathogens in the febrile host. We are developing a Spiroplasma-specific PCR that might increase sensitivity of detection. S. ixodetis is an emerging pathogen that should be considered in patients with febrile illness after tick exposure.

At the time of the study, Dr. Eimer was an infectious disease and respirology consultant at Gotland County Hospital, Visby, Sweden. He is currently a scientist at the Centre of Immunology and Microbial Infections, Sorbonne University, Paris, France. His primary research interest is treatment for multidrug-resistant tuberculosis.

This study was supported by the Swedish Research Council grants 2016-02043 (to T.S.) and 2020-01287 (to C.W.), core funding from Linköping University (to T.S.), and the Swedish state under the agreement between the Swedish government and the county councils, the ALF agreement (ALFGBG-827291).

Page created: June 03, 2022
Page updated: July 20, 2022
Page reviewed: July 20, 2022
The conclusions, findings, and opinions expressed by authors contributing to this journal do not necessarily reflect the official position of the U.S. Department of Health and Human Services, the Public Health Service, the Centers for Disease Control and Prevention, or the authors' affiliated institutions. Use of trade names is for identification only and does not imply endorsement by any of the groups named above.