Nocardia neocaledoniensis as Rare Cause of Spondylodiscitis

Nocardia neocaledoniensis is a rare species of Nocardia bacteria, identified in 2004 in hypermagnesian ultramafic soil of New Caledonia. Culture of this opportunistic pathogen from spinal biopsy samples confirmed N. neocaledoniensis spondylodiscitis in an immunocompromised man. Isolation of this unusual species from spinal biopsy samples illustrates its underappreciated ability to cause invasive infection.

Nocardia are aerobic bacteria, order Corynebacteriales (1), that are ubiquitously found in soil and water. Nocardia are typically opportunistic pathogens in immunocompromised patients (2). Nocardia neocaledoniensis is responsible for skin and soft tissue infections (3,4); its involvement in invasive infections has been 1 brain abscess and 1 case of bacteremia (5,6). We report a case of spondylodiscitis caused by N. neocaledoniensis.

In December 2021, in Amiens, France, a 68-year-old man with diabetes sought care from a rheumatologist after a 2-month history of persistent low-back pain radiating to his right hip and markedly reducing his ability to walk. He had a medical history of rectal cancer diagnosed 1 year earlier, for which liver metastasis was treated by surgery and 13 cycles of chemotherapy during March–September 2021. 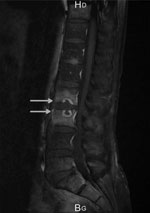 Figure. Sagittal gadolinium magnetic resonance image of spine of a patient in France with spondylodiscitis caused by Nocardia neocaledoniensis. Image shows erosion of the cortical end plate of L2...

The patient was apyretic, but his general status was deteriorated (asthenia, weight loss, and anorexia). Examination revealed marked tenderness over his mid-lumbar spine at L2–L3 and stiffness of the lumbar spine. Clinically relevant results of blood analysis showed elevated erythrocyte sedimentation rate (94 mm/h) and C-reactive protein (16 mg/L). A computed tomography (CT) scan showed erosion and end-plate deterioration of L2–L3, and a magnetic resonance imaging scan confirmed the diagnosis (Figure). Results of blood cultures were negative, but results of culture of 2 spinal biopsy samples collected during CT were positive in brain–heart infusion broth after 72 h of incubation at 37°C. Direct gram-stained smears showed unexpected branched gram-positive rods. After 48 h of subculture on a blood agar plate under aerobic conditions, the culture showed white opaque and dry Nocardia-like colonies. Matrix-assisted laser desorption/ionization time-of-flight (MALDI-TOF) mass spectrometry (Bruker, https://www.bruker.com) identified N. asteroides, with a score of 1.87. Sanger sequencing of the 16S rRNA (1,120 bp) gene from the isolate (GenBank accession no. OP028079) did not adequately discriminate between N. neocaledoniensis and N. asteroides. Therefore, we determined nucleotide sequences of the secA1 (468 bp) and sodA (386 bp) genes and compared them with those from reference strains, as previously described (7,8). The isolate from the patient showed 99.1% similarity to secA and 99.5% to sodA sequences of the N. neocaledoniensis DSM 44717T strain compared with <97.6% similarity to the N. asteroides ATCC 19247T strain (Appendix Figure).

We performed susceptibility testing according to Clinical and Laboratories Standards Institute 2018 recommendations by using Sensititer RAPMYCO AST Plate (ThermoFisher Scientific, https://www.thermofisher.com). Based on the results of susceptibility testing (Table), treatment was intravenous ceftriaxone (2 g 2×/d) plus oral trimethoprim/sulfamethoxazole (160/800 mg 6×/d) for 1 week, followed by oral tedizolid (200 mg 1×/d). After 3 weeks of antimicrobial chemotherapy, the low-back pain completely regressed and the patient was mobile; after 6 months (antimicrobial therapy completion), the radiologic findings had slowly improved, and the patient was considered cured.

Immunosuppressive therapy, which decreases cellular immunity, is often associated with nocardiosis (2). The cancer patient we report had received immunosuppressants for 7 months. Common clinical manifestations are pulmonary infection caused by inhalation of Nocardia in aerosols and cutaneous infection after penetrating injuries (2). Both primary infection sites could be considered for this patient, who is a gardener. Indeed, the systematic thoracic CT scan performed in September 2021 showed ground-glass opacities with 2 excavations in the left upper lobe, which might be interpreted as manifestations of pulmonary nocardiosis, and the patient reported having had hand injuries 4–5 months before the diagnosis. Because the patient was asymptomatic, no microbiological specimens were collected before December 2021; he was twice tested for SARS-CoV-2 by PCR, in October and December, and results were negative. The cause of the pneumonia could not be determined, and the primary infection site of nocardiosis remains unknown for this patient.

Molecular methods based on housekeeping genes (16S rRNA, hsp65, rpoB, gyrB, sodA, and secA1) DNA sequences have characterized ≈100 species of Nocardia (7, 8). For identifying Nocardia, MALDI-TOF mass spectrometry is more rapid and cost-effective than molecular methods. Several studies reported correctly identifying Nocardia to the species level (≈95%) by using commercial databases with common species (9,10). We used MALDI-TOF mass spectrometry with the Bruker reference library version 9.0, updated with 8,326 main spectra profiles. This database includes 52 Nocardia species but not N. neocaledoniensis, unlike the Vitek MD database (bioMérieux, http://www.biomerieux.com). Because N. neocaledoniensis is closely related to N. asteroides (7), the isolate was misidentified (with a low score of 1.87) as N. asteroides with the Bruker library. Although sequencing of 16S rRNA is usually adequate for identifying Nocardia isolates, in this case, the combined sequence analysis of secA and sodA genes was required to accurately discriminate between the closely related N. neocaledoniensis and N. asteroides.

This report of spondylodiscitis caused by N. neocaledoniensis provides evidence that N. neocaledoniensis is an opportunistic pathogen involved in invasive infection that may be underdiagnosed. Indeed, few commercial MALDI-TOF mass spectrometry databases correctly identify this uncommon species; thus, enlarging of most databases is necessary. Until then, molecular biology-based methods should still be considered the best standard for accurate identification.

Dr. Choquet is an assistant in the department of bacteriology at the Amiens University Hospital, Amiens, France. Her primary research interests are diagnosis and treatment of bacterial infections.

Nocardia neocaledoniensis as Rare Cause of Spondylodiscitis