Pertussis in the Netherlands: an Outbreak Despite High Levels of Immunization with Whole-Cell Vaccine

In 1996, a sudden increase in pertussis incidence was reported in the Netherlands (2.1 per 100,000 in 1995, 18 per 100,000 in 1996). Although not all potential surveillance artifacts could be excluded, it is highly probable that the data reflect a true outbreak. However, the cause of this increase has not yet been determined. Further research is directed to the severity of disease and a possible mismatch between the vaccine and the circulating Bordetella strains.

In 1996, 2,771 cases of pertussis were reported to the Inspectorate of Health in the Netherlands (population 15 million), compared with 319 cases in 1995. With epidemic cycles expected every 3 to 5 years and a recent outbreak in 1994, this rise was unexpected (1). After the introduction of pertussis immunization with a whole-cell vaccine in the National Immunization Program (1952), the incidence of pertussis in the Netherlands decreased significantly. Children are immunized at ages 3, 4, 5, and 11 months with a diphtheria, tetanus, pertussis, and inactivated polio vaccine (DTP-IPV), and vaccine coverage for pertussis, for at least three immunizations, is 96% at the age of 12 months. Until the 1980s, the incidence of pertussis seemed very low, because only incidental cases were reported. However, in the last two decades, pertussis has been endemic, and epidemic peaks have appeared.

The surveillance of pertussis is based mainly on notification, which was made obligatory by law in 1976. Because the availability and interpretation of serologic tests changed in the 1980s and the absence of a clear case definition for notification seemed to have influenced surveillance, a restrictive case definition that included criteria for laboratory diagnosis was introduced in 1988. Therefore, we have limited this report to notification data from 1989 onwards. The annual incidence of pertussis notification from 1989 to 1995 is shown in Figure 1. In this period, the case definition includes defined clinical symptoms and laboratory confirmation. The clinical symptoms are a serious cough lasting more than 2 weeks or cough attacks or cough followed by vomiting in combination with at least one of the following symptoms/findings: apnea, cyanosis, characteristic cough with whooping, subconjunctival bleeding, leucocytosis, or contact with a person with confirmed or suspected pertussis in the previous 3 weeks. Laboratory confirmation is defined as either positive culture of Bordetella pertussis or Bordetella parapertussis or positive two-point serology, i.e., the finding of a significant rise (> 4-fold) of IgG antibodies against pertussis toxin and/or IgA antibodies against B. pertussis in paired sera. The case definition is highly specific, but results in significant underreporting.

We compared the number of cases reported per 4-week-period in 1996 with the number reported in 1994, the year with the highest incidence in recent years (Figure 2). It appears that an unexpectedly large number of pertussis cases was reported (18 per 100,000) in 1996. The reports came from all over the country. No geographic clustering was observed, even in regions with pockets of low vaccination coverage or at the borders of the country (close to Germany, where vaccination coverage for pertussis is low). 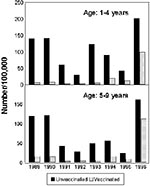 Figure 3. Estimated incidence of pertussis for unvaccinated and vaccinated children aged 1-4 years and 5-9 years based on notification records and assuming a coverage of 96% for the entire population.

In view of the increase in pertussis reporting in 1996, the first issue to be addressed was whether this reporting reflected a true increase in pertussis incidence or was a surveillance artifact. If considerable underreporting is assumed, an increase due to improved compliance to the notification system or increased alertness should be considered. However, in the first two quarters of 1996, there is no apparent reason for such an assumption. Nonetheless, after the first reports of the observed rise, both publicity and increased awareness of the disease by physicians and patients might have influenced reporting.

Serodiagnosis for the country as a whole is done by a single reference laboratory at the National Institute of Public Health and the Environment; thus, the data provided by the laboratory can be used for nationwide surveillance. Furthermore, the reference laboratory collects strains of B. pertussis from regional public health laboratories, and the number of strains received also reflects the epidemic curve. The epidemiologic curve derived from these sources over the past years is consistent with the notification data.

Since laboratory confirmation is part of the case definition, changes in serodiagnostic practice might have influenced notification. Frequently, no conclusive results are obtained from serology: a second serum sample may not be submitted, or the first serum sample may be taken late after onset of disease, thereby missing the dynamic phase of the immunoresponse. Recently, cut-off values for antibody titers characteristic for the acute immunoresponse after natural infection with B. pertussis have been determined by comparing the titer distribution in the healthy population, in recently vaccinated children, and in sera longitudinally collected after natural infection. Since 1993, high titers in acute-phase sera are reported to be "suggestive for recent infection with Bordetella pertussis" (2). It can be imagined that such cases are reported, albeit not strictly in accordance with the case definition.

To exclude the possibility that the rise in notification was the result of reporting cases diagnosed with positive one-point serology only, we linked the notification and serodiagnosis databases. (The data were taken from January 1993 to September 1996.) Special permission to link the databases was given by the Inspectorate of Health. It appeared that some notification was based on positive one-point serology as early as 1993, and this proportion increased from 20% in 1993 to 33% in 1994. It remained at this level in the subsequent years. Thus, the 1996 increase in notification cannot be attributed to this change in serodiagnostic practice.

Although not all potential surveillance artifacts could be excluded, it is highly probable that the surveillance data reflect a true pertussis outbreak. The outbreak could have been caused by 1) decrease in vaccination coverage, 2) decrease in vaccine quality, 3) interference with other vaccines, 4) changes in circulating strains of B. pertussis that are not covered by vaccine-induced immunity, or 5) a combination of these factors. A decrease in vaccination coverage has not been observed in the (accurate) reporting system. The whole-cell vaccine used was produced in the National Institute of Public Health and the Environment and meets international standards. There was no sign of a gradual deterioration of vaccine quality as determined for product release by the mouse protection test.

In April 1993, vaccination against Haemophilus influenzae type b (Hib) was added to the immunization program. The polyribosylribitolphosphate tetanus toxoid conjugated vaccine (PRP-T) was administered simultaneously with the DTP-IPV, although on different limbs. Interference of Hib vaccination with the immunoresponse to pertussis vaccine has been described (3). In a prospective serologic study on the potential interference in the Netherlands, this effect was not observed (4). Furthermore, the increase of pertussis in 5- to 9-year-old vaccinated children, who never received Hib vaccine, was similar to the increase in the 1- to 4-year-old age group (Figure 3). Decreased vaccine efficacy due to interference of Hib vaccination is, therefore, very unlikely.

Molecular typing of B. pertussis isolates collected since 1945 indicated a shift in population structure, possibly due to the introduction of whole-cell vaccine (5). Further, antigenic variants of B. pertussis distinct from the strains incorporated in the vaccine appear to have emerged (6). It might be possible that circulating strains of B. pertussis have become less sensitive to vaccine-induced immunity. The abrupt increase in the proportion of vaccinated patients reported in all age groups suggests such a change.

Data from other countries in Europe indicate that the pertussis epidemic is restricted to the Netherlands. However, a resurgence of pertussis has been noted in the United States since the late 1980s and in Canada since 1991. No single factor has been found to explain this resurgence (7-10).

The decrease in pertussis notification in the Netherlands at the end of 1996 may indicate a seasonal variation in incidence. The 1996 data, including those on hospital admissions, are still being analyzed. These data will give insight into the severity of the pertussis epidemic among infants. Protection of these infants is the main reason for pertussis vaccination. In January 1997, active (monthly) surveillance by pediatricians of cases among hospitalized children was added to the routine surveillance based on notification and laboratory surveillance.

A prospective study is being considered to assess efficacy of the whole-cell vaccine, including differentiation of severity of illness and number of immunizations received, if the outbreak continues. Cooperative studies to determine the distribution of restriction fragment length polymorphism types and antigenic variants of B. pertussis in various countries in Europe, Asia, and North America are under way. Also, the immunogenicity of the Dutch whole-cell vaccine is being assessed: whether it has changed over time and how it compares to published immunogenicity data of whole-cell vaccines with known, prospectively determined, vaccine efficacy (11).

In conclusion, in the Netherlands a sudden increase of pertussis notification has been observed, which seems to reflect a true increase in incidence. Nevertheless, the cause of this increase has not been definitively determined. A possible mismatch between the vaccine and the circulating Bordetella strains is being investigated.

Pertussis in the Netherlands: an Outbreak Despite High Levels of Immunization with Whole-Cell Vaccine