Since its discovery in Houston, Texas, in 1987, the Asian "tiger mosquito" Aedes albopictus has spread to 678 counties in 25 states. This species, which readily colonizes container habitats in the peridomestic environment, was probably introduced into the continental United States in shipments of scrap tires from northern Asia. The early pattern of dispersal followed the interstate highway system, which suggests further dispersal by human activities. The Public Health Service Act of 1988 requires shipments of used tires from countries with Ae. albopictus to be treated to prevent further importations. Given the extensive spread of the mosquito in the United States, it is questionable whether such a requirement is still justified. Ae. albopictus, a major biting pest throughout much of its range, is a competent laboratory vector of at least 22 arboviruses, including many viruses of public health importance. Cache Valley and eastern equine encephalomyelitis viruses are the only human pathogens isolated from U.S. populations of Ae. albopictus. There is no evidence that this mosquito is the vector of human disease in the United States.

Established populations of Aedes albopictus, the Asian "tiger mosquito," (1) were first discovered in the continental United States in Harris County, Texas, in August 1985 (2). (Ae. albopictus was introduced into Hawaii sometime before 1902 [3]). This mosquito may have become established in the region even earlier since an adult female was collected in Memphis, Tennessee, in 1983 (4). Ae. albopictus probably entered the United States in shipments of used tires from northern Asia, where the species is widely distributed (5-7). Beginning January 1, 1988, the U.S. Public Health Service required that all used tires arriving at U.S. ports from areas known to be infested with Ae. albopictus be dry, clean, and fumigated or otherwise "disinsected" (8). However, by the time the disinsection requirement was put in place, existing populations had become established in 15 states.

Ae. albopictus is both a nuisance and a potential disease vector. Anecdotal reports from local mosquito control agencies suggest that it has become a major pest mosquito problem in many communities in the southeastern United States. Laboratory studies show that this species is susceptible to and can transmit many arboviruses of public health importance (9-12). In this article, we summarize the reported distribution and dispersal of Ae. albopictus in the past 10 years and review surveillance for infection and transmission of arboviruses.

Distribution and Dispersal of Aedes albopictus

A national database of the distribution of Aedes albopictus is maintained as a passive surveillance system (13); the system is periodically stimulated by letters and telephone calls to mosquito and vector control professionals throughout the United States, as well as by articles in professional journals and newsletters and presentations at professional meetings. Data obtained from a standardized reporting form sent to potential collaborators to ensure standardization of the data are entered into a computerized database written in EpiInfo (14). Summary data are extracted from the database for reports or for transfer to a desktop mapping program. 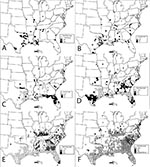 Figure 1. Reported distribution of Aedes albopictus, the Asian "tiger mosquito," in the continental United States, 1985-1996. Maps were generated by merging the EpiInfo database into the Atlas geographic information system.

Figure 1 shows the changing distribution of Ae. albopictus over time. The mosquito is widely distributed in the southeastern United States. Established infestations are less common northward and westward, presumably because of less hospitable environments. The absence of reports from some states may reflect lack of surveillance rather than absence of the mosquito. This species may have been present in some areas for many years before discovery (particularly true in areas without active mosquito surveillance or control programs). In certain states, such as South Carolina and Kentucky, the abrupt discovery of Ae. albopictus in a large number of counties was the result of university graduate students' research.

The postulated relationship between dispersal and major transportation routes would be expected for a species transported largely by human activities such as the commercial movement of scrap tires for retreading, recycling, or other purposes. Several of the 28 mosquito-infested sites not located on the interstate system were major tire retreading companies, other businesses that deal with large numbers of used or scrap tires, or illegal tire dumps.

Once populations of the mosquito become established, local transport and active migration should disperse the mosquito throughout the surrounding area. As would be expected if the original infestation were in Texas, the proportion of Ae. albopictus-infested counties on the interstate system in Texas had fallen from 1 (100%) of 1 in 1985, to 13 (65%) of 20 in 1986, and to 23 (58%) of 39 in 1987.

This distribution pattern can be explained in other ways. At least early on, searches might have been limited to Ae. albopictus in the major cities. Since most major cities are connected by interstates, it is impossible to separate these two possibilities. Moreover, most of the active vector control programs and other activities that would involve surveys for this mosquito are probably located in larger cities, which are connected to the interstate highway system.

Ae. albopictus as a Disease Vector

Ae. albopictus is also a competent experimental vector of the following Flaviviruses: dengue (DEN) serotypes 1, 2, 3, and 4, Japanese encephalitis, West Nile, and yellow fever viruses. In the case of an additional Flavivirus, St. Louis encephalitis virus, the amount of circulating virus in naturally infected avian hosts is generally insufficient to infect the mosquito (16).

DEN and Japanese encephalitis viruses have been isolated from specimens of Ae. albopictus collected outside the United States, and these viruses can be transmitted vertically under experimental conditions (9). Recently, isolation of DEN-1 virus from Ae. albopictus larvae in Brazil has been reported (17). Ae. albopictus has been involved in the transmission of DEN viruses in southeast Asia, southern China, Japan, and the Seychelles (18). If DEN viruses were introduced into areas of the United States with dense populations of Ae. albopictus, this mosquito could conceivably act as a vector. However, the classic epidemic vector of DEN viruses, Ae. aegypti, is also present in many of the southeastern states; in areas where Ae. aegypti is abundant, this species might be expected to play a far more important role in DEN transmission than Ae. albopictus.

Since the discovery of Ae. albopictus in the United States, field-collected Ae. albopictus from several areas have been tested for arboviruses. From 1987 to 1995, 122,879 specimens were tested from 12 states (Table 2). Four viruses have been isolated: Potosi (19-22), EEE (23), KEY (23, 24 and R. Nasci, unpub. data), and Cache Valley (CV) virus (CDC, unpub. data). Tensaw virus was isolated by the Texas State Department of Health (23). The geographic and temporal distributions of these virus isolations are shown in Table 3.

Aside from EEE and CV viruses, the viruses isolated from Ae. albopictus in the United States are not of public health importance. The association of Ae. albopictus with EEE virus in nature has been restricted to a single incident in Polk County, Florida, in 1991. The presence of a large tire dump (ca. 1.5 million used tires) within a known enzootic focus of EEE virus (the Green Swamp) may have led to an unusual virus-vector association (23). Follow-up studies at the dump site in 1992, after the tires had been shredded, yielded fewer than 1,000 Ae. albopictus (none infected) (Mitchell and Niebylski, pers. comm.), and EEE virus has not been isolated from field-collected specimens of this species since the original episode. CV virus was isolated from a pool of Ae. albopictus collected in Jasper County, Illinois, in 1995 (CDC, unpub. data). During the same year, a case of human disease with diverse clinical manifestations due to CV virus was reported in a patient who presumably contracted the infection while deer hunting in Anson County, North Carolina (25). However, there is little reason to suspect that Ae. albopictus was involved in this incident. CV virus was isolated repeatedly from several other genera and species of mosquitoes before Ae. albopictus was present in the continental United States and, thus far, CV virus has been isolated from Ae. albopictus from only a single pool of specimens in Illinois.

Ae. albopictus is firmly established in the United States. In the 10 years since its discovery, this species has spread throughout much of the East. The species occurs in all counties in at least four states - Delaware, Florida (26), Georgia (27), and South Carolina. It probably occurs in all or most counties in Alabama, Mississippi, and Louisiana, but surveys from those states are incomplete. Ae. albopictus seems to be approaching the northern limit predicted by Nawrocki and Hawley (28). The westward dispersal of this mosquito has been very slow, perhaps because the drier environment of the Great Plains region inhibits westward movement of this species. Data suggest that the current practice of requiring the disinsection of used tires entering the United States from other countries with Ae. albopictus does not influence the dynamics and spread of this species within this country. If disinsection is to remain in force, other justification will be needed.

Observations on early dispersal of Ae. albopictus are consistent with the hypothesis of dispersal by human activities, probably movement of scrap tires through the interstate highway system. This information might be useful in designing monitoring programs for possible future introductions of mosquitoes.

Collectively, the above information indicates that Ae. albopictus is a competent vector for a wide variety of arboviruses under experimental conditions, has been found to be naturally infected with DEN, Japanese encephalitis, Potosi, KEY, Tensaw, CV, and EEE viruses, and can serve as an epidemic vector of DEN viruses. The capacity of Ae. albopictus to vertically transmit certain arboviruses may also enhance the possibility of establishing new enzootic and endemic foci of some viruses. Ae. albopictus is a major biting pest throughout much of its range and is of justifiable concern to mosquito control and public health agencies for this reason alone. Nonetheless, in terms of its role as an arbovirus vector, evidence is lacking to incriminate Ae. albopictus as the vector of even a single case of human disease in the United States.