The black-legged tick, I. scapularis, is of major public health importance because it feeds indiscriminately on numerous vertebrate hosts, including humans, and transmits Borrelia burgdorferi, Babesia microti, and human granulocytotropic ehrlichia to humans. Rickettsiae have been detected in I. scapularis (3-8); however, the ability of black-legged ticks to serve as vectors of rickettsiae to humans or to other small mammals important in maintaining and spreading rickettsiae in nature has not been examined. Because rickettsiae are regularly detected by immunofluorescence staining in I. scapularis specimens sent to the Texas Department of Health (5,7) and because the range of I. scapularis and RMSF cases overlaps in Texas (9), we characterized the immunofluorescence-detected microbial agent in this tick collected from Anderson County in eastern Texas.

We examined the field-collected I. scapularis, preserved in alcohol, to determine species, sex, and stage of development. Midgut tissues were removed and smeared on two glass slides. One tissue smear was screened for rickettsiae by the Gimenez staining technique. The smear was further analyzed by using a fluorescein isothiocyanate–labeled rabbit antibody against R. rickettsii that cross-reacts with many other SFG rickettsiae (10).

DNA from the tick was extracted with phenol:chloroform (1:1) by the standard method (11) after proteinase K and sodium dodecyl sulfate digestion of homogenized tick tissue. The DNA was resuspended in 50 μl of sterile water.

Nucleotide and deduced amino acid sequences were aligned by using the PILEUP program (12). Phylogenetic analyses were conducted by using the PAUP parsimony algorithm (13), and the NEIGHBOR and FITCH distance matrix programs were implemented in the PHYLIP package (14). Parsimony analysis was implemented by using the heuristic algorithm and both ordered (transition:transversion = 3:1) and unordered characters. Because nucleotide sequences generally differed by less than 20%, distance methods used the Jukes-Cantor formula (15). Sequences were added at random with 10 replications. Bootstrap resampling with 200 replicates was used to place confidence values on groupings within trees. 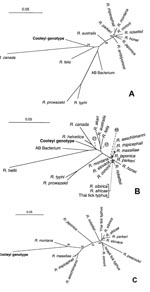 All three genes (17 kDa, gltA, and rompA) analyzed from this rickettsia had distinct sequences. Indeed, comparison of 17 kDa, gltA, and rompA partial nucleotide sequences showed at least 7.5%, 4.4%, and 12% differences, respectively, with the closest rickettsial species for each of the three genes analyzed. Both parsimony and distance phylogenetic methods indicated that the most closely related rickettsia was different at each of the three genes. However, bootstrap values for grouping the I. scapularis rickettsia with other rickettsiae were low, with the exception of its pairing with R. montana for the rompA gene (bootstrap value 99%, Figure 2C), perhaps because only relatively short partial sequences of the three genes were used for analysis. Otherwise, the three phylogenetic methods generally yielded trees with similar branching patterns; minor differences were observed within the SFG and in the position of the R. akari, R. australis, and R. felis groups for the gltA gene (Figure 2B). Figure 2A and B generally support the monophyletic nature of SFG. The few exceptions were the grouping of R. australis and R. akari with R. felis at the gltA gene (Figure 2B). This grouping of R. australis and R. akari with TG rickettsiae was supported by a bootstrap value of only 47%. In contrast, TG sequences never made up a monophyletic group when either gltA or 17 kDa sequences were analyzed by any of the phylogenetic methods. However, groupings placing TG sequences with sequences for other organisms such as R. bellii, AB Bacterium, or I. scapularis rickettsia were only weakly supported by bootstrap analyses.

When R. helvetica sequence information becomes available and is analyzed, it will be interesting to view the placement of the I. scapularis rickettsia and R. helvetica within the 17 kDa and rompA phylogeny. The closest rickettsial species at the 17 kDa, R. australis, and at the gltA gene, R. helvetica, are both Ixodes-associated rickettsiae. That a segment of the rompB was not amplified when the BG-12 primer pair was used is not surprising; the rompB segments of R. akari, R. bellii, R. helvetica, R. massiliae, and the I. scapularis rickettsia identified recently in Minnesota were also not amplified when this primer pair was used (8,18). Indeed, the highest sequence similarity of the gltA gene was with R. helvetica, which occurs in Swiss I. ricinus ticks (19).

Because I. scapularis readily feeds upon humans in the northeastern United States and occasionally in Texas, this rickettsia, genetically distinct from R. rickettsii, may cause an unrecognized rickettsiosis manifesting as a clinical disease different from the severe illness caused by R. rickettsii. In fact, I. scapularis has been associated epidemiologically with a fatal illness in Texas considered to be RMSF (5). Elliott and colleagues reported a fatal case of SFG rickettsiosis in a patient who jogged with a friend at a state park. Ticks collected at that site were only I. scapularis, some infected with an SFG rickettsia. An I. scapularis tick removed from the scalp of the patient's friend during an interview was later found to contain a rickettsia. In addition, rickettsiae of lower virulence may exist in Texas. A serologic study by Taylor and others suggested that 9% to 21% of sixth-grade students in Burleson and Mansfield Counties of Texas had prior immune stimulation by a rickettsial agent (7). None of the 32 children with serologic evidence of prior rickettsial infection had ever been treated for or diagnosed with RMSF. This study implies that these children were infected with a rickettsia of low virulence, or contrarily, that these children experienced asymptomatic immune stimulation with rickettsial antigens.

On the other hand, if not pathogenic for humans, the I. scapularis rickettsia could interfere with the transmission of R. rickettsii by other ticks to animals by inducing cross-protective immunity or by an interference mechanism such as that of R. peacockii (1,2). Noda et al. have proposed that a rickettsia found in laboratory-reared I. scapularis from Minnesota is an endosymbiont of the tick because the microorganism appears to be localized only to the ovaries (8). The potential pathogenicity of a rickettsia confined to the ovaries raises the question of whether or not it could escape from this intracellular niche to become infectious. Also, naturally occurring dual infections of rickettsiae in a tick have never been established. If this rickettsia is restricted to the ovaries, this tick may be precluded from serving as a vector of rickettsiosis under natural conditions. However, because the black-legged tick is a three-host tick, it may potentially serve as a vector of pathogenic rickettsiae to a wide range of susceptible hosts, including mammals, birds, and reptiles, from which other tick vectors could become infected after a rickettsemic blood meal. SFG rickettsiae have been detected in 10.2% to 16.7% of I. scapularis ticks in Texas (5,7), 5.6% in Connecticut (4), and 11.1% to 66.7% in South Carolina (3). While the numbers of ticks in these collections have been low, the prevalence of SFG rickettsiae in these ticks is among the highest recorded. Because rickettsiae have been regularly detected in unengorged black-legged ticks from different geographic locations (Texas, South Carolina, and Connecticut), we believe that I. scapularis is infected with SFG rickettsiae and that infection in these ticks likely represents more than ingestion in blood meals from rickettsemic animals.

Because for each of the three genes analyzed phylogenetically a robust relationship with other known Rickettsia species does not appear to exist, we believe that this rickettsia is genetically unique, and therefore, we provisionally designate this agent genotype Cooleyi after Dr. Robert A. Cooley, who served the Montana State Board of Entomology from 1899 to 1944. Isolation of this new rickettsial agent, characterization of its pathogenicity as the potential etiologic agent of an emerging infectious disease, and investigation of its role in its ecologic niche are subjects of interest for future study.

Adrian Billings is a Ph.D. candidate in the experimental pathology graduate program, University of Texas Medical Branch. His research interests include the epizootiology and pathogenesis of tick-borne zoonoses.

The authors thank Josie Ramirez and Kay Kantowski for their expert secretarial assistance. This research was supported by grants from the National Institutes of Health (AI 21242 and AI 31431-05A1).