A randomized cross-over clinical and endoscopic evaluation of 85 Ugandan patients showed that esophageal candidiasis in AIDS patients with oral candidiasis could be managed without endoscopy and biopsies. Oral lesions, especially when accompanied by esophageal symptoms, were sufficient for diagnosis. Miconazole was more effective than nystatin in treating esophageal candidiasis and could be a valid alternative to more expensive azolic drugs in developing countries.

Diagnosis of esophageal candidiasis is usually based on the endoscopic appearance of the typical mucosal lesions and on histopathologic studies (10-12). Several western studies have shown that the diagnosis of this disease in AIDS patients can be made on clinical findings alone because the positive predictive value of esophageal symptoms as indexes of esophageal infection is 71% to 100% (10,13,14). Such an evaluation has not yet been made in African AIDS patients.

Several therapeutic regimens have been effective in treating oral and esophageal candidiasis (8,15-23). For the past decade, oral nystatin therapy has been considered effective in controlling Candida esophagitis (11). In tropical countries, the efficacy of nystatin in treating this disease is not well known, although a recent study in Zaire reported a cure rate of less than 10% (24). We evaluated the diagnostic accuracy of esophageal symptoms in predicting Candida esophagitis in Ugandan AIDS patients with oral candidiasis and compared the effectiveness of miconazole and nystatin in treating oral and endoscopically proven esophageal candidiasis in these patients.

From September 1994 to December 1995, 320 consecutive AIDS patients were observed at the Gastroenterology Department of Hoima Hospital in Uganda. Among them, 85 (45 women, 40 men, mean age 27.1, standard deviation [SD] 5.3 years) fulfilled admission criteria: positive HIV test or clinical diagnosis of AIDS and presence of oral patchy white plaques as markers of oral candidiasis. The district medical officer and the hospital medical superintendent granted approval for the study, and informed consent was obtained from each patient. Patients were considered symptomatic if they had any of the following symptoms: odinophagia, dysphagia, or retrosternal burning pain.

All patients were hospitalized, and the upper digestive tract was examined endoscopically. The diagnosis of esophageal candidiasis was made at the examination. All patients had the same spectrum of lesions: patchy white plaques, confluent pseudomembrane, and friable mucosa. Routine histopathologic assessment was not performed, mainly because of cost.

Patients were randomly assigned to the nystatin or miconazole regimen; a stratified randomization method was used to balance treatment groups by esophageal symptoms, age, and sex (Table). Nystatin tablets were given at a dose of 1,000,000 I.U. every 8 hours for 7 days (according to Uganda Ministry of Health 1993 National Standard Treatment Guidelines), while miconazole tablets were administered at a dose of 250 mg every 6 hours for 7 days (25). At a mean follow-up of 7.6 days (SD 0.9), the patients' symptoms were reassessed, and the upper digestive tract was reexamined endoscopically. The endoscopist was blind to the treatment used. Patients given nystatin who still had candidiasis were placed on the miconazole regimen and tested for candidiasis 1 week later. 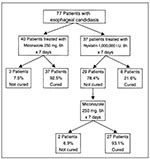 Although our study was not designed to detect recurrence of candidiasis, esophageal candidiasis is likely to recur in AIDS patients within 12 months from any antifungal treatment; if it does, response to therapy is worse than response to initial therapy (28). For this reason, as well as the possibility of resistance to miconazole (sporadic cases have been reported [29]), more expensive azolic drugs (e.g., fluconazole) should be reserved for recurrences of the disease; the disease should be treated initially with less expensive, but more effective drugs (e.g., miconazole).

In sum, AIDS patients with oral candidiasis in countries similar to Uganda can be managed without endoscopic and bioptic assessments since oral lesions are typical and a high prevalence of esophageal involvement is expected (with or without symptoms) (>90% of cases in our study). In our patients, nystatin had a very low cure rate in the treatment of esophageal candidiasis in AIDS patients; however, it could still play a role in the treatment of oral candidiasis, especially in nonimmunocompromised patients, in whom concomitant esophageal involvement is less common. On the other hand, miconazole, a medium-priced azolic drug, was very effective and could be a valid alternative to more expensive azolic drugs in developing countries.

Dr. Ravera is a specialist in gastroenterology and digestive endoscopy. A researcher at the Italian National Health Institute, he serves as site coordinator/monitor of the UNAIDS PETRA study at Nsambya Hospital, Kampala, Uganda. His research interests include gastroenterology, endoscopy, infectious diseases, and HIV/AIDS.

We thank Dr. G. Oundo, medical superintendent, and the staff of Hoima Hospital.