In recent years, human cyclosporiasis has emerged as an important infection, with large outbreaks in the United States and Canada. Understanding the biology and epidemiology of Cyclospora has been difficult and slow and has been complicated by not knowing the pathogen's origins, animal reservoirs (if any), and relationship to other coccidian parasites. This report provides morphologic and molecular characterization of three parasites isolated from primates and names each isolate: Cyclospora cercopitheci sp.n. for a species recovered from green monkeys, C. colobi sp.n. for a parasite from colobus monkeys, and C. papionis sp.n. for a species infecting baboons. These species, plus C. cayetanensis, which infects humans, increase to four the recognized species of Cyclospora infecting primates. These four species group homogeneously as a single branch intermediate between avian and mammalian Eimeria. Results of our analysis contribute toward clarification of the taxonomic position of Cyclospora and its relationship to other coccidian parasites.

Cyclospora cayetanensis, a coccidian parasite recently described as a human pathogen causing prolonged watery diarrhea (1), has been identified as the cause of large, multistate outbreaks of diarrhea in the United States associated with imported produce, most notably raspberries (2,3). Molecular phylogenetic analysis showed that Cyclospora is closely related to Eimeria species (4), especially to mammalian Eimeria species (5). The parasite has been reported from many geographic regions but seems to be endemic in tropical countries. Recent foodborne outbreaks in the United States and Canada have generated considerable scientific interest and numerous questions about this organism; one of the most perplexing has to do with the possible role of other animals in harboring the infection and serving as a source of contamination.

In 1996, Smith and colleagues reported the presence of C. cayetanensis-like oocysts in the feces of 37 of 37 baboons and 1 of 15 chimpanzees examined from the Gombe National Park, Tanzania. Other reports have documented C. cayetanensis-like oocysts in fecal samples from chickens in Mexico (6), a duck in Peru (7), and dogs in Brazil (8). However, only the Smith report (9) suggests a true natural host.

During spring 1997, we collected stool samples from free-ranging baboons (Papio anubis) and colobus monkeys (Colobus guereza) in Wollega Province in western Ethiopia. A high percentage of samples were positive for Cyclospora oocysts, but the organism, including sporulated oocysts, could not be completely described because the samples were fixed in formalin. In spring 1998, we returned to Wollega Province, collected additional stool samples from three species of primates (baboons, colobus, and African green monkeys [Cercopithecus aethiops]), and placed these samples in potassium dichromate for subsequent biologic and molecular studies. This report describes the results of those collections, provides molecular phylogenetic analysis, and names the newly identified parasites.

We collected stool samples from troops of baboons and green monkeys by following them as they foraged and from colobus monkeys by quietly waiting under trees in which monkeys were sitting. Only fresh stool samples were collected, and in neither situation was it possible to determine the age or sex of the animal that produced the sample. On several occasions, samples from more than one animal of the same species were pooled; these are referred to as composite samples.

In the collections from 1997, each stool sample was placed directly in 10% formalin. In the collections from 1998, all stool samples were suspended in water and allowed to settle. The sediment was sieved and resuspended in clean water. The resulting sediment was mixed with a 2.5% aqueous (w/v) potassium dichromate (K2Cr2O7) solution in a 3:1 ratio and allowed to settle. The supernatant was discarded, and fresh potassium dichromate solution was added in a 3:1 ratio. The potassium dichromate-stool mixture was kept at room temperature in 50-ml conical centrifuge tubes and returned to Atlanta.

The C. cayetanensis oocysts used in comparative studies were collected from stools from a 1997 Florida outbreak linked to consumption of Guatemalan raspberries and from stools collected in Leogane, Haiti.

DNA was extracted from 500-µl aliquots of stool samples, following the protocol of da Silva et al. (10). Extracted DNA was stored at 4°C until polymerase chain reaction (PCR) amplification was performed on the small subunit ribosomal RNA (SSU-rRNA) coding region of the genome. Both strands of PCR products were sequenced directly by using an automated DNA sequencer. We used a nested PCR protocol with primers CYCF1E and CYCR2B for the first step of the amplification and primers CYCF3E and CYCR4B for the second (11).

Sequencing of the SSU-rRNA Coding Region and Phylogenetic Analysis

SSU-rRNA sequences obtained for two baboon isolates were identical. The colobus and baboon Cyclospora isolates were assigned GenBank accession numbers AF111186 and AF111187, respectively. Sequencing of SSU-rRNA coding region of C. cercopitheci from a single African green monkey specimen showed a heterozygotic position, T/A at position #280. This may reflect mixed infection with two closely related isolates or may represent polymorphism among several copies of this gene in a single isolate. Thus, both green monkey SSU-rRNA sequences were submitted separately to GenBank and were assigned accession numbers AF111184 for the green monkey Cyclospora sequence #1 and AF111185 for sequence #2 (Table). 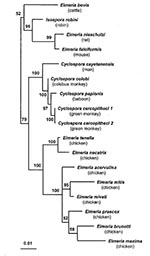 The phylogenetic trees generated by the PUZZLE and PAUP programs displayed similar topologic features and demonstrated that on the basis of the SSU-rRNA the Cyclospora isolates from monkeys are distinct from each other and from C. cayetanensis of humans (Figure). The sequence identities between the human isolate with the baboon, colobus monkey, and green monkey isolates 1 and 2 were 98.6%, 98.7%, and 98.4%, respectively. The phylogenetic relationship observed between Cyclospora and Eimeria species confirmed previous findings (4,5) with three distinct clades: avian Eimeria, mammalian Eimeria, and Cyclospora.

The genus Cyclospora was formed by Schneider in 1881 for organisms recovered from myriapods (terrestrial arthropods in the subphylum Mandibulata, Class Diplopoda [millipedes] and Class Chilopoda [centipedes]). Most knowledge about the genus Cyclospora is based on recently recognized species described from insectivores (moles) (12), heteromyid rodents in the southwestern United States (13), and humans (1).

In 1994, Ortega and colleagues described C. cayetanensis from human fecal material in Peru. In 1997, they described the parasite's intracellular life cycle in the duodenum and jejunum (14). C. cayetanensis differs significantly from all other described species not only in its host but also in its oocyst stage, which is much smaller and spherical rather than oblong. The recovery from nonhuman primates of other species of Cyclospora that produce small, spherical oocysts seems to suggest two distinct groupings: species that infect insectivores and rodents and produce large, oblong oocysts and those that infect primates (including humans) and produce small, spherical oocysts.

The geographic and host range for C. papionis, C. colobi, and C. cercopitheci needs to be defined. These primate species of Cyclospora are easily distinguished at the molecular level, but not at the light-microscope level. That C. papionis, C. colobi, and C. cercopitheci are species distinct from each other and from C. cayetanensis of humans is well substantiated, considering the molecular phylogeny based on the SSU-rRNA sequence data. This assumes that the differences in SSU-RNA reflect distinct species. For the time being, this method is probably the best for defining morphologically similar species. The separation of these parasite species is further supported by the distinct separation of the primate species on biologic grounds. Baboons are omnivorous, spend most of their time on the ground foraging for food, and have relatively large home ranges. Green monkeys spend a greater amount of time in trees but do forage on the ground. The canopy-dwelling colobus monkeys, on the other hand, have the smallest home range and are strict herbivores, predominantly eating leaves of certain trees.

The Cyclospora observed in baboons from Tanzania (9) is likely the same species as C. papionis from Ethiopia. A high percentage of baboons in the Gombe Stream Preserve are infected with a Cyclospora species indistinguishable from C. papionis (pers. obs.; Whittier, pers. comm.). Moreover, three sequences from Gombe baboon isolates submitted recently to GenBank (15) show only one base change from our sequence with each isolate (C to T at #1360 with sequences AF065566 and AF065567; C to T at #184 with AF065568), if unresolved base positions in their sequences are disregarded (three positions in AF065566 and AF065567 and six positions in AF065568).

The topology of the tree (Figure 1) displays the distinct Cyclospora species as a monophyletic branch with phylogenetic proximity to the genus Eimeria. The proximity between these coccidian genera has been demonstrated (4,5); we included in the tree an additional SSU-rRNA sequence of E. falciformis, a parasite of mice. The addition of this species clarified the resolution of the tree into three distinct clades: mammalian Eimeria, avian Eimeria, and Cyclospora. With the addition of molecular data for more species, especially the species of Cyclospora described from mammals other than primates, it may be reasonable to consider reclassifying the Cyclospora of primates (including humans) and either the bird or mammalian Eimeria to a new genus. However, morphologic and molecular taxonomists continue to struggle with the relationships within the coccidia. Morphologic criteria for naming the genera have provided a stable basis for many years. On the other hand, molecular data, based on the genetic information of these same organisms, suggest affiliations that do not always coincide with the existing associations based on morphologic features. Sterling and Ortega (16) suggest that small subunit rRNA sequences of Isospora should be compared with those of Cyclospora to help clarify taxonomic issues. They also point out the role of molecular taxonomy in establishing the validity of species and taxonomic groupings. Carreno and Barta (17) provided sequencing data for several species of Isospora and demonstrated the phylogenetic separation of various clades of Isospora, both with and without Stieda bodies. They propose separating mammalian species with Stieda bodies into the family Eimeriidae and retaining those without Stieda bodies in the family Sarcocystidae. We included sequences of I. robini in our analysis, and Cyclospora remains as a clearly separate grouping.

On the basis of the topology of the tree and the distance values obtained, the simian isolates are more closely related to each other than to C. cayetanensis of humans. This undoubtedly reflects host differences as well as other biologic features of each species. However, further molecular studies are needed to demonstrate whether these Cyclospora species described from lower primates occur in humans, or conversely, whether C. cayetanensis can occur in monkeys. At least in East Africa, researchers should continue to evaluate material collected from humans and nonhuman primates with care. We are continuing our efforts to determine whether other primate species are infected with these or distinct species of Cyclospora. Studies of human isolates of C. cayetanensis from different geographic regions have, thus far, not demonstrated any molecular differences. This further substantiates the taxonomic significance of the molecular differences detected between the Cyclospora from humans and lower primates.

Additional information is provided in Appendix 1 and Appendix 2.

Dr. Eberhard is head of the Biology and Diagnostics Branch, Division of Parasitic Diseases, National Center for Infectious Diseases, CDC. Trained in classical parasitology, he has broad interests in the diagnosis and biology of parasitic infections. His research interests include the identification of unusual parasites and zoonotic infections.

The authors thank Oleg Ditrich for providing useful hints on the Latin grammar usage and Robert Hobbs, Jr., for the computer images of the oocyst composite drawings of each species.