"Pray before surgery, but remember God will not alter a faulty incision."  Arthur H. Keeney

The 21st century advancements in genetics, nanotechnology (mechanical engineering on a molecular scale), and robotics could revolutionize medical therapy and diagnostics. I will review current and future directions of minimally invasive surgery, with an emphasis on cardiac surgery, and surgical site infections after minimally invasive valve procedures.

Since the first endoscopic cholecystectomy was performed in France in 1988, minimally invasive surgical techniques have dramatically affected many surgical subspecialties, driven by advances in port access and video instrumentation and the desire to lessen incision pain and length of hospital stay. Advances in laparoscopic kidney and adrenal surgery now include 2-mm needle optics and instruments, which have resulted in decreased postoperative illness and superior cosmetic results (1). The challenge is to evaluate the safety and efficacy of these new techniques as they are widely introduced in the United States.

Minimally invasive cardiac surgery was predated by innovations in general surgery and is increasingly applied to cardiac procedures (30,000 worldwide in 1998). Coronary artery bypass grafting (CABG) through a median sternotomy incision with cardiopulmonary bypass support remains standard because it provides the surgeon with good exposure, a bloodless and motionless field, and myocardial protection, with graft patency rates of 90% at 10 years (2). However, cardiopulmonary bypass support may have adverse physiologic consequences, including a 6% incidence of central nervous system events (3).

Coronary artery anastomosis on a beating heart was first described by Kosselov in 1967 and has been modified with the MIDCAB technique to an 8-cm right or left anterior thoracotomy incision that allows direct visualization of the beating heart through small incisions. The primary candidate for this procedure is a patient with single anterior vessel disease; an estimated 1 of 3 coronary revascularization procedures (CABG or percutaneous coronary artery angioplasty) meet this criterion. The technical constraints of the MIDCAB procedure include a moving surgical field and a turgid heart on which to perform grafting. Stabilizers to control heart movement are used to facilitate anastomosis of the target grafts during suturing.

The port-access operation involves a mini-thoracotomy (8 cm) on an arrested heart by using percutaneously inserted endovascular occluder balloons in the ascending aorta. Unlike port-access surgery in noncardiac surgical subspecialties, almost all cardiac operations on adult patients are reconstructions that are technically more demanding when performed through an endoscope. In addition, the laparoscopic approach with an insufflated peritoneum provides better exposure than open techniques (5).

An important quality indicator for minimally invasive surgical procedures is the conversion rate to open procedures. A surgeon's decision to convert from a minimally invasive procedure to an open procedure may be determined by poorly defined anatomy or surgical complications. Conversion is not necessarily a failure but may be used as a quality indicator, and conversion rates for minimally invasive cardiac surgery procedures have declined substantially with increasing experience at our institution (Figure 2). The introduction of any new surgical technique involves a learning curve, and increased experience may be translated into reduced illness and death. Examples of the relationship between surgeon-specific volume and death associated with CABG procedures have been published (6–8).

The association of outcome with case volume may not depend on a single person but on the collective abilities of the clinical team (9). High volumes may also reflect selection bias by patient referrals to institutions and surgeons with good outcomes. Health-care consumers are increasingly interested in outcome measurements, and one consumer advocate group (the Center for Medical Consumers) has compiled 1998 data from the New York State Department of Health for 21 surgical procedures, stratified by volume, hospital, and individual practitioner (available at URL www.medicalconsumers.org).

The greatest challenge facing solid organ transplantation in the United States is a shortage of donors, with approximately three persons awaiting transplantation for every organ donated. Organs from pigs may alleviate the shortage, but the challenge of xenotransplantation is in replacing xenogenic epitopes (antigens) recognized as foreign by the immune system. An additional concern is trans-species transmission of endogenous retroviruses from donor animals, such as porcine endogenous retrovirus (PoERV). Two cases of successful extracorporeal hepatic support with transgenic pig livers have been reported with no evidence of human PoERV infection at 5 and 185 months of follow-up (10). 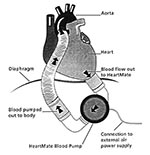 Future Directions: From Blood and Guts to Bits and Bytes

Technologic advances are continually being brought into the operating room with increasing use of robotics and teleoperating systems and virtual environment, which is the fusion of robotics and three-dimensional imaging technology. One issue with laparoscopic surgery is control of the camera (laparoscopic lens) while the surgeon operates. There may be problems with second guessing where the surgeon wants the camera lens directed; movement of the camera lens, leading to iatrogenic complications; and the expense of additional personnel. Voice activation of a surgical robotic assistant has permitted single-surgeon thorascopic surgery (14). The surgeon registers voice commands into a voice card, and the thorascope is connected with a robotic arm. In a study of human-assisted versus robotic-assisted surgeries, all procedures were successfully completed with no difference in operating times and no technical mishaps related to the robot.

Teleoperating systems and telesurgery allow the operator to perform surgery from a remote site. A three-dimensional camera is outfitted with tactile, auditory, and proprioceptive feedback. This technology may provide a means to treat patients in hazardous or distant environments where evacuation is not feasible. NASA is planning to send astronauts on a 3-year mission to Mars by 2020 and believes an acute medical crisis is likely during such a voyage. Biomedical space researchers are reviewing the creation of a digitized virtual astronaut, a computerized representation of the entire physiology, updated in real time by input from a comprehensive bank of sensors (Groopman J. Medicine on Mars. New Yorker, February 14, 2000). Any necessary surgery would be performed by the flight surgeon, coached by the virtual mentor and aided by robotics.

In summary, the operating room remains a dynamic environment undergoing rapid change and innovation. The challenge for infection control practitioners is to adopt a facilitative (not passive or resistant) involvement in measurement and data-tracking instruments (e.g., registries, conversion rates, surgical site infection rates) and embrace opportunities for comparison.

Page created: May 10, 2011
Page updated: May 10, 2011
Page reviewed: May 10, 2011
The conclusions, findings, and opinions expressed by authors contributing to this journal do not necessarily reflect the official position of the U.S. Department of Health and Human Services, the Public Health Service, the Centers for Disease Control and Prevention, or the authors' affiliated institutions. Use of trade names is for identification only and does not imply endorsement by any of the groups named above.