State of the Art

Subtyping methicillin-resistant Staphylococcus aureus (MRSA) isolates and tracking nosocomial infections have evolved from phenotypic to genotypic approaches; most laboratories now depend on pulsed-field gel electrophoresis (PFGE). We discuss the limitations of current image-based genotyping methods, including PFGE, and the advantages (including ease of entering data into a database) of using DNA sequence analysis to control MRSA infections in health-care facilities.

Staphylococcus aureus is a major nosocomial pathogen that causes a range of diseases, including endocarditis, osteomyelitis, pneumonia, toxic-shock syndrome, food poisoning, carbuncles, and boils. In the early 1950s, acquisition and spread of beta-lactamase-producing plasmids thwarted the effectiveness of penicillin for treating S. aureus infections. In 1959, methicillin, a synthetic penicillin, was introduced. However, by 1960, methicillin-resistant S. aureus strains were identified, the direct result of S. aureus's acquiring the mecA gene, which encodes for an altered penicillin-binding protein gene (PBP2a) (1).

By the early 1960s, European hospitals were reporting outbreaks of MRSA infections, and subsequently MRSA clones spread to health-care institutions around the world (2). In the United States, MRSA is responsible for approximately 25% of nosocomial infections, and reports of community-acquired MRSA infections are increasing (3). The multidrug-resistant phenotype of MRSA strains and their intrinsic beta-lactam resistance make them difficult and costly to treat (4,5). In some medical institutions in New York City, MRSA accounts for approximately 29% of nosocomial infections and 50% of associated deaths (5). Controlling MRSA remains a primary focus of most hospital infection control programs (6).

Understanding genetic relatedness becomes more challenging when the strain study population is larger, separated further in time, and recovered from a larger geographic area. The long-term or global epidemiologic question is whether the strains causing disease in one geographic area are related to those causing disease in other regions. A combination of genotyping methods has been used to study global S. aureus transmission (8,9).

In addition to tracking outbreaks, genotyping is used to distinguish between contaminating and infecting isolates and between separate episodes of infection and relapse of disease (10). Genotyping is also able to link certain S. aureus clonal types and disease syndromes, such as in cases of food poisoning and toxic-shock syndrome. The present challenge is to continue to build bacterial databases linking genetic markers and clinical presentations so that important correlates of disease can be identified.

Numerous techniques are available to differentiate S. aureus, and specifically MRSA, isolates. Historically, isolates were distinguished by phenotypic methods, including antibiotic susceptibility testing and bacteriophage typing. Both methods have limitations, as genetically unrelated isolates commonly have the same antibiogram, and many S. aureus isolates are nontypeable by phage typing (7).

With the advent of molecular biology, strain typing focused on DNA-based methods. Initial techniques compared restriction endonuclease patterns of chromosomal or plasmid DNA. The second generation of genotyping methods included Southern blot hybridization using gene-specific probes, ribotyping, polymerase chain reaction (PCR)-based approaches, and pulsed-field gel electrophoresis (PFGE) (10,11). These methods require subjective interpretation and comparison of patterns and fingerprint images. The ability to digitize and store images and to compare patterns by using matching software programs has enhanced these methods. However, they still remain difficult to standardize between laboratories, and the image-based information is difficult to organize for rapid search and retrieval by computer. In addition, image-based methods do not provide biological criteria to evaluate the relatedness between different strains (12).

Binary typing is a more objective genotyping method that compares the presence or absence of 12 different targets in the S. aureus genome. The binary coding system for each probe creates a numerical type amenable to relational databases (13). However, binary typing fails to provide information on genetic relatedness between strain types. This method is also technically subjective, as it requires interpretation of a positive hybridization signal from background.

DNA sequence analysis is an objective genotyping method; the genetic code (A-T-C-G) is highly portable and easily stored and analyzed in a relational database. Recent advances in DNA sequencing technology, including rapid, affordable, high-throughput systems, have made it possible for sequencing to be considered as a viable typing method.

MLST has been developed for Neisseria gonorrhoeae, Streptococcus pneumoniae, and S. aureus, based on the classic multilocus enzyme electrophoresis (MLEE) method used to study the genetic variability of a species. Sequence analysis of five to seven housekeeping genes provides a datasbase from which to infer relationships in somewhat distantly related isolates that have had substantial time to diversify (14,15).

The MLST approach is too labor-intensive, time-consuming, and costly to use in a clinical setting. More than 2,500 bp must be compared for each isolate. In addition, for certain recent subpopulations, such as MRSA, genetic variability in the housekeeping targets will likely be limited and discrimination will be restricted. However, a single-locus target, if discriminating, provides an inexpensive, rapid, objective, and portable genotyping method to subspeciate bacteria. Using a single target depends on finding a region for sequencing that is sufficiently polymorphic to provide useful strain resolution. Loci with short sequence repeat (SSR) regions may have suitable variability for discriminating outbreaks (16). Two S. aureus genes conserved within the species, protein A (spa) and coagulase (coa), have variable SSR regions constructed from closely related 24- and 81-bp tandem repeat units, respectively. In both genes, the in-frame SSR units are degenerative, variable in number, and variable in the order in which repeat units are organized. The genetic alterations in SSR regions include both point mutations and intragenic recombination that arise by slipped-strand mispairing during chromosomal replication and that result in a high degree of polymorphism (17,18).

Frenay et al. (19) compared the SSR region in the protein A gene in a collection of MRSA isolates studied by classical bacteriophage typing and showed that spa-typing clustered isolates previously grouped to phage type III-29. However, van Belkum et al. questioned whether the repeat region was too hypervariable and thus not a sound target for epidemiologic studies (20).

The spa-type database of the Public Health Research Institute Tuberculosis Center includes >950 clinical S. aureus isolates; most (~80%) are methicillin resistant. DNA sequence analysis identified 37 unique, 24-bp SSR types; one type was 1 codon longer. The number and organization of the repeat types define the S. aureus spa type; to date, 186 spa types have been identified and catalogued in a relational database.

To further evaluate the clinical and epidemiologic validity of the protein A repeat region as a genotyping tool, we analyzed two historic collections previously characterized by multiple genetic methods. The Centers for Disease Control and Prevention's (CDC) collection of 59 staphylococci included 58 S. aureus isolates, 37 of them methicillin resistant; 29 isolates had been previously grouped into four identifiable clusters based on sound epidemiologic links. These isolates have been repeatedly studied with an array of techniques (e.g., phage typing, antibiograms, PFGE, ribotyping; Table 1). In the CDC collection, 22 SSR regions and 13 different spa types were identified. spa-typing correctly classified 27 of the 29 outbreak cultures and incorrectly grouped four isolates to these clusters. Overall, spa-typing produced results better than the mean score of 25 correct classifications and 5 misclassifications (18). These results support the findings of Frenay et al. (19) that spa-typing has the stability to correctly group epidemiologically related strains.

The second collection we analyzed consisted of 261 MRSA isolates from 12 New York City hospitals historically catalogued by Southern blot hybridization using mecA and Tn554 and by PFGE. Together, these two methods identified 39 genotypes, which were further categorized into 96 PFGE subtypes. Five major MRSA clonal types were identified, and the predominant mecA:Tn554:PFGE genotype (I:A:A) was found at each of the 12 hospitals. Of the 261 MRSA isolates, 107 were typed as I:A:A. Twenty-two similar PFGE patterns were grouped to the "A" type (12). We named this genotype pattern, which has been routinely identified as the predominant MRSA clone in the United States, the "North American" MRSA clone (unpub. data). spa-typing correctly identified the five major MRSA clonal groups and also categorized 98 of the 107 I:A:A MRSA isolates as spa type 2; the remaining 9 isolates were distributed in five different spa types, which were grouped by repeat composition and repeat organization (Table 2).

To test the genetic validity of spa-typing, we sequenced the SSR region of the coagulase gene. The slower "clock-speed" of the larger coagulase repeat region provided an independent genetic target to compare evolutionary relatedness with the results provided by spa-typing. Sequence analysis revealed a common coa type among seven of the nine spa types (Table 2), providing additional, independent evidence of genetic relatedness of the I:A:A MRSA isolates. 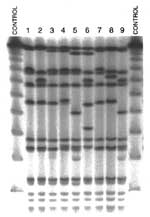 The PFGE fingerprint patterns in the North American MRSA clonal types listed in Table 2 were determined (Figure). The isolates with spa types 14, 25, and 28 (lanes 5, 9, and 6, respectively) were grouped to the North American clonal type on the basis of spa composition and organization and coa type. However, these isolates were initially distinguished by different mecA:Tn554 genotypes and more diverse PFGE patterns.

The finding that spa-typing could genotype the S. aureus isolates from two different collections in congruence with established procedures disproves the belief that this repeat region is too unstable for epidemiologic studies. While spa-typing does not have the resolving power of PFGE subtyping, it is fast, easy to use and interpret, and compatible for building relational databases. Most importantly, DNA sequence analysis of the protein A repeat region provides an unambiguous, portable dataset that simplifies information sharing between laboratories and facilitates creating a large-scale database for studying global and local epidemiology.

The MLST database of S. aureus should establish a sound genetic framework to describe the species (14). These data are portable and can be easily linked to a spa and coa database, a process that takes advantage of the objective nature of sequence information. The spa-short repeat region and its variation in both composition and organization have established a library of distinguishable patterns that allows isolates to be easily and accurately genotyped. These groupings are supported by other image-based genotyping methods and sequencing secondary targets such as the coagulase short sequence repeats (17).

Although still limited in number, isolates that have been genotyped on the basis of mecA:Tn554:PFGE fingerprint patterns and spa- and coa-typing provide a rich database to study the recent spread of S. aureus and MRSA clones. These data provide sound evidence that SmaI-PFGE patterns change at a faster clock-speed than do the protein A SSRs and that the coagulase repeats change at a slower clock-speed than the shorter protein A repeats.

In short, sequence typing permits the widespread use of a proactive approach to investigate suspected outbreaks of MRSA.

Dr. Kreiswirth is the founding director of the Public Health Research Institute Tuberculosis Center in New York City. The center was established in January 1992 in response to the reemergence of TB in New York. The focus of the laboratory centers on the molecular epidemiology of TB and nosocomial infections; research aims include identifying and developing genotyping targets to improve infection control and public health.

Page created: April 17, 2012
Page updated: April 17, 2012
Page reviewed: April 17, 2012
The conclusions, findings, and opinions expressed by authors contributing to this journal do not necessarily reflect the official position of the U.S. Department of Health and Human Services, the Public Health Service, the Centers for Disease Control and Prevention, or the authors' affiliated institutions. Use of trade names is for identification only and does not imply endorsement by any of the groups named above.