A Cultured Strain of "Helicobacter heilmannii," a Human Gastric Pathogen, Identified as H. bizzozeronii: Evidence for Zoonotic Potential of Helicobacter

We compared the characteristics of a cultured human "Helicobacter heilmannii" isolate with those of other helicobacters found in animals. Phenotypic, protein profile, 16S rDNA sequence, and DNA-DNA hybridization analyses identified the human strain as H. bizzozeronii, a species frequently found in dogs. Thus, H. bizzozeronii may have zoonotic potential.

The importance of Helicobacter pylori in human gastric disease is well recognized (1). After its initial isolation, a distinctive, tightly coiled organism was also observed in some human gastritis cases (2). Although these organisms could not be isolated in vitro (3,4), they were designated as "Gastrospirillum hominis" on the basis of morphology and ecologic niche (4), and later as "H. heilmannii" on the basis of 16S rRNA gene sequence analysis. Differences in 16S rRNA gene sequences have allowed two types to be defined for "H. heilmannii," which accounts for 0.2% to 4% of human gastritis cases (5). Evidence suggests that infections with this organism may be more frequently associated with mucosa-associated lymphoid tissue lymphomas (6).

Animals, especially cats, dogs, and pigs, are frequently infected with large spiral organisms (often referred to collectively as gastrospirilla) that closely resemble "H. heilmannii" strains in humans (3,7-10). As a consequence, the possibility of zoonotic infection has been considered (3,10,11). Three distinct species resembling "H. heilmannii" have been isolated from cats or dogs, namely H. felis, H. bizzozeronii, and H. salomonis (10). The provisional name "Candidatus H. suis" has been proposed for the pig organism (8). However, critical comparison of strains from each of these sources has not been possible because few workers have obtained cultures of human strains. To our knowledge, only one "H. heilmannii" strain has been cultured from human tissue (6).

We present the results of a polyphasic identification analysis that confirms this human "H. heilmannii" isolate as H. bizzozeronii, and we discuss the public health implications of this finding.

The human "H. heilmannii" isolate, Rigshospitalet 53 (R-53), and other Helicobacter strains for comparison were cultured by using conditions described earlier for phenotypic (12), whole-cell protein (13), 16S rRNA sequence (12), and DNA-DNA hybridization (10) analyses. A total of 66 phenotypic tests were determined for R-53, and results were compared both empirically and by numerical analysis with similar data for 116 other strains of Helicobacter, as described (12). Primers and methods used for polymerase chain reaction (PCR) amplification and direct sequencing of the full 16S rRNA gene were as described previously, as were the methods used for sequence alignment and phylogenetic analysis (14). The whole genomic DNA was isolated and dot-blot DNA-DNA hybridizations were performed (10), with DNA derived from R-53 used as a probe to characterize the type strains of H. felis, H. bizzozeronii, and H. salomonis. Whole-cell protein samples were prepared, separated by polyacrylamide gel electrophoresis (running length 9 cm), digitized, and subjected to comparative numerical analysis (13).

The phenotypic characteristics of R-53 were consistent with those documented for H. felis, H. bizzozeronii, and H. salomonis (10), with two principal differences: the cultures formed distinct colonies, and the growth exhibited was profuse with a greasy surface film. This morphology is typical of H. pylori (1) but differs from the sparse growth lacking defined colony formation observed in cultures of the other Helicobacter species mentioned (10). Furthermore, R-53 grew weakly on 1.0% and 1.5% ox-bile media. This trait is rare among gastric helicobacters but more common in species colonizing the lower intestine (15). Nonetheless, numerical comparison of phenotypic characters demonstrated that R-53 was most similar (90.9%) to a reference strain (Wiberg) of H. bizzozeronii. These two strains formed part of a larger cluster delineated at the 87% similarity level containing all 12 H. bizzozeronii and six H. salomonis isolates studied, as well as 12 of 15 H. felis and an H. muridarum strain (a mouse isolate). This cluster was clearly differentiated from all other Helicobacter species, including 14 type and reference strains of H. pylori obtained from humans, monkeys, and a pig (data not shown).

A phylogenetic tree based on comparisons of 16S rRNA gene sequences confirmed previous observations (6) that R-53, H. felis, H. bizzozeronii, H. salomonis, and "H. heilmannii" type 2 were highly related and formed a distinct cluster within the rRNA homology group III (i.e., the Helicobacter phylogenetic branch) of rRNA superfamily VI (data not shown). Although the infra- and intraspecific sequence variation observed among these species makes unequivocal differentiation between them impossible, these species are readily distinguished from other helicobacters, including the "H. heilmannii" type 1 taxon. The closest phylogenetic neighbor of the latter is "Candidatus H. suis" (8), which may be found in up to 87% of pigs (7). The complex relationships observed within the "H. heilmannii" type 2-containing clade exemplify cases in which 16S rDNA sequence comparisons cannot be used as an accurate species identification method, as also seen with the related taxa H. cinaedi (16) and C. hyointestinalis (14). 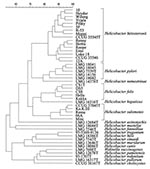 Figure 1. Dendrogram expressing similarity in whole-cell protein patterns of strain R-53, and type and reference strains of all Helicobacter and Wolinella species.

Numerical comparison of protein profiles of R-53 with those of all extant Helicobacter species placed this strain in a cluster with type and reference strains of H. bizzozeronii (Figure 1). This clustering confirms the earlier finding that species identification of cultured Helicobacter strains is efficiently performed with highly standardized whole-cell protein analysis, and the results are in excellent agreement with those of DNA-DNA hybridization (10,13,16). Dot-blot DNA-DNA hybridization demonstrated that the R-53 probe did not hybridize intensively with genomic DNA of either H. felis or H. salomonis, but hybridized strongly with DNA from all isolates of H. bizzozeronii, including homologous assays (Figure 2). Therefore, compilation of the phenotypic and genotypic data determined for R-53 clearly identify it as a strain of H. bizzozeronii, the most common Helicobacter species (approximately 44% of isolates) found in healthy and diseased pet dogs (10).

Although further studies are needed to clarify the taxonomic relationships between "H. heilmannii" type 1, "Candidatus H. suis," and members of the H. felis-bizzozeronii-salomonis species complex, available data strongly indicate that human infections with gastrospirilla may be acquired from more than one source, including pigs, dogs, and cats. Several epidemiologic studies have shown an increased incidence of "H. heilmannii" in humans associated with animal contacts and these bacteria (11,17). PCR-restriction fragment-length polymorphism (RFLP) analysis of the Helicobacter ureB gene performed directly on stomach biopsy tissue showed the presence of multiple types of gastrospirilla in a single patient; the same PCR-RFLP type was also identified in the patient's cat (F3). In conclusion, this study clearly demonstrates the zoonotic potential of large, spiral gastric Helicobacter spp. The only human "H. heilmannii" isolate to date was identified in a polyphasic taxonomic analysis as H. bizzozeronii. More studies with a number of isolates are needed to evaluate the full zoonotic potential of animal Helicobacter spp. Given the difficulties in culturing these organisms in vitro, available data strongly indicate the need for species-specific PCR assays for detecting the various Helicobacter spp. that inhabit the gastric mucosa of humans and animals.

Dr. Jalava, whose research interests focus on the taxonomy of animal helicobacters, works in the National Public Health Institute of Finland. This study was carried out in the Department of Food and Environmental Hygiene of the University of Helsinki.

We thank Urszula Hirvi and Dirk Dewettinck for excellent technical assistance. We are grateful to all the depositors of the strains.

Katri Jalava has been supported by the Young Scientists Award of Emil Aaltosen Säätiö.

A Cultured Strain of "Helicobacter heilmannii," a Human Gastric Pathogen, Identified as H. bizzozeronii: Evidence for Zoonotic Potential of Helicobacter