During the recent outbreak of bioterrorism-associated anthrax in the United States, 11 patients were diagnosed with inhalational anthrax and 7 with cutaneous anthrax (Table 1 and 2) (1–6). During the extensive epidemiologic investigation, >125,000 clinical and environmental specimens were collected and analyzed for Bacillus anthracis, the causative agent of anthrax. We used the Laboratory Response Network (LRN) polymerase chain reaction (PCR) assay (real-time PCR assay) during the anthrax outbreak to detect B. anthracis DNA in environmental samples and clinical specimens. This assay provided 100% sensitivity and specificity when evaluated and validated on our panel of diverse bacterial isolates. On clinical specimens, this assay was one of three used to confirm anthrax cases when isolation of B. anthracis failed after antimicrobial drug treatment was initiated. In these culture-negative cases, laboratory confirmation was based on at least two supportive laboratory tests including this PCR, immunohistochemical stain (IHC), or anti-protective antigen (PA) titer (immunoglobulin [Ig]G enzyme-linked immunosorbent assay [ELISA]). PCR assays have not been previously used in an outbreak setting to detect B. anthracis directly in clinical specimens in a real-time manner. We evaluated the use of this assay on the clinical specimens and environmental samples received during the outbreak.

Real-time PCR performance was evaluated by using clinical specimens collected from the nine confirmed cases of inhalational anthrax and seven confirmed cases of cutaneous anthrax identified during the bioterrorism-associated anthrax outbreak from October to December 2001. An effort was made to obtain the exact time of collection for each clinical specimen; however, when these data were not available, estimates were made based on other evidence from the medical record. A confirmed case of anthrax was defined as a clinically compatible case of cutaneous or inhalational illness that was either 1) laboratory confirmed by isolation of B. anthracis from an affected tissue or site or 2) accompanied with other laboratory evidence of B. anthracis infection based on at least two supportive laboratory tests, including (a) evidence of B. anthracis DNA by PCR from specimens collected from an affected tissue or site, (b) demonstration of B. anthracis in a clinical specimen by IHC, or (c) fourfold rise in anti-PA IgG. Further testing will be necessary for full evaluation of the utility of these methods on clinical samples. However, as more specimens became available, the LRN PCR was used as part of the laboratory confirmation of anthrax in this outbreak setting. Although real-time PCR results were part of initial confirmation of the diagnosis in 2 patients, all 18 patients were subsequently found to have sufficient laboratory evidence (i.e., culture, serologic testing, or IHC) to confirm case status without considering real-time PCR assay results (Table 1 and 2). In addition, 14 of 18 patients had sufficient laboratory evidence (i.e., real-time PCR, serologic testing, and IHC) to confirm case status without considering culture results (Table 1 and 2).

During the course of the outbreak investigation, clinical specimens were available from 74 patients who had initial symptoms similar to those of anthrax, but in whom the diagnosis was excluded after further evaluation. The exclusion of the diagnosis in these patients was based on the following: 1) the subsequent clinical course was not consistent with anthrax, 2) no laboratory evidence of B. anthracis infection was found, and 3) patient had sufficient negative laboratory evidence to establish that the confirmed-case definition could not be met (i.e., negative culture results or negative results on at least two other supportive laboratory tests).

A total of 279 clinical specimens were tested in parallel fashion by both traditional culture methods and by real-time PCR (Table 3). Two aliquots were prepared from each specimen. From one aliquot DNA was extracted with a MagNa Pure LC instrument (Roche Diagnostics GmbH, Mannheim, Germany) by employing a DNA isolation kit I with the “High Performance” protocol. In addition, select specimens were extracted in duplicate with a Qiagen DNA Mini Kit (Qiagen, Valencia, CA) per manufacturer’s instructions. A second aliquot was used to inoculate bacteriological media for isolation of B. anthracis (7).

Specimens from patients meeting the definition for confirmed anthrax and from those in whom the diagnosis was excluded were tested by LRN PCR assay and traditional culture using the methods described above. For specimens that were unavailable for testing at Centers for Disease Control and Prevention (CDC), culture results reported by the clinical laboratories of the patient’s treating facility were used for case confirmation.

The performance of the LRN PCR assay was compared to that of traditional culture methods by testing environmental specimens collected from throughout the United States during the course of the outbreak by both methods. B. anthracis spores were eluted from swab specimens and other environmental samples in 2.5% pluronic F-68 (Sigma, St. Louis, MO) and then collected by centrifugation through an Ultrafree-CL, 0.45 uM, PVDF membrane filter (Millipore, Bedford, MA). Spores were eluted from the filters with 2.5% pluronic F-68, used to inoculate bacteriologic media, and added directly to real-time PCR assays without further purification or DNA extraction. 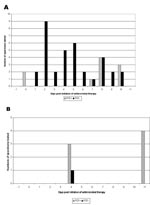 Figure. Results of polymerase chain reaction testing of clinical specimens (for which dates of collection were available) from a patient with inhalational anthrax (patient 2), are illustrated by date of collection relative...

Pleural fluid was available for testing from five patients (patients 1, 2, 8, 10, 11) with inhalational anthrax (Table 4). Of the pleural fluid specimens collected <5 days after the administration of antimicrobial drug therapy, none grew B. anthracis in culture, whereas all five had a positive PCR result. Pleural fluid specimens collected >5 days after antimicrobial agent administration were available only from a single patient (patient 2): all four of these specimens were PCR positive (Figure).

One hundred eighty-six clinical specimens were collected from 74 patients who were subsequently determined not to have either inhalational or cutaneous anthrax; 142 specimens were culture and PCR negative (PCR specificity of 100%, 95% confidence interval 99% to 100%), and the remaining 44 tested by PCR only were also negative.

Isolation of B. anthracis from primarily sterile sites in culture has long been considered the standard of diagnosis for anthrax. However, this method is associated with a diagnostic delay of 12–24 h, and sensitivity is greatly diminished in the setting of prior antimicrobial administration (1). The LRN PCR was invaluable in diagnosing anthrax in patients when culturing B. anthracis failed and has rapidly become an integral part of the laboratory confirmation of anthrax. This real-time PCR also appears to be less affected by prior administration of antimicrobial drugs than culture, a property with important clinical ramifications. PCR positive results were obtained directly on clinical specimens, especially pleural fluids, in one case up to 11 days after the initiation of antimicrobial treatment.

Laboratory confirmation for the seven cutaneous cases primarily relied on IHC and serology as only two clinical samples (one blood and one tissue sample) from two patients grew B. anthracis at the medical facility where the patients were examined and treated. However, the LRN PCR was subsequently attempted on 11 blood samples and 8 tissue samples from six cutaneous cases. Only one blood sample and two tissue samples from three patients were PCR positive (Table 3). CDC received all specimens from patients with cutaneous anthrax after the initiation of antimicrobial drug therapy. This success rate is similar to results of the LRN PCR on fluids (with the exception of pleural fluids) and tissue taken after the initiation of antimicrobial drug therapy on patients with inhalational anthrax.

One advantage of the LRN PCR assay is its rapidity; as a rule, results can be obtained within 1 h from the time samples have been prepared for testing. This rapid result is in striking contrast to the results for all other methods used for laboratory confirmation of anthrax. For example, standard culture methods require at least 24 h, while IHC results can be obtained within 8 h. On the other end of the spectrum is serology that requires paired sera collected at least 10 days apart, making this approach the least helpful in situations where therapeutic and public health decisions need to be instigated rapidly.

Evaluation of the LRN PCR and its performance on clinical specimens was not conducted as a true prospective study as we were, to a degree, limited by the number and type of specimens available, as well as by the emergent response needed to establish the microbiologic diagnosis. However, the number and variety of clinical samples were substantial enough to allow statistically significant comparisons with the current standard, culture. Also, the fact that laboratory confirmation was obtained by either culture or a combination of other supportive laboratory methods allowed for case-based evaluation of the LRN PCR’s sensitivity and specificity. A major advantage of the LRN PCR was its lack of any false-positive results (100% specificity) when used on cultures and directly on clinical specimens. Of the 110 patients clinically suspected to have anthrax, 74 had clinical samples collected and tested by at least three diagnostic approaches (culture, PCR, IHC, or serology) that would allow for a case to be defined as confirmed (culture positive or two supportive tests positive) or suspect (one supportive case positive). Samples from all of these patients were negative in all tests applied, including this LRN PCR. Given the extent and cost of public health and other actions taken after the laboratory confirmation of each anthrax cases in this epidemic, a false-positive PCR could have resulted in unnecessary waste of resources.

In addition to its invaluable use on clinical specimens, the LRN PCR also allowed for the rapid analysis of hundreds of diverse environmental samples throughout the outbreak investigation. If present in these specimens, B. anthracis was in the form of spores. Because B. anthracis spores contain DNA on their surfaces as a result of the sporulation process, environmental specimens can be analyzed in the PCR assay without having to do the DNA extraction, which eliminates the need for complicated and usually inefficient spore lysis methods. Culture methods and LRN PCR results were in agreement 92% (129/140) of the time. For the remaining 11 specimens, 4 were PCR positive and culture negative, and 7 were PCR negative and culture positive. The occasional discrepancies between culture and PCR could be due to inefficient removal of PCR inhibitors, detection of nonviable spores by PCR, and sampling error and volume effects when very few spores were present (5 µL for PCR vs. 100–200 µL for culture).

The LRN PCR assay evaluated and validated in this study detects a B. anthracis–specific chromosomal target as well as targets on both plasmids that are required for full virulence. This assay has served as an important aid in epidemiologic investigations of the recent bioterrorism-associated anthrax outbreak and was rapidly established as a valuable component of laboratory confirmation of anthrax cases. Highly specific results are obtained within a few hours of specimen arrival, making rapid and appropriate actions possible. At the same time, unnecessary panic and administration of antimicrobial drugs and vaccines were prevented when B. anthracis was rapidly excluded from differential diagnosis.