In the 1990s, the Newly Independent and Baltic States of the former Soviet Union experienced the largest diphtheria outbreak since the 1960s; it was caused by Corynebacterium diphtheriae strains of a unique clonal group. To address its origin, we studied 47 clinical isolates from Russia and demonstrated that this clonal group was an integral part of the endemic reservoir that existed in Russia at least 5 years before the epidemic began.

In the pre-vaccine era, diphtheria was a major cause of childhood illness and death worldwide. After the diphtheria toxoid vaccine was introduced, a decline in diphtheria cases was seen where the vaccine was used. In some areas of the Soviet Union, diphtheria vaccination started as early as the 1920s, but it was not included in the general immunization program for children until 1958 (1). After 1958, reported diphtheria cases declined steadily except for a small increase in incidence during the 1980s and the epidemic that started in 1990. In 1991, after the breakup of the Soviet Union, routine childhood vaccination programs were disrupted due to interruption of vaccine supplies to countries in Central Asia, the Caucasus, and the Baltic region. A major diphtheria epidemic began in Russia in 1990; during the next 4 years, it reached all the Newly Independent States and Baltic States of the former Soviet Union (FSU) (1,2). The European Regional Office of the World Health Organization (WHO) now considers this diphtheria outbreak, which resulted in more than 150,000 cases and 4,000 deaths, to be nearly under control (1). Several factors, such as an increased proportion of susceptibles in the population, migration, and a deteriorating health infrastructure, are suspected to be major catalysts for this outbreak (2). However, the role of biological factors of the causative organism is not clear.

To assess the genetic diversity and structure of the bacteria and its toxin, different molecular typing methods have been used successfully as a complement to traditional characterization (3–6). Popovic et al. and de Zoysa et al. identified a particular epidemic clonal group, characterized by ribotyping, multilocus enzyme electrophoreses (MEE), and pulsed-field gel electrophoresis (PFGE), associated with the appearance and spread of this outbreak (7,8). Our study focuses on the origin of this epidemic clonal group and is the first to include a limited number of archival isolates collected more than 30 years before this outbreak began.

A convenience sample of 47 Corynebacterium diphtheriae isolates was available for analysis from a collection of isolates obtained during 1957-1987, before the onset of the recent diphtheria outbreak. These isolates were collected from both carriers (n=37) and patients (n=10) in different regions of Russia. All isolates were kept freeze-dried at the G. N. Gabrichevsky Institute for Epidemiology and Microbiology, Moscow, Russia, and were transported on silica gel packages to the Centers for Disease Control and Prevention, Atlanta, Georgia, for molecular characterization.

All isolates were biotyped by using the commercial API Coryne kit (Biomerieux, Lyon, France). Toxigenicity status was determined by the Elek test, as recommended by WHO (9), and by the polymerase chain reaction (PCR), which targeted both A and B subunits of the tox gene (10).

All the strains were characterized by ribotyping as previously described (11). The hybridization was done by using five oligonucleotide probes according to Regnault et al. (12). Ribotyping pattern designations were based on the scheme established by Popovic et al. (7). A difference in one band was defined as an individual ribotype (RT).

MEE was carried out as previously described (7,11). The electromorphs of the same enzyme were visualized in a starch gel matrix as bands of different migration rates. Each electromorph was considered to represent a distinct allele of the same enzyme. By testing 27 different enzymes, a profile of electromorphs, defining the electrophoretic type (ET) of each strain, was obtained. The genetic relatedness of ETs was illustrated as a dendrogram, which was generated by the average-linkage method of clustering ETs described by Selander et al. (13).

We examined 47 C. diphtheriae isolates collected in the pre-epidemic period (1957-1987) from 10 patients and 37 carriers in different areas of Russia. Thirty-nine strains were of the gravis biotype, 7 were the mitis biotype, and 1 was of the intermedius biotype. All the mitis biotype strains were toxigenic. Among the gravis biotype strains, 36 were toxigenic, and 3 were nontoxigenic. No discrepancies between the results obtained by traditional identification, the API Coryne test, or toxigenicity testing by the Elek test and PCR were detected.

Figure 1. Twelve BstEII ribotypes identified in 47 Corynebacterium diphtheriae isolates collected in the Russian Federation between 1957 and 1987. The figure is composed of ribotype gels exemplifying the different patterns observed in... 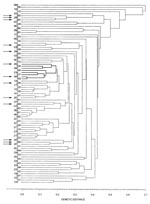 Figure 2. Dendrogram showing the genetic relatedness of 85 electrophoretic types (ETs) of Corynebacterium diphtheriae isolates collected in different countries around the world. Arrows indicate the different ETs identified among the 47 C....

In the pre- and early vaccine era, diphtheria incidence was high in the Soviet Union. After the diphtheria vaccine was introduced, a decrease in incidence was seen in the 1950s. During the mid-1970s, immunization programs resulted in control of diphtheria throughout the country. However, an increase in incidence was noted at the end of 1970 and during the 1980s, and a peak was observed in 1983. This resurgence was associated with a change in the biotype of the circulating C. diphtheriae strains from gravis, which had been dominating for several decades, to mitis (14).

To allow better monitoring of the global spread of diphtheria, the WHO ribotyping database for C. diphtheriae was established at the Pasteur Institute in Paris, France. The institute demonstrated that C. diphtheriae RTs are quite diverse worldwide but remain stable over time (15). Both ribotyping and MEE have provided a significant level of differentiation and reliability and subsequently have been accepted as the standard for molecular subtyping of C. diphtheriae. Thus, we used these molecular methods to characterize our archival isolates.

Twelve different RTs were found in our 47 isolates. Our data show that nine C. diphtheriae isolates from the 1950s and 1960s had an RT pattern (M11e) that was very similar to ribotype M11, which was only seen occasionally in the FSU in the 1990s. Epidemic RT G4 was seen in six toxigenic C. diphtheriae isolates collected from 1984 through 1987 in four distant regions of Russia (Moscow and Moscow region, Anapa, Smolensk, and Sverdlovsk) from both diphtheria patients and carriers; four of these isolates were also members of the ET8 complex.

Our investigation of the origin of the epidemic clonal group determined that, in our strain collection, the earliest reported strain of this clonal group was identified in Smolensk in 1985, and that strains of this clonal group were simultaneously present in several geographically distant areas in Russia from 1985 through 1987. These findings suggest that the current epidemic clone was an integral part of the endemic reservoir that existed in the FSU at least 5 years before the epidemic began. Further studies that would include a large number of gravis biotype strains from throughout the Soviet Union isolated from 1980 through 1985 might unveil where and when strains of the epidemic clone were first associated with disease or carriage.

Dr. Skogen is working at the Department of Microbiology, University Hospital of North Tromsø, Norway. His recent research interests have been in communicable diseases, especially diphtheria, in Russia.