Specimens from a patient of the 2000 Israel West Nile virus epidemic were analyzed by reverse transcription-polymerase chain reaction. Products corresponding to E, NS3, and NS5 sequences were amplified from cerebellar but not from cortical samples. Phylogenetic analyses indicated a closer relationship of this isolate to 1996 Romanian and 1999 Russian than to 1998-99 Israeli or 1999 New York isolates.

West Nile fever is typically a mild febrile illness characterized by headache, myalgias, lymphadenopathy, and a maculopapular rash; West Nile fever occurs sporadically throughout endemic areas of northeastern Africa and tropical Asia (1–5). The causative agent, West Nile virus (WNV), is a member of the genus Flavivirus (family Flaviviridae), which is grouped together with Alfuy virus, Cacipacore virus, Koutango virus, Japanese encephalitis virus, Kunjin virus, Murray Valley encephalitis virus, St. Louis encephalitis virus, Usutu virus, and Yaounde virus in the Japanese encephalitis virus antigenic complex (6,7). Two different lineages (I and II) of WNV are characterized genetically (8). Whereas lineage II viruses are isolated in endemic areas, lineage I viruses are isolated during epidemic outbreaks of WNV infection and may cause severe encephalitis in the elderly or immunosuppressed persons. Epidemics of West Nile fever were first reported in the 1950s in Israel (2) and the 1970s in South Africa (9). Sites of notable recent outbreaks include Romania (1996, 1997), Italy (1998), Russia (1999), France (2000), United States (1999, 2000) and Israel (2000) (5,10). Sequence analysis of the WNV responsible for the United States outbreak in 1999 (WNV-NY1999) showed a close phylogenetic relationship to a WNV isolated from a goose in Israel in 1998 (WNV-ISR1998) (11,12).

WNV is transmitted mainly by mosquito vectors, although it has also been isolated in several tick species (3,5,13). Birds are an important WNV reservoir. In several avian species, virus replication generates serum titers sufficient to sustain arthropod transmission (4,5). Birds, during seasonal migrations, are also believed to be instrumental in the geographic spread of WNV (3–5,14). The virus is only occasionally transmitted to humans or other mammals. Viremia in mammals is low level; thus, mammals are considered to be dead-end hosts.

From July through November 2000, a WNV epidemic occurred in central and northern Israel. More than 430 people were diagnosed with WNV infection; 29 of these patients had fatal encephalitis. We report phylogenetic analysis of WNV sequences isolated from the brain of an encephalitis patient from the 2000 Israel epidemic.

A 72-year-old woman with a history of recurrent meningioma of the sphenoidal ridge, dementia, and depression was hospitalized because of fever and general deterioration of 5 days’ duration. On admission, the patient was responsive only to painful stimuli and had generalized muscle stiffness and limb tremors. Clinical and laboratory values were consistent with viral encephalitis; thus, the patient was initially treated with intravenous acyclovir for presumptive herpes simplex encephalitis. When polymerase chain reaction (PCR) analysis of cerebrospinal fluid (CSF) showed no evidence of herpes simplex virus infection, and WNV antibodies were detected in serum and CSF, acyclovir was discontinued and ribavirin was initiated at an oral dosage of 2.4 g per day. The patient’s clinical status continued to deteriorate with aspiration pneumonia and intermittent generalized seizures. Intravenous immunoglobulin was added (35 g/d for 2 days) without improvement. Approximately one month after onset of illness, the patient died of respiratory failure.

Postmortem examination of the brain showed multiple meningiomas, generalized atrophy, and surgical resection of the right parietal lobe. Histology was remarkable for neurofibrillary plaques consistent with Alzheimer’s disease, and scattered microglial nodules and perivascular lymphocytic inflammation in the medulla, pons, and midbrain were consistent with viral encephalitis.

Signal of cerebellar amplification products in ethidium bromide-stained gels was reduced in comparison with similar studies performed with brain materials from four patients of the 1999 New York City outbreak (data not shown; New York patients were 75 years to 80 years of age, 3 male, 1 female, who died of severe WNV encephalitis during the 1999 outbreak [16]). The relative virus load was 140 copies/200 ng RNA in the Israeli sample, indicated by 5´-nuclease real-time RT-PCR (17), compared with 7000 to 20 copies/200 ng RNA in specimens analyzed from the New York City outbreak (Table). However, since the virus load of the sample from Israel was within the range of virus loads observed with the New York samples, this result for a single Israeli sample may not indicate a strain difference. Quantitative analysis was restricted to the NS5 target because no signal was obtained with primer/probe set prNS3 (fwd, 5´- GCa CTG AGA GGA CTG CCc AT; probe, 5´-6FAM-TAc CAG ACA TCc GCA GTG cCC AGA-T-TAMRA; rev, 5´- TGg GTG AGG GTa GCA TGa CA), because of point mutations in WNV-ISR2000 sequence that prevented efficient hybridization with the primer and probe oligonucleotides (fwd - 2 mismatches, probe – 3 mismatches, rev - 3 mismatches; given above in lower case). Sensitivity was not substantially reduced in assays with primer/probe set prNS5, which had one mismatch in the 3′-terminal sequence of the probe oligonucleotide (Table). 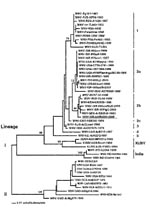 The extent to which this WNV genotype contributed to human disease in the 2000 epidemic remains undetermined. WNV-ISR-hISR2000 may have been carried into Israel by migrating birds from reservoirs in southeastern Europe or reservoirs in northeastern Africa, where a highly related virus was isolated in 1998 (WNV-KEN-KN3829-1998) (18). The 2000 Israel isolates in birds (and pigs, strains ISR-00GooMaS and ISR-00PigC) were different from the previous Israeli isolates (1997/98/99; strains ISR-97Goo1, ISR-98Goo1, ISR-IS98St1, ISR-99Goo, and ISR-99Gull [Figure]), but similar to the human isolate. Nonetheless, precedent exists for implicating more than one genotypic variant in a WNV outbreak. During the 1999 outbreak in Volgograd, Russia, two different genotypes were isolated: WNV-RUS-ASTR986-1999 (similar to 1997-98-99 Israeli and the WNV-NY1999 isolates, genotype lineage I subtype 2a) and WNV-VLG22889/WNV-RUS-VLG4-1999 (similar to WNV-ISR-hISR2000, subtype 2b [Figure]) (19). Indeed, even more divergent genotypes were identified during the 1996-97 WNV outbreak in Romania (WNV-RO97-50-1996 similar to WNV-ISR-hISR2000, genotype lineage I subtype 2b; WNV-RO96-1030-1996 and WNV-ROM96(0334)-1996, belonging to a different subtype, subtype 1 [Figure]) (20). The fact that no such divergence of genotypes of WNV isolates was observed during the 1999 New York epidemic (Figure) was interpreted as being compatible with a single, new introduction of this virus to the Western Hemisphere. While this manuscript was under review, another group reported WNV sequences from four patients of the 2000 Israel outbreak: two isolates most closely related to WNV-R097-50-1996 and two identical to the WNV-NY1999isolates (21). Analysis of additional isolates from the Israel 2000 and other outbreaks, including isolates obtained in 2000, 2001, and subsequent years in the USA, will be required to establish the extent to which avian migration and viral mutation contribute to the epidemiology of WNV-related disease.

Dr. Briese is associate director of the Emerging Diseases Laboratory and assistant professor at the University of California, Irvine. In summer 2002, he will join the faculty in the Mailman School of Public Health at Columbia University as an associate professor of Epidemiology.

This study was supported by the National Institutes of Health (NS-29425).