Mycobacterium avium subsp. paratuberculosis (MAP), the causative agent of Johne disease in ruminants, has been incriminated as the cause of Crohn disease in humans. We report the first case of human infection with MAP in a patient with HIV; infection was confirmed by obtaining isolates from several different specimen types.

MAP is the causative agent of Johne disease, a chronic granulomatous ileitis occurring mainly in ruminants (4). MAP has been incriminated as the cause of Crohn disease in humans (5,6), although conflicting findings have been reported. However, culture-confirmed cases of MAP in human specimens remain rare (5,6). 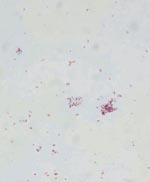 For species identification, AccuProbe assays (Gen-Probe, San Diego, CA) for M. avium complex were performed on liquid media, all yielding strong positive results. However, repeated attempts to perform drug-susceptibility testing in the liquid BACTEC 460TB system were unsuccessful because of insufficient growth of the control. Since M. avium complex usually grows very well, the primary identification was questionable. Thus, polymerase chain reaction (PCR) for the amplification of a part of the mycobacterial gene coding for the ribosomal 16S RNA and additional sequencing was performed from two positive cultures (7). The resulting sequence was compared with those stored in the International Nucleotide Sequence Database (8), showing the signature sequence of M. avium/M. paratuberculosis, which is identical for both species and confirmed the AccuProbe results. For further differentiation between M. avium and MAP, PCR targeting the insertion sequence IS900 (primer: IS900-1: 5´ TGTTCGGGGCCGTCGCTTAG; IS900-2: 5´-CGTTCCAGCGCCGAAAGTAT), which is present only in MAP strains (9), was done with the two most recent positive cultures. This assay showed clearly positive results from the two cultures tested and the MAP type strain, while the M. avium strains remained negative (Figure 2).

Because acid-fast bacilli were identified in biopsy specimens, treatment was started with ethambutol, ciprofloxacin, clarithromycin, and rifabutin. Initially, no clinical improvement was observed, and the patient’s weight loss and daily fever of 39C°–40°C continued. When ciprofloxacin was replaced with levofloxacin, progression of the infection appeared to stop. However, the patient died from cardiorespiratory failure.

We describe the case of an HIV-infected patient who had a severe mycobacterial disorder thought to be caused by M. avium complex. Because growth was insufficient for susceptibility testing, the presence of MAP was assumed; however, the assumption was made after 2 years, because of difficulties in isolating MAP from human specimens (e.g., blood) in media not thought to enable its growth. Finally, the demonstration of the insertion sequence IS900, an assay not routinely performed in human diagnostic laboratories like ours, confirmed this hypothesis.

MAP isolated from human specimens has not yet been demonstrated by routine techniques. Several studies have reported the presence of MAP DNA in association with Crohn disease, although culture confirmation remains rare in these patients (5,6).

In the case we describe, mycobacterial growth could be detected in liquid media in 8 of 21 specimens, all confirmed as M. avium complex/M. paratuberculosis. However, because of the limited growth, we assume the presence of MAP even in those specimens not tested by IS900 PCR. These results indicate that MAP can grow to a limited extent in routine liquid media without mycobactin supplementation, at least if present in high amounts in the specimen.

Susceptibility testing of the isolated strains could not be performed because of insufficient growth. Reports on susceptibility testing of MAP are rare, yet data obtained by a luciferase-based susceptibility assay (10) indicate susceptibility at least to clarithromycin and rifabutin, which were included in therapy. However, the patient’s response to treatment was not clearly positive and may have been hampered by his general poor health. This report suggests a pathogenic role of MAP for immunocompromised patients, raising the question of whether this strain so far has not been detected because of its limited growth, whether it has been misidentified as M. avium, or whether its occurrence in infections is low. However, herd prevalence of bovine paratuberculosis has been reported to range from 7% to 55% in Europe and to reach approximately 40% in stocks of >300 animals in the United States (4). Thus, consumption of inadequately pasteurized dairy products may be a possible risk for infection, especially for immunocompromised patients.

Dr. Richter is deputy of the German National Reference Center for Mycobacteria, Borstel. She is a specialist in molecular microbiology.

We thank Marie Thorel for providing the MAP type strain used as positive control for IS900 PCR and Frauke Schaefer for excellent technical assistance.