Two closely related zoonotic ehrlichiae, Ehrlichia chaffeensis and E. ewingii, are transmitted by Amblyomma americanum, the lone star tick. Because white-tailed deer (Odocoileus virginianus) are critical hosts for all mobile stages of A. americanum and are important vertebrate reservoirs of E. chaffeensis, we investigated whether deer may be infected with E. ewingii, a cause of granulocytotropic ehrlichiosis in humans and dogs. To test for E. ewingii infection, we used polymerase chain reaction and inoculation of fawns with whole blood from wild deer. Of 110 deer tested from 20 locations in 8 U.S. states, 6 (5.5%) were positive for E. ewingii. In addition, natural E. ewingii infection was confirmed through infection of captive fawns. These findings expand the geographic distribution of E. ewingii, along with risk for human infection, to include areas of Kentucky, Georgia, and South Carolina. These data suggest that white-tailed deer may be an important reservoir for E. ewingii.

Ehrlichia ewingii, one of the causative agents of canine granulocytic ehrlichiosis, has been reported in dogs in several U.S. states, including Oklahoma, North Carolina, and Virginia (1–4). Human infections with E. ewingii have been reported from Missouri, Oklahoma, and Tennessee (5,6); the clinical disease, similar to that caused by other Ehrlichia spp., is characterized by fever, headache, and thrombocytopenia, with or without leukopenia (5–7). Experimentally, the lone star tick (Amblyomma americanum) has been shown to be a competent vector (8); however, natural infection of two other tick species, Rhipicephalus sanguineus and Dermacentor variabilis, has been reported in Oklahoma (2).

From September 1996 to July 2001, whole blood samples and serum from 110 deer from 20 sites (Table 1) in the southeastern United States were collected in vacutainer EDTA tubes (whole blood) and serum tubes (Becton, Dickinson and Company, Franklin Lakes, NJ). For PCR, two blood preparation protocols were followed. During the 1996–1997 collection period, leukocytes were separated from whole blood as described (9); during the 2000–2001 period, whole blood was extracted for PCR assays. Both leukocytes and whole blood samples were frozen at –20°C until PCR testing was done. Serum samples were held in vials at –20°C until serologic testing.

Because A. americanum is the only experimentally proven vector for E. ewingii, locations with deer infested with A. americanum were selected for this study. Serum from each deer was tested for antibodies reactive to E. chaffeensis by the indirect immunofluorescent antibody (IFA) test as described (10), with the following modifications. Briefly, sera were screened at a dilution of 1:128 by using E. chaffeensis antigen slides obtained from Focus Technologies (formerly MRL Diagnostics, Cypress, CA). A 1:50 dilution of fluorescein isothiocyanate-labeled rabbit anti-deer immunoglobulin G (Kirkegaard & Perry Laboratories, Inc., Gaithersburg, MD) was used as conjugate.

Two 4-month-old, laboratory-reared white-tailed fawns (76 and 81) were housed in a tick-free facility. Before inoculation both fawns were negative for antibodies reactive to E. chaffeensis and PCR-negative for both E. chaffeensis and E. ewingii. Whole blood for injection was obtained from five wild source deer (WTD 1–5) collected at Piedmont National Wildlife Refuge (NWR) in Jones County, Georgia, on July 24, 2001. A whole blood sample from each wild deer was also cultured in DH82 canine macrophage cells as described (12).

Fawns were anesthetized by intramuscular injection of tiletamine HCL and zolazepam HCL (4.4 mg/kg body weight; Fort Dodge Animal Health, Fort Dodge, IA) and xylaxine (2.2 mg/kg; Butler, Columbus, OH) and were reversed with intravenous injection of yohimbine (0.125 mg/kg; Lloyd Laboratories, Inc., Shenandoah, IA). Equal volumes of whole blood in EDTA from WTD1 and WTD2 were pooled, and a total of 8 mL was injected into fawn 76 in 2-mL aliquots by each of four routes (intravenous, intradermal, subcutaneous, and intraperitoneal). Fawn 81 was injected in the same way with a total of 8 mL of pooled blood from WTD3–5. Blood samples were collected from both fawns on 5, 9, 15, 20, 47, 68, and 110 days postinjection (DPI) for PCR, serologic tests, and blood smears. Blood was tested by PCR for E. ewingii and E. chaffeensis as described above and for the human granulocytic ehrlichiosis (HGE) agent (Anaplasma phagocytophila) by using primers GE9f and GA1UR, as described (13). 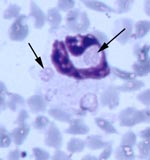 Our data provide the first evidence that white-tailed deer are naturally infected with E. ewingii; this information extends the geographic distribution of E. ewingii to include areas of Kentucky, Georgia, and South Carolina. Before this report, the only reported vertebrate hosts for E. ewingii were humans and dogs. By combining data from PCR and injection studies, we showed that at least 8 (7.3%) of 110 deer were infected with E. ewingii, which is similar to prevalence rates previously reported for dogs. Infection with E. ewingii has been reported in 6.2%-15.8% of dogs from southeastern Virginia, Oklahoma, and southeastern North Carolina (2,4,14). Because of the limited sensitivity of PCR for detection of this organism, this percentage may represent a substantial underestimation of the actual prevalence of E. ewingii infection in white-tailed deer. Our data suggest that the distribution of E. ewingii and hence the risk for human and canine infection may be more widespread than previously reported and may correspond with the distribution of A. americanum.

Although whole blood samples from all five deer (WTD1–5) collected at Piedmont NWR in Georgia were negative by PCR, Ehrlichia spp. infections developed in both inoculated fawns. Therefore, at least two of the Piedmont NWR deer were infected with E. ewingii, since E. ewingii infection was identified in both fawns. In addition, at least one Piedmont NWR deer was positive for E. chaffeensis, as fawn 81 became infected and WTD5 was culture positive. Because a much smaller volume of blood was used for PCR (20–200 µL) than for culture (5 mL) or injection of fawns (8 mL), low numbers of organisms may have been more readily detected by the other two methods. Consistent with results of previous studies (12,15), our data indicate that use of PCR alone as a screening tool may fail to detect acute infections of white-tailed deer with Ehrlichia spp.

Mr. Yabsley is a doctoral student in the College of Veterinary Medicine at the University of Georgia. His area of research is the epidemiology of zoonotic parasites, with a particular focus on tick-borne pathogens.