Bites by rabid dogs are the source of 35,000–50,000 human rabies deaths each year globally (1), whereas most human rabies deaths in the United States are attributed to unrecognized exposures to rabid bats. Particular attention has focused upon two relatively rare bat species (Lasionycteris noctivagans and Pipistrellus subflavus) because rabies variants associated with these species (variants) account for approximately 70% of human cases and 75% of cryptic rabies deaths (2–6).

Given that L. noctivagans and P. subflavus variants appear to be infrequently encountered, two explanations have been proposed to explain their prevalence among cryptic human rabies deaths associated with bats. The small vector hypothesis suggests a failure to recognize that a bite has occurred when a small bat is involved (7,12). Absence of a bite history may result from inaccurate documentation when a patient could not be questioned directly or was not lucid. In 18 of 34 cases with no bite history, however, documented contact with a potentially rabid animal could have contributed to an unrecognized bite (i.e., physical contact with bats in 11 cases, bats in residence in 4 cases, and contact with a known sick domestic animal in 3 cases). Among these contacts, 11 involved L. noctivagans and P. subflavus variants. In addition, bites by smaller bat species, such as Eastern Pipistrelles, may be more likely to go unnoticed than bites by larger bats, which explains why more cases are associated with this species. Wounds from the teeth of small bat species are not easily seen without careful examination (13,14), possibly leading to the impression that a bite has not occurred.

A second hypothesis was suggested by results from experimental data comparing rabies virus isolates from Silver-haired Bats with those from domestic dogs and a coyote (15,16). These data showed that, although both viruses replicated equally well in neuroblastoma cells, rabies viruses from Silver-haired Bats replicated to higher titers in fibroblast and epithelial cells, particularly at a temperature of <34°C. Such growth characteristics might facilitate successful infection after a superficial bite. Thus, superficial contact may occur frequently between bats and terrestrial mammals (including humans), but may be unlikely to result in a productive infection unless L. noctivagans and P. subflavus variants are involved (the increased infectivity hypothesis). Although these experimental data suggest that L. noctivagans and P. subflavus variants have evolved increased infectivity, comparison between viruses associated with Silver-haired Bats and dogs (including one coyote) is not sufficient to pinpoint whether increased infectivity evolved in the common ancestor of L. noctivagans and P. subflavus variants and, thereby, is relevant to the noted prevalence of these variants among human rabies deaths. 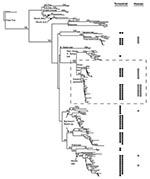 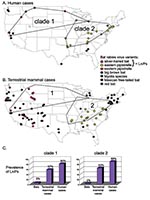 Our study included 13 terrestrial mammal species, both domesticated and wild, suggesting that exposure to bat species likely occurred in a variety of habitats, including more remote forest habitats. Our data set was comprised mostly of foxes and cats (two species likely to capture and feed upon bats), but we had no reason to suspect that their behavior would create a disproportionate opportunity for infection by L. noctivagans and P. subflavus variants compared with other bat variants.

While our data do not invalidate the small vector hypothesis, the terrestrial mammal data show that even when vector size does not play a role in determining whether bat bites are recognized, L. noctivagans and P. subflavus variants are still the most prevalent rabies virus variants among bat-associated terrestrial mammal deaths in the northwestern and southeastern United States. For human rabies cases, small vector size may still play a role in the probability of detecting a bat bite, while the increased infectivity of L. noctivagans and P. subflavus variants enhances the likelihood of a successful infection following a superficial bite. Additional experimental data (e.g., site-directed mutagenesis) will be necessary to show definitively whether L. noctivagans and P. subflavus variants have evolved genetic changes associated with increased infectivity. Nonetheless, comparisons of phylogenetic patterns between independent datasets in which one data set can be used to control for one or more potentially relevant parameters offers a valid method of hypothesis testing. Additionally, through phylogenetic analyses such as these, we can target those taxa and genomic regions that warrant further investigation.

We thank the staff members at the U.S. and foreign state health departments for their submissions of invaluable samples included in our analyses. We also thank J. Bull, F. Burbrink, J. Childs, M. Hellberg, B. Mahy, J. McGuire, M. Noor, J. O’Connor, D. Pollock, and the scientific staff in Viral and Rickettsial Zoonoses Branch, Division of Viral and Rickettsial Diseases, National Center for Infectious Diseases, Centers for Disease Control and Prevention for their fruitful discussions and helpful suggestions.