Of 384 Salmonella isolates collected from 1997 to 2000 in a university hospital in Taiwan, six ceftriaxone-resistant isolates of Salmonella enterica serovar Typhimurium were found in two patients in 2000. The resistance determinants were on conjugative plasmids that encoded a CMY-2–like cephalosporinase. During the study period, the proportion of CMY-2–like enzyme producers among Escherichia coli increased rapidly from 0.2% in early 1999 to >4.0% in late 2000. Klebsiella pneumoniae isolates producing a CMY-2–like β-lactamase did not emerge until 2000. The presence of blaCMY-containing plasmids with an identical restriction pattern from Salmonella, E. coli, and K. pneumoniae isolates was found, which suggests interspecies spread and horizontal transfer of the resistance determinant. Various nosocomial and community-acquired infections were associated with the CMY-2–like enzyme producers. Our study suggests that the spread of plasmid-mediated CMY-2–like β-lactamases is an emerging threat to hospitalized patients and the public in Taiwan.

Because of increasing rates of antimicrobial resistance in salmonellae worldwide (1–4), extended-spectrum cephalosporins, especially ceftriaxone, are frequently used to treat invasive salmonellosis. Since the early 1990s, ceftriaxone-resistant salmonellae have been noted in many countries, including France, Argentina, Algeria, Tunisia, Turkey, Spain, Latvia, the United States, and Hungary (5–17), with resistance conferred by various class A extended-spectrum β-lactamases or class C cephalosporinases (18). These β-lactamases in salmonellae are usually encoded on transmissible plasmids (5–11,13–17), which could be acquired from other multidrug-resistant Enterobacteriaceae, such as Klebsiella pneumoniae or Escherichia coli (10,19).

From January 1997 to December 2000, a total of 384 Salmonella isolates from 324 patients were collected at the National Cheng Kung University Hospital, a tertiary-care referral center with 900 beds in southern Taiwan. According to the criteria of the National Committee for Clinical Laboratory Standards (NCCLS) for the disk diffusion method, we selected for further investigation the isolates that exhibited resistance or intermediate resistance to cefpodoxime, ceftazidime, aztreonam, cefotaxime, ceftriaxone, cefoperazone, or cefixime (22). For comparison, 5,520 E. coli isolates and 3,680 K. pneumoniae isolates collected during the same period were included. Of these isolates, 1,210 nonrepetitive E. coli isolates collected from January to September 1999 were investigated previously (23). The 1997 and 1998 isolates were randomly collected and the 1999 and 2000 isolates were consecutively collected. Salmonella isolates were serotyped according to the Kauffman and White scheme (24) by using somatic and flagellar antigens (Becton Dickinson Microbiology, Cockeysville, MD).

We reviewed the medical records of patients infected with or colonized by the organisms being studied. Patients who provided samples positive for the organisms collected from any body site but who had no related signs or symptoms of infections were considered colonized. Nosocomial acquisition of infections in the teaching hospital was defined according to the 1988 definitions from the Centers for Disease Control (25). Patients transferred from other hospitals or nursing homes with infections occurring <48 h after admission were considered to have acquired the infections at the other locations. Hospitalization histories for the previous locations were recorded for outpatients and for inpatients who were colonized by the studied organisms and who provided samples within 48 h after admission.

Conjugation experiments were performed by the liquid mating-out assay as described (29) with streptomycin-resistant E. coli C600 as the recipient (30). Transconjugants were selected on tryptic soy agar plates supplemented by 500 µg of streptomycin and 10 µg of ceftazidime per milliliter. Plasmids from transconjugants were extracted by using a rapid alkaline lysis procedure (31). We analyzed restriction fragment length polymorphism of transferred plasmids using agarose gel electrophoresis of plasmid DNA samples treated with the restriction endonuclease EcoRI (Roche Molecular Biochemicals, Mannheim, Germany). The restricted plasmid DNA samples were then transferred to a nylon membrane (Amersham Pharmacia Biotech) and subjected to Southern hybridization. The plasmid sizes of transconjugants were estimated by adding restriction fragments.

Plasmid preparations from clinical isolates and their transconjugants were used as templates in polymerase chain reaction (PCR) assays. Genes related to blaTEM, blaSHV, blaCMY-1, blacmy-2, and blaCTX-M-3 were amplified with the oligonucleotide primers as described (23). Primers 5´-ATAAAATTCTTGAAGACGAAA-3´ and 5´-GACAGTTACCAATGCTTAATCA-3´, corresponding to nucleotides –5 to 15 and 1,074 to 1,053, respectively, of the blaTEM-1 structural gene (32), were used to amplify the entire sequences of blaTEM-related genes. Primers AmpC-1C (5´-CTGCTGCTGACAGCCTCTTT-3´) and AmpC-1B (5´-TTTTCAAGAATGCGCCAGGC-3´) (23), which correspond to nucleotides 28–47 and 1,136–1,117, respectively, of the blaCMY-2 structural gene (33), were used to amplify an internal fragment of approximately 95% of blaCMY-2–related genes. Both strands of the amplified products were sequenced on an ABI PRISM 310 automated sequencer (Applied Biosystems, Foster City, CA). Colony hybridization and Southern hybridization were performed as described (34,35) with DNA probes prepared from the PCR-generated amplicons. The probes were labeled with [α-32P]dCTP (Amersham Pharmacia Biotech) by using the random priming technique with a commercial kit (GibcoBRL Life Technologies, Gaithersburg, MD).

Figure 1. Ribotyping profiles of the two ceftriaxone-resistant Salmonella isolates generated by digestion of chromosomal DNA with SphI and PstI (lanes 1 and 2) or EcoRI (lanes 3 and 4). Lanes 1 and...

Six of 384 Salmonella isolates displayed intermediate resistance to ceftriaxone by the disk diffusion method. The isolates were recovered from stool samples of two patients who had community-acquired enteric infections in August and November 2000, respectively, which were identified as S. enterica serovar Typhimurium. One isolate from each patient (isolates ST275/00 and ST595/00) was investigated further. Both isolates demonstrated reduced susceptibilities to ceftazidime (MIC 64 µg/mL), cefotaxime (MIC 16 µg/mL), ceftriaxone (MIC 32 µg/mL), cefoxitin (MIC 128 µg/mL), and amoxicillin-clavulanic acid (MIC 64 µg/mL) and were susceptible to imipenem (MIC 0.25 µg/mL). Both isolates were susceptible to ciprofloxacin and trimethoprim-sulfamethoxazole by the disk diffusion method. Isolate ST275/00 was resistant to chloramphenicol, while isolate ST595/00 was susceptible. Isoelectric focusing showed that both isolates expressed two β-lactamases focusing at pIs 5.4 and 9.0, suggesting that they produced a TEM-1–like enzyme and an AmpC-like β-lactamase. Both isolates yielded an approximately 1.1-kb DNA fragment in PCR with primers for blaCMY-2–like genes, and the amplified sequences obtained by nucleotide sequencing were identical to the homologous region of blaCMY-2, which encodes a class C extended-spectrum cephalosporinase (33). A narrow-spectrum β-lactamase gene, blaTEM-1 (18) was also detected by PCR and nucleotide sequencing in both isolates. The two ceftriaxone-resistant Salmonella isolates had different ribotypes, suggesting that they are of different clones (Figure 1).

Prevalence of the blaCMY-2–Like Gene in E. coli and K. pneumoniae Isolates

Figure 2. Prevalence rates of the blaCMY-2–like gene among clinical isolates of Escherichia coli (□) and percentage of the new cases infected with or colonized by the E. coli isolates producing the CMY-2-like...

We found that 659 of 5,520 E. coli and 409 of 3,680 K. pneumoniae isolates showed resistance to at least one extended-spectrum cephalosporin by the disk diffusion test. These isolates were subjected to colony hybridization and PCR assays. Of these isolates, 97 E. coli isolates from 48 patients and 4 K. pneumoniae isolates from 2 patients gave a strong signal in colony hybridization with the blaCMY-2 probe and gave positive results in PCR with the primers for blaCMY-2. Sequence analysis indicated that the sequences of all amplicons were identical to the homologous region of blaCMY-2. The prevalence rates of CMY-2–like enzyme producers in E. coli increased from 0% in 1997 and 1998 to >4% in late 2000 (Figure 2). Among the patients with E. coli isolates, the incidence of patients with blaCMY-positive isolates increased from 0.0% in 1997 and 1998 to 3.6% in late 2000 (Figure 2).

The sources of E. coli isolates harboring a blaCMY-2–like gene and the infections associated with these isolates are summarized in the Table. The isolates and patients are distributed according to the likely locations of infection or colonization. Of the 97 blaCMY-positive E. coli isolates, 8 isolates were likely acquired in the community by eight patients. Six of these patients had never been hospitalized, and two had been hospitalized 10 months or 2 years before isolation. K. pneumoniae isolates producing the CMY-2–like enzyme were associated with nosocomial bloodstream infections in two patients. Notably, E. coli (EC811/00) and K. pneumoniae (KP218/00) isolates were recovered from the blood sample of a single patient.

One isolate from each patient was subjected to conjugation experiments and plasmid analysis. The blaCMY-positive plasmids were successfully transferred to E. coli C600 from 2 Salmonella isolates, 40 of 48 E. coli isolates, and 2 K. pneumoniae isolates. All E. coli transconjugants and their plasmid donors showed decreased susceptibilities to ceftazidime (MIC >32 µg/mL), cefotaxime (MIC >16 µg/mL), ceftriaxone (MIC >32 µg/mL), and cefoxitin (MIC >64 µg/mL). The sizes of the transferred plasmids ranged from approximately 65 kb to >100 kb. 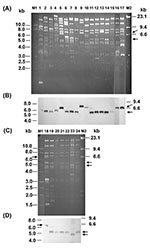 Figure 3. EcoRI restriction patterns of plasmids from Escherichia coli transconjugants of clinical isolates (A and C) with a CMY-2-like enzyme and blaCMY Southern hybridization (B and D). Lanes 1–19, restriction profiles (TP1–TP19)...

Restricted by EcoRI, the plasmids from transconjugants of E. coli isolates showed 19 restriction patterns, designated TP1–TP19 (Figures 3A and 3C). Patterns TP17 (lane 17) and TP19 (lane 19), the most common patterns, were shown by 6 and 17 transferred plasmids, respectively. Of the 17 isolates with a TP19 plasmid, 3 were acquired from nursing homes and 5 from the community. Of the six isolates with a TP17 plasmid, two could have been acquired from the community. We considered that the remaining isolates with a TP17 or TP19 plasmid were acquired in the university hospital. Each of the remaining 17 patterns was shown by a single transferred plasmid. The TP19 pattern is the only restriction pattern displayed by transconjugants of all three studied bacterial species: Salmonella (lane 21), K. pneumoniae (lane 22), and E. coli (lane 24). Notably, K. pneumoniae isolate KP218/00 and E. coli isolate EC811/00, from the same patient, both had a TP19-type plasmid. The plasmids from transconjugants of Salmonella isolate ST275/00 (lane 20) and another K. pneumoniae isolate KP1905/00 (lane 21) showed two distinct restriction patterns. The presence of the blaCMY-2–like gene on plasmids was confirmed by Southern hybridization with the blaCMY-2 probe (Figures 3B and 3D).

Conjugation experiments and plasmid analysis demonstrated the prevalence of conjugative resistance plasmids TP17 and TP19 among E. coli isolates. These E. coli isolates were recovered from patients hospitalized in the teaching hospital, transferred from nursing homes, or without recent hospitalization histories (Figure 3). Furthermore, the TP19 plasmid was found in a Salmonella strain and a K. pneumoniae strain, which suggests the interspecies spread of the blaCMY-2–like gene among different health-care settings and the community in Taiwan. The dissemination of the resistance determinant is probably partly because of horizontal transfer of endemic resistance plasmids.

All K. pneumoniae isolates producing the CMY-2–like enzyme were acquired by patients hospitalized in the university hospital. Producers of the CMY-2–like enzyme in K. pneumoniae were not found until 2000 and, even then, remained very rare (38). Isolate KP218/00 (lane 22, Figure 3C) and E. coli isolate EC811/00 (lane 24, Figure 3C) were obtained from the same patient, and both isolates had a TP19 plasmid, suggesting interspecies spread of a resistance plasmid. Thus, the acquisition of the blaCMY-2 gene by K. pneumoniae in this hospital was likely also a recent event, which occurred after spread of the resistance determinant.

Enterobacteriaceae with plasmid-encoded class C cephalosporinases are typically resistant to cephamycins, extended-spectrum cephalosporins, and monobactams (19). No standard methods exist to detect class C cephalosporinases (39). Failure to detect and report CMY-2–like enzyme producers, and a lack of infection control measures against such organisms might be partially responsible for the rapid spread of the blaCMY-2–like gene in E. coli and the increased cases of infections caused by such organisms in our hospital (Table). With the discovery of Salmonella isolates producing the CMY-2–like enzyme in Taiwan, our study suggests that the cephalosporinase could become an emerging threat, not only to hospitalized patients, but also to public health. Constant and consistent surveillance is needed to prevent its further spread.

The National Science Council, Taiwan (grant NSC 91-2314-B-006-002) and the Centers for Disease Control and Prevention, the Department of Health, and the Executive Yuan, Taiwan (grant DOH 91-DC1033) provided financial support for this research.