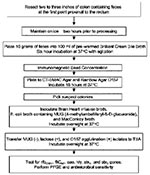 For PFGE, DNA was digested with 50 U XbaI (Invitrogen Corp., Carlsbad, CA) for 4 h at 37°C. PFGE was performed by using a CHEF Mapper XA system (Bio-Rad, Hercules, CA) at 14°C with pulses ramping from 2.16 s to 63.8 s over 18 h. PFGE patterns were evaluated visually, and isolates were assigned to the same pulsotype when exhibiting a difference of <3 bands from the index isolate. Ribotyping of the E. coli O157 isolates was done by using a RiboPrinter (Qualicon, Inc., Wilmington, DE) as described in the user’s manual. Restriction digests were performed on E. coli O157 isolates by using the EcoRI enzyme (Qualicon, Inc.).

The clonal nature of the isolates that were isolated on a particular day suggests transmission of E. coli O157 between pigs. Unfortunately, we did not have access to information concerning the source of the pigs from which the samples were collected, the number of pigs slaughtered from a given farm, or the holding facilities and grouping of the pigs before slaughter. Therefore, we do not know whether E. coli O157 transmission between pigs occurred on the farm, in transit, or while the pigs were in a holding pen at the slaughterhouse.

Dr. Feder is a research microbiologist with the U.S. Department of Agriculture. Her research interests include diagnostic microbiology, molecular epidemiology, and assay development of zoonotic pathogens, primarily Escherichia coli O157:H7 and Salmonella.

We thank Connie Briggs and. Lori Bagi for their technical support and assistance and Takiyah Ball and Jovita Hermosillo for their expertise in antimicrobial susceptibility testing.

1Presented in part at the 102nd Annual Meeting of the American Society of Microbiologists, Salt Lake City, Utah, May 2002.