Entamoeba moshkovskii, considered to be primarily a free-living ameba, is indistinguishable in its cyst and trophozoite forms from E. histolytica (the cause of invasive amebiasis) and E. dispar (a common noninvasive parasite), except in cases of invasive disease when E. histolytica trophozoites may contain ingested red blood cells. E. moshkovskii has so far rarely been shown to infect humans; however, the organism appears to be ubiquitous in anoxic sediments. Although the early isolations of this species were from sewage, E. moshkovskii can also be found in environments ranging from clean riverine sediments to brackish coastal pools (1). E. moshkovskii is osmotolerant, can be cultured at room temperature, and is resistant to emetine, all characteristics that distinguish it from E. histolytica and E. dispar (2–5). Human isolates of E. moshkovskii to date have come from North America, Italy, South Africa, and Bangladesh, and they have never been associated with disease (5,6). However, few studies have actually set out to identify such infections (7).

Fecal specimens included in this study were from 109 preschool children ages 2–5 years from Mirpur, an urban slum in Dhaka, Bangladesh. Based on results of polymerase chain reaction (PCR) on stool DNA samples, 39 were E. dispar–positive, 17 were E. histolytica–positive, and 1 was positive for both E. histolytica and E. dispar. Of the 52 samples negative by stool PCR, 18 were eventually found positive for E. histolytica, E. dispar, or both, either by PCR from culture DNA or by antigen detection tests performed on stool specimens, and the remaining 34 samples were negative by all methods. Only four of the samples were from children with diarrhea.

All stool samples were cultured for Entamoeba species in Robinson’s medium (8) within 6 hours of collection, and hexokinase isoenzyme analysis was performed when possible as previously described (9). E. moshkovskii strains Laredo and FIC were maintained axenically in LYI-S-2 medium (10) with 10% adult bovine serum. Laredo (ATCC 30042) is a human isolate, and FIC (ATCC 30041) is an environmental isolate. E. histolytica HM-1:IMSS clone 9 (ATCC 50528) and E. dispar SAW760 (ATCC 50484) were used as controls.

Based on the sequences of the small subunit rRNA genes (SSU-rDNA) of E. histolytica and E. dispar, nested sets of primers (designated E-1/E-2, Eh-1/Eh-2, and Ed-1/Ed-2) were used, as described (11), to detect E. histolytica and E. dispar in stool specimens (Table 1). Based on the sequence of the SSU-rDNA gene of E. moshkovskii Laredo (GenBank accession no. AF 149906), a nested set of primers (designated Em-1/Em-2 and nEm-1/nEm-2) was designed (unpub. data) and used to detect E. moshkovskii in stool DNA (Table 1). In the initial PCR (total vol. 25 µL), 1.0 µL of stool or culture DNA was used. Thermal cycler conditions included 30 cycles, each consisting of 92°C for 1 min, 55°C for 1 min, and 72°C for 1 min, followed by a final extension of 7 min at 72°C. In the nested PCR, 1.0 µL of first PCR product was used as the template DNA and the annealing temperature was raised to 62°C, leaving the other parameters of the amplification cycles unchanged. E. moshkovskii–specific nested SSU-rDNA gene amplification products were digested with restriction endonuclease XhoI for 1 h at 37°C according to the manufacturer’s instructions (Invitrogen Corp., Carlsbad, CA) to verify species identity. All PCR products were separated in 1.8% NuSieve 3:1 agarose gels (Flowgen, Lichfield, England) in 1x Tris-borate-EDTA buffer and visualized after staining with ethidium bromide (0.2 µg mL-1; Sigma-Aldrich Co. Ltd, Poole, England).

Based on the sequence of the ArgTCT tRNA gene of E. histolytica, a set of primers were designed (ArgTCT-1 and ArgTCT-2). Thermal cycler conditions for PCR were the following: 30 cycles each, consisting of 94°C for 1 min, 55°C for 1 min 30 s, and 72°C for 2 min, followed by a final extension of 5 min at 72°C. The ArgTCT amplification products from E. moshkovskii Laredo, E. moshkovskii MS15-3646 (one of the infections detected above), and E. dispar SAW760 were cloned into the pGEM-T Easy vector (Promega) and sequenced (MWG Biotech Ltd, Milton Keynes, England). From the sequence results, an E. moshkovskii–specific primer pair, EmR-1 and EmR-2, was designed to amplify the E. moshkovskii ArgTCT gene fragment specifically (Table 1). PCR amplification was performed at an annealing temperature of 58°C as described for ArgTCT gene amplification.

All 109 stool specimens were added to Robinson’s medium for growth of Entamoeba species. Incubation led to growth of E. histolytica/E. dispar/E. moshkovskii in 33 cultures and E. coli in 8 cultures (no growth of E. hartmanni or Endolimax nana or was observed). Hexokinase isoenzyme analysis was possible for 10 cultures; 4 of them showed the band pattern of Entamoeba histolytica, 5 showed E. dispar, and 1 showed the band pattern of E. dispar with an extra band just behind the faster moving band, perhaps indicating a mixed culture with E. moshkovskii. 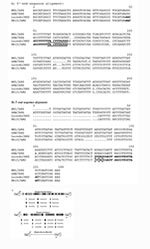 A comparison of SSU-rDNA sequences from E. moshkovskii, E. histolytica, and E. dispar, showed that the restriction endonuclease XhoI cuts exclusively in the E. moshkovskii–specific, 258-bp–nested PCR product to produce 236-bp and 22-bp fragments. Products from all 23 positive stool samples and the Laredo strain showed the presence of this site (Figure 2).

The EmR primers amplified the expected 265-bp fragment from E. moshkovskii Laredo DNA and did not amplify E. histolytica HM-1:IMSS or E. dispar SAW760 DNA. However, they successfully amplified 10 of a possible 23 E. moshkovskii–positive stool DNA samples. The most likely reason why these primers did not amplify the other 13 E. moshkovskii DNA samples is that they differed in sequence in the primer-binding regions. Although the PCR product size of the 10 positive samples was slightly different from that of Laredo, they were very similar in size to each other (Figure 3). The DNA of the previously reported E. moshkovskii ICDDRB:717, isolated from humans in the same geographic location (6), also gave a product of the same size (Figure 3, lane 2). The EmR primers successfully amplified DNA from environmental E. moshkovskii isolate FIC, but its product size was quite different from that of the human isolates of E. moshkovskii (Figure 3, lane 7).

The main objectives of this study were to develop molecular tools to identify E. moshkovskii and to investigate its prevalence and diversity in humans. We were successful in developing a simple diagnostic technique: a nested SSU-rDNA PCR followed by restriction endonuclease digestion. We chose to use nested PCR to detect E. moshkovskii infections because our previous experience in this area showed that nested PCR was much more efficient in amplifying stool DNA (14). Our attempt to produce a species-specific polymorphic marker was not completely successful. The EmR primers failed to amplify 13 of 23 E. moshkovskii–containing samples, probably because of sequence differences in primer-binding sites. However, the ArgTCT primers, originally designed to amplify E. histolytica and E. dispar DNA, did amplify most of the E. moshkovskii samples, producing a product distinct in size from those of E. histolytica and E. dispar.

Our study has some limitations. The subjects were children 2–5 years of age, so we do not know whether these subjects are representive of all age groups. All previous human isolates of E. moshkovskii have belonged to ribodeme 2 (5). Our attempts to perform riboprinting on these infections were unsuccessful, likely because of the size of the amplification target (approximately 1.95 kb). Even if PCR had been successful, the presence of mixed infections with other eukaryotes would have prevented successful typing.

The high prevalence of E. moshkovskii shown in this study population indicates that perhaps humans are a true host for this putatively free-living ameba and are not just transiently infected. This prevalence may also explain some of the microscopy- positive/antigen-negative results obtained when using the Entamoeba test kit (15). Epidemiologic studies of E. histolytica infection should include tools to diagnose all three of these species individually, simultaneously, and accurately, and the prevalence of E. moshkovskii infection in other regions of the world should be investigated.

Mr. Ali is a senior research officer at the International Centre for Diarrheal Disease Research, Dhaka, Bangladesh, on leave and studying for his doctorate in the Department of Infectious and Tropical Diseases, London School of Hygiene and Tropical Medicine. His current research focus includes genetic diversity in Entamoeba species.

Mr. Hossain is a research officer at the International Centre for Diarrheal Disease Research, Dhaka, Bangladesh. His interests include the diagnosis of Entamoeba species and parasite-related nutritional biochemistry.