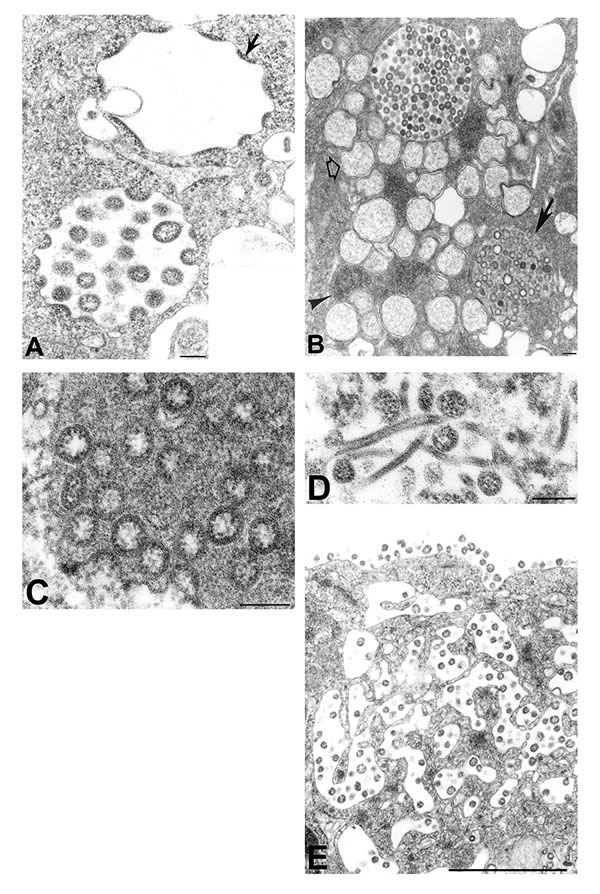 Figure 1. Assembly of severe acute respiratory syndrome–associated coronavirus (SARS-CoV) particles in infected Vero E6 cells. A) Apposition of nucleocapsids (arrow) along membranes of the budding compartment as particles developed and budded. Nucleocapsids measured 6 nm in diameter and were mostly seen in cross-section. Some virions had an electron-lucent center, with the nucleocapsid juxtaposed to the envelope, while others were relatively dark when the nucleocapsid was present throughout the particle. Tannic acid pre-treatment enhanced the visibility of the club-shaped viral projections (inset), which averaged 14 nm in length. B) SARS-CoV–infected cell with virus-containing vesicles, double-membrane vesicles (open arrow), and nucleocapsid inclusions (arrowhead). Note the vesicle with granular material interspersed among the virions (arrow). C) Higher magnification of a virus-containing vesicle with dark granular material. D) Tubular structures in a virus-containing vesicle. E) Virions in vesicles, which appeared to migrate toward and fuse with the plasma membrane. The characteristic lining of particles along the cell surface is seen. Bars: A, inset; B–D, 100 nm; E, 1 μm.