In the past, fatal morbillivirus infections have been reported in various cetacean and seal species. In pinnipeds, the disease has been described in crabeater seals (Phoca carcinophagus) from the Antarctic (1), Baikal seals (P. siberica [2]), monk seals (Monachus monachus; [3]), Caspian seals (P. caspica [4]), and harbor seals (P. vitulina) from the North and Baltic Sea (5). Phocine and canine distemper viruses (CDV) were isolated as causative agents in different epidemics of seals. Phocine distemper virus 1 (PDV-1) and CDV represent two distinct but antigenetically and genetically related morbilliviruses (5). An increased number of deaths in the Danish seal population was noticed in May 2002, starting at the Kattegat Isle of Anholt. PDV-1 was isolated as the causative agent (6), and the disease spread to Sweden and Norway in the following month. A second outbreak was observed mid-June in the Netherlands. Subsequently, the disease spread to Germany and Denmark in an eastern direction, and to Belgium, France, Great Britain, and Ireland to the West. In Germany, approximately 7,500 harbor seals died during the epidemic (7). We present morphologic, virologic, and serologic findings in affected seals from German waters. 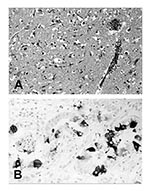 Screening for morbillivirus-specific nucleic acid in tissue samples from lung, spleen, and lymph nodes as well as in blood samples from 85 seals was performed by reverse transcription–polymerase chain reaction (RT-PCR). For this procedure, universal morbillivirus primers based on the conserved sequence of a 457-bp fragment of the phosphoprotein gene (8,6) were used. PDV-specific RNA was detected in 46 (54%) of the 85 seals from German waters affected from July onward. Both PDV-specific RNA and morbillivirus antigen were detected in 33 (43%) of 77 animals. Seals with no detectable morbillivirus antigen or nucleic acid had pneumonia and endoparasitosis of varying degrees of severity or died of undetermined causes. 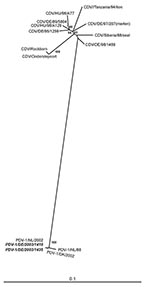 Sequence analysis of the RT-PCR product showed an identity of 97% compared to the Dutch isolate of 1988. The German isolate was 100% identical with the PDV isolate from the Netherlands and differed in 1 nt from the Danish isolate (6) (not shown). Phylogenetic analysis showed that the phocine isolates from the two epidemics in European waters formed a discrete cluster, separated from the CDV isolates, including those from lion and Siberan seal (Figure 2).

Neutralization assays using the CDV strain Onderstepoort were performed to determine the titers of serum samples from 187 harbor seals from German waters, collected from 1996 until the outbreak of the epidemic in 2002 (9,10). Because of the cytotoxicity of some serum samples, only titers of >10 were considered positive. No neutralizing antibodies were found in 164 (88%) of 187 serum samples. Titers from 22 (12%) of the 187 animals ranged from 14 to 240 (mean 50.5, ± 52.6 standard deviation). One animal had a titer of 480.

The morphologic and immunohistochemical findings in harbor seals from German waters during the recent morbillivirus epidemic in northwestern Europe closely resembled those observed in 1988 (11–13,5) and confirmed the epithelio-, lympho- and neurotropism of the PDV. The distribution of the viral antigen indicates that the respiratory tract was the primary route of morbillivirus infection. The virus-induced marked lymphoid depletion may have allowed secondary bacterial infections. In contrast to reports about European harbor seals from 1988, no demyelination was detected in seals from German waters in 2002 (5). Whether this finding represents a distinct feature of the 2002 epidemic or is a result of the small number of investigated animals remains unclear. Seals that died during the morbillivirus epidemic with no detectable viral antigen or nucleic acid may have cleared the virus but still have virus-induced immunosuppression, which could result in fatal secondary bacterial or parasitic infections. Furthermore, poor preservation of some carcasses may have caused false-negative results. The RNA sequences of the recent virus isolates showed a virus population along the German coast during this epidemic that was almost identical to the isolates from the Netherlands and Denmark in 2002 and that had a high identity to the isolate from 1988 (6). Protective morbillivirus-specific antibody titers were detectable in only a few seals from German waters before the outbreak in 2002, suggesting a high susceptibility for morbillivirus infection in this naive population.

During the morbillivirus epidemic in 1988, approximately 65% of the Dutch, Danish, and German Wadden Sea seal population died (7). The death rate in 2002 is estimated at approximately 51% on the basis of the number of dead seals and the count of the Wadden Sea seal population in 2003 (14). The lower death rate in 2002 may have been influenced by different factors, such as decreased social contacts at the beginning of the epidemic during the late breeding season. In addition, genetic selection of a less susceptible population originating from the survivors of the 1988 outbreak might have resulted in a lower number of deaths during the second epidemic. It remains unclear why both outbreaks started at the Danish Kattegat isle of Anholt. In the past, migrating Arctic seal species, such as harp seals from Greenland, have been suspected as carriers that introduced a morbillivirus into an immunologically naive population (15). This species may have served as a reservoir that maintains the circulation of PDV.

Several epizootics of infectious diseases in marine mammals with increases in air temperature were observed, indicating that environmental influences may have also resulted in the emergence of new epidemics (16). Further studies are needed to determine whether alterations in migration patterns of Arctic seal species caused by changes in climatic conditions are responsible for the two PDV epidemics in northwestern Europe.

Dr. Müller is a research assistant in the Department of Pathology of the School of Veterinary Medicine in Hannover, Germany. Her research activities include a health status monitoring program in seals and cetaceans from the German North and Baltic Sea and Black Sea cetaceans with special emphasis on morbillivirus infections.