Tuberculosis (TB) remains one of the leading causes of illness and death in the world. One third of the world’s population is estimated to be infected with Mycobacterium tuberculosis, the causative agent of TB (1). This reservoir of infected persons leads to ≈8 million new cases of TB and 2 million deaths each year. Approximately 80% of all new TB cases in the world occur in 22 countries that have incidence rates from 68 to 584 per 100,000 population (2). The priorities for TB control programs in these areas are identifying and treating active cases. Unfortunately, only 40% of smear-positive pulmonary cases are detected globally, and, of these cases, 28% to 80% are treated successfully (2). Most high-incidence countries also use the only available TB vaccine, Mycobacterium bovis bacillus Calmette-Guérin (BCG). Although BCG is the most widely used vaccine in the world, its efficacy in preventing adult forms of TB is relatively poor, with an average efficacy ≈50% (3). A new, more effective vaccine would be expected to improve TB control substantially, and therefore, vaccine development is one of the highest priorities in TB research (4,5). The Gates Foundation recently provided nearly $83 million in grants to boost TB vaccine research (6).

Recent sequencing of the M. tuberculosis genome as well as new developments in proteomics and comparative genomics have led to renewed interest in developing new, more effective vaccines against TB (7,8). Vaccines currently under development include subunit vaccines (9), naked DNA vaccines (10,11), and attenuated mycobacteria, including recombinant BCGs expressing immunodominant antigens and cytokines (12). Phase I clinical trials of several of these vaccines are under way or scheduled to begin very soon (13,14). TB vaccines under development can be divided into two categories: preexposure or postexposure vaccines. Preexposure vaccines prevent infection and subsequent disease; these vaccines are given to uninfected persons. Postexposure vaccines aim to prevent or reduce progression to disease; these TB vaccines will be given to persons who are already infected with M. tuberculosis. In industrialized countries where TB incidence is low, a preexposure vaccine is the most effective for TB control (15). However, the most effective type of vaccine to control TB epidemics in high-incidence countries, where prevalence of latent TB infection is high, is not apparent. We use mathematical models to predict the potential public health effect of new TB vaccines for epidemic control in high-incidence countries. We evaluate the effect of both pre- and postexposure TB vaccines on two outcome variables: the number of new infections and the number of new cases of disease. We then discuss health policy implications of our analyses.

We used mathematical models to compare the potential public health impact of mass vaccination campaigns that used either pre- or postexposure vaccines. We assessed the public health impact in terms of the cumulative percentage of infections prevented and the cumulative percentage of TB cases prevented. We modeled the potential effect of vaccines in developing countries with a high incidence and prevalence of infection. Our simulated incidence ranged from 100 to 200 new TB cases per 100,000 persons per year, and we assumed that 28%–50% of the population was latently infected with M. tuberculosis. We also assumed that treatment rates were low to moderate (i.e., that 40%–60% of TB patients would be treated and cured). We modeled the potential public health impact of high-efficacy (50%–90%) vaccines and high vaccination coverage rates (60%–90%). We used two separate mathematical models to assess the effect of vaccination: a pre- and a postexposure vaccine model (see Appendix). Our models are similar to those developed by Lietman and Blower (15,16), but we extended them to include the possibility of reinfection of latently infected persons. We analyzed both of our models with uncertainty and sensitivity analysis based on Monte Carlo methods (17–20) (see Appendix for further details) to quantify the effect of vaccine efficacy, duration of vaccine-induced immunity, and vaccination coverage rates on the cumulative percentage of infections and TB cases prevented.

Figure 1. Flow-diagram of postexposure tuberculosis (TB) vaccine model. States and processes that relate to the vaccine are shown in red. Equations are given in the Appendix.

Figure 2. Flow-diagram of preexposure tuberculosis (TB) vaccine model. States and processes that relate to the vaccine are shown in red. Equations are given in the Appendix.

Percentage of Infections and Cases Prevented 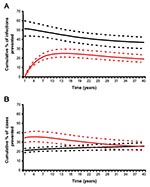 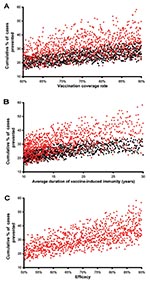 Since preventing disease is more important than preventing infection and to have an immediate, substantial decrease in TB cases is desirable, our results imply that postexposure vaccines would be more beneficial than preexposure vaccines. Our results show that public health officials should expect campaigns that use postexposure vaccines to first appear highly effective, but that effectiveness will decrease with time. We have also shown that the incidence of disease is likely to remain high even if highly effective vaccines that induce long-term immunity are developed and widely deployed. We found that even widely deployed high-efficacy (50%–90%) pre- or postexposure vaccines are only likely to reduce the number of TB cases by one third. Reductions in the number of TB cases would directly translate into reductions in TB deaths (results not shown). Currently the annual TB death rate is 2 million; hence, our results indicate that the type of vaccines we modeled could save ≈700,000 lives per year. These vaccines could also substantially reduce the emergence of drug-resistant TB (22,24).

Also, the increasing HIV epidemic will lead to continuous increases in the incidence of TB in developing countries (26). Currently, what effect co-infection with HIV will have on TB vaccine effectiveness is unclear; possibly, HIV co-infection could reduce vaccine effectiveness. Thus, any new TB vaccine should be evaluated in clinical trials to determine the effect of HIV coinfection on vaccine effectiveness. To reduce the severity of TB epidemics, we recommend that developing and deploying vaccines that act as both pre- and postexposure vaccines are necessary to simultaneously attack both sources that drive the TB rate. Additionally, maintaining high rates of detection and treatment of tuberculosis is necessary, as recommended by the World Health Organization (2); by combining treatment and vaccination strategies, eradicating TB epidemics may be possible, as we have previously shown (16).

Our results have implications for designing both TB vaccines and vaccination campaigns. Highly effective vaccines will be needed to have the public health impact that we have shown (i.e., to reduce the TB death rate by one third). Whether or not the vaccines currently in development will afford this level of efficacy remains to be seen. Moreover, vaccines will need to provide very long-lasting immunity; our current analysis examines the effect of fairly long-lasting vaccines (10–30 years average duration of immunity). Different types of vaccines have different durations of immunity. For example, DNA vaccines should provide lifelong immunity, whereas subunit vaccines will likely require booster vaccinations (28), an approach that would be more logistically difficult and expensive. Also, we have shown that preexposure vaccines are best if they prevent infection (mechanism 1) rather than allow infection but reduce the probability of fast progression to disease (mechanism 2) or reduce the rate of progression of latently infections to disease (mechanism 3). Whether or not new TB vaccines will prevent infection from occurring is not known, but BCG is clearly not able to prevent infection, and vaccines currently in development will likely not be able to do so either (29). As new TB vaccines and other control strategies become available, their potential benefits to TB control efforts can be evaluated by mathematical modeling. Mathematical models can be used as health policy tools to evaluate strategies for controlling TB (30–35); mathematical models also provide insights for predicting the potential public health impact of imperfect HIV vaccines (36–39). Our results show that, because of the complex pathogenic process of TB, high-incidence epidemics are unlikely to be substantially reduced by widely deploying highly effective preexposure or postexposure vaccines. We suggest that to achieve global control of TB, developing a single TB vaccine that functions as both a pre- and a postexposure vaccine is necessary.

Dr. Ziv is an assistant professor of medicine at the University of California, San Francisco. His previous work on tuberculosis includes a model of the population-level efficacy of targeted prevention for early latent infection.