Analysis of clinical isolates of Vibrio parahaemolyticus from outbreaks in Chile in the cities of Puerto Montt in 2004 and in Antofagasta in 1998 indicated that 23 of 24 isolates from Puerto Montt and 19 of 20 from Antofagasta belonged to the pandemic clonal complex that emerged in Southeast Asia in 1996.

Vibrio parahaemolyticus infections that caused most seafoodborne gastroenteritis were associated with multiple diverse serotypes until 1996. Since then, however, most cases have been caused by the O3:K6 serotype (1). Molecular studies with pulsed-field gel electrophoresis (PFGE) (2), arbitrarily primed polymerase chain reaction (AP-PCR) (3,4), and multilocus sequence typing (MLST) (5) have shown that these pandemic strains are clonally related. Most isolates of this pandemic complex exhibit a unique sequence within the toxRS operon (toxRS /new) (4) and possess a unique open reading frame, orf8 (6), which corresponds to an associated filamentous phage. Other common properties of pandemic strains are the presence of the structural tdh gene and the absence of trh and urease gene (7). By using the criteria stated above, strains of the pandemic clone have been identified as dominant isolates from clinical cases of diarrhea reported in various Southeast Asian countries, including India, Japan, Thailand, Bangladesh, Taiwan, and Vietnam, as well as from some cases in the United States (1,2,4,8,9) but not in the Southern Hemisphere. Most epidemic isolates initially identified were classified within serovar O3:K6, however, more recently, isolates classified in serovars other than O3:K6 have been identified as also forming part of the pandemic clone (4,8,10,11).

From 1992 to 1997, the Institute of Public Health (ISP) reference laboratory in Chile received 30 isolates from regional hospital laboratories for identity confirmation. However, an outbreak that occurred primarily in the northern city of Antofagasta (23°39′S 70°24′W) from November 1997 to March 1998 caused this number to increase to >300 isolates (12). A second outbreak affecting approximately 1,500 persons (Unidad de Epidemiología, Servicio de Salud Llanquihue-Chiloé-Palena, Chile, pers. comm.) occurred from January to March 2004, mainly in Puerto Montt (41°29′S 72°24′W), a region of usually cold coastal water. Apart from its public health impact, this last outbreak had important economic and social repercussions because this region is one of the main shellfish-producing areas in Chile. The presence of tdh-positive V. parahaemolyticus was confirmed in random shellfish samples, and the extraction of seafood had to be suspended during the season of high demand.

To investigate the identity and relationship of the V. parahaemolyticus strains causing these two outbreaks to the pandemic strains, we determined their phenotypic and genotypic properties. V. parahaemolyticus isolates from Puerto Montt were obtained from rectal swabs from 24 patients 6 to 69 years of age with acute diarrhea. The 20 clinical isolates from Antofagasta were provided by the National Institute of Public Health of Chile. Eleven previously well-characterized strains of the pandemic complex, isolated in Southeast Asia, including strain RIMD2210633 (VpKX), whose genome has been sequenced (13), were included for comparison. VpKX was directly obtained from the culture collection. The other bacterial strains of the pandemic group were provided by Mitsuaki Nishibuchi, Center for Southeast Asian Studies, Kyoto University. They are KXV225, VP2, VP47, VP81, 97LVP2, JKY-VP6, AN-5034, AN-8373, OP-424, KXV737. Three other V. parahaemolyticus nonpandemic strains, ATCC17802T (VpD), RIMD 2210856 (VpAQ), 2210086 (VpI), and the V. alginolyticus strain ATCC17749 (Va) were directly obtained from the indicated culture collections. The identification of the isolates used in this study was confirmed by API-20E for enterobacteria (bioMérieux, Inc., Hazelwood, MO), according to the manufacturer’s instructions. The O and K antigens of the V. parahaemolyticus strains were determined by slide agglutination with rabbit antisera obtained from Seiken (Denka Seiken. Co. Ltd. Tokyo, Japan), as described by the supplier.

For PCR, bacterial DNA was extracted from overnight cultures in Luria Bertani broth (supplemented with 1% NaCl) by using the Wizard Genomic DNA Purification kit (Promega, Madison, WI). DNA concentration was assessed by the intensity of the DNA band after agarose gel electrophoresis and staining with ethidium bromide. Known amounts of λ-DNA were used as a standard. PCR assays were performed by using approximately 10 ng per reaction tube, except for AP-PCR, in which 25 ng were employed. Amplifications of the different markers were performed as previously described: tdh and trh (7), orf8 (11), toxRS/new (4), and AP-PCR (11). The AP-PCR patterns were recorded and analyzed with GelCompar II (Applied Maths, Sint-Martens-Latern, Belgium). Genetic distance was calculated on the basis of the number of shared bands between isolates, and similarity matrices were calculated by using the Dice coefficient (14). Clustering was achieved by using the unweighted pair group method with arithmetic mean (UPGMA). Kanagawa and urease tests were performed as described by the U.S. Food and Drug Administration/Bacterial Analysis Manual (15). 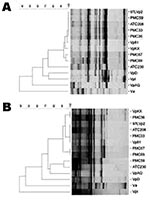 Figure. Representative arbitrarily primed polymerase chain reaction (AP-PCR) patterns for Vibrio parahaemolyticus DNA from strains of the outbreaks in Chile and Southeast Asia and dendrogram illustrating the clustering of the patterns by...

Twenty V. parahaemolyticus isolates obtained from the outbreak in Antofagasta, Chile, in 1998 and 24 from the outbreak of Puerto Montt, Chile, in 2004 were characterized. All of the isolates, excluding 1 from Antofagasta and 6 from Puerto Montt, tested positive for every property of the pandemic clonal complex under analysis (Table). Only 1 isolate from Antofagasta (ATC 230) and 1 from Puerto Montt (PMC 59) differed from the pandemic group in more than 1 property. Five isolates from Puerto Montt diverged from the main group in only 1 of the tested properties; 4 were toxRS/new negative, and 1 was serovar O4:K12. The isolates were also analyzed by their AP-PCR patterns. For this analysis, the patterns for 11 South East Asia isolates of the pandemic clone were initially obtained. All of these isolates could be clustered into only 2 groups when either primer P1 or P3 was employed. The patterns obtained with the isolates from Chile were then compared with those of 3 isolates from Southeast Asia, representing the 2 AP-PCR patterns observed within this last group. Three nonpandemic V. parahaemolyticus strains and 1 V. alginolyticus strain were also included. Every isolate from Chile, except ATC230, clustered with the pandemic isolates when using primer P1 (11) for PCR (Figure A). A similar result was observed with primer P3 (Figure B), although in this case PMC59, the isolate that differed from those in the clonal complex in more than 1 property (Table) clustered with ATC230.

Our results show that the spread of the pandemic clonal complex reached the Southern Hemisphere as early as 1998, only 2 years after the strain abruptly appeared in Calcutta, India, in 1996 (3). The diversity observed among the isolates obtained in Puerto Montt did not appear among those from Antofagasta. Five isolates differed in only 1 property, 1 was from a different serovar, and 4 lacked the toxRS/new sequence. These findings raise the question of whether this diversity was originally present in the introduced pandemic strain or whether it was locally generated. The serovar O4:K12 observed in 1 of these isolates (PMC46) has been previously observed among isolates from southern Thailand (11). How and when the pandemic strain arrived to these remote regions in the Southern Hemisphere, and why it caused the outbreaks during those years, remains a matter for speculation. The outbreak in Puerto Montt was likely triggered by higher than normal temperatures during the summer months in this region, which is normally cool in all seasons and has an average daily superficial water temperature<16°C year round (Dirección Meteorológica de Chile, pers. comm.).

Narjol González-Escalona is a postdoctoral fellow in the Biotechnology Laboratory at the Institute of Nutrition and Food Technology. His research interests include the ecology and evolution of marine bacteria, especially those of the genus Vibrio.

We are pleased to acknowledge Ursula León for performing several microbiologic assays, Patricia Gutierrez for technical assistance in the collection of the isolates from Puerto Montt, and Wally Silva from the Public Health Institute for providing samples of Antofagasta.

N. González-Escalona received support from an A. Stekel fellowship from the Institute of Nutrition and Food Technology/Nestlé. V. Cachicas was on leave from the Public Health Institute for the duration of this project, supported by a Graduate International Fellowship from the American Society for Microbiology. This work was supported in part by grants FONDECYT 1040875 to R. Espejo and a U.S.A.-Canada 2004 Guggenheim Fellowship to F.C. Cabello.

Page created: April 15, 2011
Page updated: April 15, 2011
Page reviewed: April 15, 2011
The conclusions, findings, and opinions expressed by authors contributing to this journal do not necessarily reflect the official position of the U.S. Department of Health and Human Services, the Public Health Service, the Centers for Disease Control and Prevention, or the authors' affiliated institutions. Use of trade names is for identification only and does not imply endorsement by any of the groups named above.