To the Editor: Ranaculture, the practice of farm-raising frogs for scientific and culinary purposes, is practiced in many countries, including the United States (1). As with aquaculture, most ranaculture challenges relate to husbandry and disease. In aquaculture, iridovirus infections are reportable and can result in large-scale fish deaths (2,3). The family Iridoviridae is composed of Iridovirus, Chloriridovirus, Ranavirus, and Lymphocystivirus. The first 2 infect insects; the latter 2, lower vertebrates (4). Infection with frog virus 3 (FV3), the type species of the genus Ranavirus, results in edema, hemorrhage, and necrosis of lymphoid tissue, hematopoietic tissue, liver, spleen, and renal tubules (3,5); mortality rates in free-ranging amphibians are >90% (6).

In May 2006, a commercial American bullfrog (Rana catesbeiana) ranaculture facility suffered massive (>50%) deaths of frogs that had recently undergone metamorphosis. The facility, with >25 years of experience, uses an on-site breeding colony and an all-in, all-out system, in which cohorts are moved through the system as 1 unit. Well water is used throughout. The breeding colony and larvae are housed in outdoor tanks to expose them to ambient climatic conditions, thought to facilitate breeding and development. Outdoor tanks are covered with mesh to prevent predation by birds. After metamorphosis, animals are moved indoors. 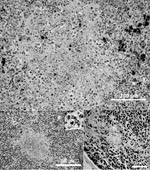 Pathologic changes in all metamorphs were similar. Gross findings were as follows: irregular gray patches on the skin, cutaneous and enteric erythema, mottled heart and kidneys, pale and friable livers, and enlarged gall bladders. Histologic examination showed lymphoid depletion and necrosis in the thymus and other lymphoid tissues and necrosis in the liver, spleen (Figure), and epidermis. Scattered intracytoplasmic inclusion bodies were observed in the spleen (Figure B inset). Epithelial degeneration was noted in the renal tubules. Bacteria were present within the dermal lesions, glomerular tufts and vessels of the kidney, and, rarely, in the spleen and sinusoids of the liver.

Iridovirus was isolated and confirmed by PCR. A BLAST search of the resulting sequence (GenBank accession no. EF101698) showed identity with FV3. Aeromonas hydrophila was cultured from the internal organs and dermal lesions. Diagnosis was FV3 infection with a secondary A. hydrophila infection. Incidentally, 5 larval bullfrogs obtained from this cohort ≈6 months earlier died of nitrate toxicity 1 month after acquisition. PCR and sequencing identified FV3 (GenBank accession no. EF101697) in these 5 larvae; secondary bacterial invasion was absent.

Susceptibility to FV3 is thought to vary by species and life cycle (5–7). How the amphibian immune system responds to FV3 infection is not known. Critical periods for infectivity likely include the time before the larval immune system develops, at metamorphosis while the larval immune system is being dismantled, and during periods of exogenous stressors (e.g., movement of the animals from outside to inside tanks). Consequently, we hypothesize that the stress of recent metamorphosis, along with the added stress of movement from outside to inside, likely increased the frogs’ susceptibility to FV3.

Further, with lymphoid depletion and multiorgan compromise (necrosis), individual frogs become susceptible to opportunistic pathogens, such as A. hydrophila, especially when the innate immune system fails (i.e., skin abrasions). A. hydrophila infections alone can result in considerable loss in ranaculture systems (8). Unfortunately, specimens often are submitted for bacterial analysis only, not viral testing. Thus, the effects of Ranavirus on ranaculture remain unknown. As with free-ranging populations, in which coinfections have been reported (9), ranaculture populations that had a diagnosis of A. hydrophila may have had an underlying Ranavirus infection.

In vertebrates, iridovirus is thought to be transmitted only horizontally (10). This ranaculture facility kept frogs separated according to size, to decrease cannibalism. Possible routes of FV3 exposure in this facility are the following: exposure of the larval tank to an infected free-ranging frog, mechanical transmission during routine husbandry, or mechanical transmission by insects. Regardless, at this time the frogs can be treated only for bacterial pathogens; however, early detection and reduction of exogenous stressors may help less-affected bullfrogs clear the virus (11) and ultimately reduce loss.

All-in, all-out ranaculture systems may be able to eliminate FV3 infection by preventing exposure of cultured larvae to mechanical vectors and native anurans. Ranaculture systems must eliminate this virus before translocating infected frogs to naive systems. Because amphibians are declining globally, exposure of captive wildlife to free-ranging populations should be minimized.

We thank Lisa Whittington for her technical assistance with PCR. We thank the staff of the University of Georgia Tifton Veterinary Diagnostic and Investigational Laboratory for help in processing the samples.