Antimicrobial drug resistance of Salmonella spp. isolated from food animals in Denmark has so far been relatively low (8). However, an estimated 30% of all poultry, 10% of all pork, and 50% of all beef sold in Denmark is imported (9). Imported meat is therefore an important potential source of human infection with drug-resistant Salmonella spp. We compared antimicrobial drug resistance of Salmonella isolates from both imported meat and meat produced within Denmark (domestic meat), as well as from outpatients with diarrhea.

Salmonella isolates from humans and meat were obtained from July 1998 through June 2002. Isolates from domestic poultry, pork, and beef were obtained through the national Salmonella control program (10), and isolates from imported poultry, pork, and beef were obtained from the Denmark import control and from the regional food control units. Human salmonellosis is a notifiable disease in Denmark, and all human Salmonella spp. isolates are collected at the Statens Serum Institute. The serovars included were restricted to S. Typhimurium, S. Hadar, S. Dublin, S. Saintpaul, S. Enteritidis, S. Virchow, and S. Newport because these were the serovars of which a sufficient number of isolates had been tested for antimicrobial drug susceptibility. Data on 4,081 Salmonella isolates from humans were included in the study.

Statistical analyses were performed using S-PLUS version 6.2 (Insightful Corp., Seattle, WA, USA). The trend in the occurrence of resistant isolates over time, the occurrence of multidrug-resistant isolates over time, and the occurrence of nalidixic acid–resistant isolates were investigated by fitting a logistic regression model with origin (domestic/imported), time (year), product type (beef, pork, poultry), and all 2-way interactions as explanatory variables. The regression models were reduced by using a likelihood ratio test. Significance in all 2-by-2 tables (only tables with minimum 30 domestic and 30 imported samples) was tested by a Pearson χ2 test with continuity correction; if the number in any cell in the contingency table was <5, Fisher exact test was applied. All tests were done on a 5% significance level (p<0.05). No correction for multiple testing was done. An isolate was considered multidrug resistant if the isolate was resistant to >4 antimicrobial agents. 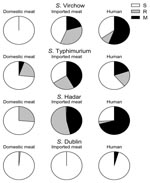 S. Hadar, S. Virchow, S. Newport, and S. Heidelberg were frequently found in imported products but rarely found in domestic products. Isolates that belong to these serovars are common causes of human salmonellosis in Denmark (13). Overall, a significantly higher number of resistant and multidrug-resistant Salmonella isolates were found among isolates from imported poultry, pork, and beef compared with domestic products. This finding implies that consumers in Denmark are more likely to be exposed to drug-resistant Salmonella spp. when eating imported compared with domestic meat. An increase in the occurrence of resistance over time was also observed among isolates from both domestic and imported meat; this is in agreement with observations worldwide (2–5). Antimicrobial agents might not be essential for treatment of gastroenteritis caused by Salmonella spp., but they are essential for treatment of patients with invasive infections. In particular, the frequent occurrence of resistance to quinolones is a matter of concern because these compounds are often used for first treatment of serious human infections, before the results of susceptibility testing are available.

Dr Skov is senior researcher in the Research Unit for Clinical Microbiology at the University of Southern Denmark. Her main research interests are the epidemiology and genotyping of foodborne Salmonella spp.

We thank the Danish Veterinary and Food Administration for providing import control data.

This study was supported by the Danish Institute for Food and Veterinary Research.