Norovirus is a major cause of viral gastroenteritis worldwide, accounting for at least 28% of all foodborne outbreaks (1). However, its pathogenesis is poorly understood (2). Although the disease is usually perceived as mild and self-limiting (symptoms generally subside within 2–3 days in otherwise healthy persons) (1,2), protracted diarrhea and serious complications may develop in elderly or immunocompromised patients (2–4).

During a 2-year period (November 2004–November 2006), 44 adult (>16 years of age) patients at 2 regional hospitals in Hong Kong Special Administrative Region with acute gastroenteritis were shown to be infected with norovirus genogroup GII.4. Clinical records were reviewed and baseline characteristics, clinical features, and output charts were studied. Cases were included for analysis if stool samples were collected <96 hours from symptom onset. Diarrhea was defined as having >3 loose stools per day. Duration of diarrhea was defined as the number of days (inclusive) between the first and final dates of symptoms (3).

Stool samples were collected from all patients when initially observed and processed immediately for RNA extraction. Diagnosis of norovirus infection and its quantitation were based on real-time reverse transcription–PCR assay of stool samples as described (5). The lower detection limit of the assay was 2 × 104 copies of cDNA/g stool. Phylogenetic studies were also performed as described (5).

Associations between clinical parameters and fecal viral cDNA concentrations were determined. Univariate associations between fecal viral concentration (log10 copies cDNA/g fecal specimen), baseline characteristics, and clinical variables were examined by using the Mann-Whitney test or χ2 test as appropriate. Variables with a p value <0.1 in univariate analyses were entered into multivariate models as covariates. Stepwise backward logistic regression was performed to identify independent variables associated with prolonged diarrhea, defined as >4 days of diarrhea. This cut-off was based on the results of many observational studies (1–4) and was also above the median duration of diarrhea in this cohort. Spearman rank correlation coefficient (ρ) was used to assess correlations between viral cDNA concentration and other continuous variables. A p value <0.05 was considered statistically significant. All probabilities were 2-tailed. Statistical analysis was performed with SPSS software version 13.0 (SPSS Inc., Chicago, IL, USA). 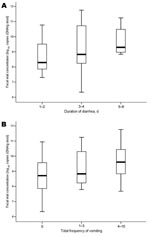 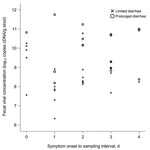 Figure 2. Scatter plot showing fecal norovirus cDNA concentrations in patients with limited and prolonged diarrhea, according to sampling day. Limited diarrhea is defined as a total duration of diarrhea of 1–3 days,...

To our knowledge, this is the first clinical study to demonstrate that fecal viral concentration correlates with duration of illness in norovirus gastroenteritis. It has been reported that severe protracted diarrhea caused by norovirus infection can develop in hospitalized, elderly, and immunocompromised patients (3,4,8). Such patients often shed virus for prolonged periods, which probably indicates active viral replication and slow viral clearance (4,8). In an animal model, norovirus was shown to infect and possibly replicate in enterocytes, resulting in disease (9). Results of our study thus provide preliminary evidence that active viral replication determines clinical disease in norovirus gastroenteritis, as in most other viral infections (10). These findings also suggest that more stringent infection control measures need to be implemented in patients with severe diarrhea because of high fecal viral concentrations (1–4,8).

This study was limited by a small sample size and fecal viral concentration, which was studied only at 1 time point for each patient. Further research on changes in fecal viral concentrations and their relationships with disease severity are warranted. Because no previous clinical studies describe temporal changes of norovirus concentration in relation to symptoms, we analyzed viral concentration data only in patients with acute diarrhea (days 0–4). Although our definition of prolonged diarrhea (>4 days, which was above the median in our cohort) seemed arbitrary, it is supported by the results of many observational studies, which show that in most patients (even elderly or hospitalized patients), acute symptoms subside within 2–3 days (1–4,8). Inclusion of only norovirus GII.4 infections in the analysis removed the possible confounder of strain variation on viral concentration (5). Whether similar correlations can be observed with other norovirus strains remains uncertain. Given that genogroup GII.4 is the predominant circulating strain in most countries with major outbreaks (6), these results have implications with regard to pathogenesis and infection control of norovirus infections.

In conclusion, these results provide preliminary evidence that a high fecal viral concentration is independently associated with prolonged norovirus gastroenteritis. Further studies are needed to confirm the role of enhanced viral replication on pathogenesis and transmission of this disease. In addition, the approach of quantifying norovirus by real-time PCR can be used for future evaluation of antiviral treatment (11) and to study factors associated with delayed viral clearance (3).

This study was supported by the Research Fund for the Control of Infectious Diseases from the Health, Welfare and Food Bureau of the Hong Kong Special Administrative Region Government.