Adamantane-Resistant Influenza Infection During the 2004–05 Season

Adamantane-resistant influenza A is an emerging problem, but infections caused by resistant and susceptible viruses have not been compared. We identified adamantane resistance in 47% of 152 influenza A virus (H3N2) isolates collected during 2005. Resistant and susceptible viruses caused similar symptoms and illness duration. The prevalence of resistance was highest in children.

Ferret models suggest that virulence is not increased by adamantane resistance in influenza A (H3N2) infections (8), although experimental studies with recombinant influenza (H1N1) in mice have suggested that the mortality rate is increased by a double mutation conferring adamantane resistance (9). Little is known regarding clinical effects in humans infected with adamantane-resistant influenza viruses. We compared clinical and demographic characteristics of patients infected with either adamantane-susceptible or -resistant strains of influenza A during the 2004–05 season.

Study participants were derived from a study of influenza vaccine effectiveness conducted within a 14–Zip code region surrounding Marshfield, Wisconsin, during January–March 2005. Eligible participants included children 6–23 months of age, adults >65 years of age, and persons 24 months–64 years of age with a high-risk medical condition. Research coordinators recruited eligible patients and obtained samples for influenza culture during inpatient and outpatient encounters for acute respiratory illness. Each participant (or parent) completed a short interview form to assess symptoms and onset date, and culture-confirmed patients were contacted again to determine the illness recovery date. The study was approved by the Marshfield Clinic institutional review board, and all participants provided written informed consent.

Influenza virus was isolated by inoculation and incubation in monolayered rhesus monkey kidney cells. Cultures were examined for cytopathic effect, and cultures showing no cytopathic effect were tested twice for hemagglutination titers. Influenza A and B were confirmed by immunofluorescence (Chemicon International, Inc., Temecula, CA, USA). All influenza A isolates were tested for adamantane resistance at the Centers for Disease Control and Prevention (CDC). Procedures for RNA extraction and pyrosequencing have been previously described (7). A medical record review was performed to assess any use of antiviral drugs by influenza A patients from 60 days before through 14 days after the enrollment date.

Univariate comparisons were performed, and crude and adjusted prevalence ratios were computed to evaluate the association between adamantane resistance and age, gender, vaccination status, date of clinical encounter, and presence of a high-risk medical condition. Enrollment dates were grouped into 4 consecutive 3-week periods beginning January 3, 2005. The referent period was the second 3-week period when the number of influenza cases peaked. All analyses were conducted with SAS version 9.1 (SAS Institute Inc., Cary, NC, USA). 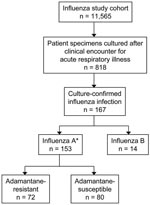 Figure. Results of patient recruitment and influenza cultures. *One isolate was not characterized.

Number of symptoms and duration of illness were similar for patients with adamantane-resistant and -susceptible influenza isolates (Table 1). The proportion of patients hospitalized was nearly the same in each group, and the distribution of individual symptoms did not differ significantly. Forty-five patients received antiviral therapy (37 adamantanes, 8 oseltamivir), but only 1 was treated with amantadine before influenza culture was obtained. Clinical features and duration of illness were similar whether or not patients received adamantane therapy. In a multivariable model that included patients of all ages, adamantane resistance was not associated with gender, time of clinical encounter, or influenza vaccination status (Table 2). Children 6–23 months old without a high-risk medical condition were significantly more likely to be infected with adamantane-resistant influenza A than were adults >65 years of age who had a high-risk condition. In a secondary analysis, no association was found between adamantane resistance and number of symptoms, duration of illness, or hospitalization.

This study provides epidemiologic evidence that the point mutation (S31N) conferring adamantane resistance has not altered influenza A (H3N2) virulence as measured by clinical symptoms and duration of illness. Hospitalization rates were also similar, although the power to detect a difference was low. These results are consistent with prior research in ferrets, which demonstrated that virulence was similar for adamantane-resistant and -susceptible influenza A (H3N2) isolates (8). The source population for this study included persons who were eligible for influenza vaccination based on age group or the presence of a high-risk medical condition. Consequently, participants were more likely to experience influenza complications relative to the general population. The absence of any difference in clinical severity in this higher risk population provides some reassurance that adamantane resistance will not affect overall influenza morbidity.

Factors contributing to rapid emergence of adamantane-resistant influenza viruses are not fully known. Resistance has been observed in a variety of outbreak and institutional settings for many years (10–12) but did not spread into the general population until recently (6,7). The proportion of human influenza A (H3N2) isolates with adamantane resistance increased dramatically in People’s Republic of China and Taiwan in 2003 (6). However, the degree to which the spread of resistant viruses from Asia contributed to the rapid escalation of adamantane resistance in the United States is uncertain.

The 2004–05 influenza season provided an opportunity to learn more about the epidemiology of adamantane resistance during a period when drug resistance was increasing in Wisconsin but was not yet universal. Children had the highest risk of acquiring an adamantane-resistant influenza infection and are an important reservoir for transmission of influenza to adult household members and the community (13). Still, we cannot explain why children were preferentially infected with adamantine-resistant strains in 2004–05. Only 1 patient was treated with amantadine before enrollment. The higher prevalence of resistance in children was therefore not attributable to individual adamantane use. There may have been multiple introductions of adamantane-resistant influenza viruses from other geographic areas during the 2004–05 season. This phenomenon was described in a recent phylogenetic analysis of influenza A (H3N2) isolates from New York state over a 9-year period (14). The analysis suggested that viral evolution within epidemic seasons is dominated by random importation of distinct viral strains from other geographic areas.

CDC continues to recommend that adamantane drugs not be used for influenza treatment in the United States. Given the recent emergence of oseltamivir-resistant influenza A and B infections (15,16), ongoing monitoring of influenza virus susceptibility to adamantanes and neuraminidase inhibitors is essential.

Dr Rahman was a postdoctoral fellow at the Marshfield Clinic Research Foundation, Marshfield, Wisconsin, at the time of this study. He is currently affiliated with the University of Texas Medical Branch in Galveston.

Adamantane-Resistant Influenza Infection During the 2004–05 Season