Japanese encephalitis virus (JEV) genotypes in Thailand were studied in pigs and mosquitoes collected near houses of confirmed human JEV cases in 2003–2005. Twelve JEV strains isolated belonged to genotype I, which shows a switch from genotype III incidence that started during the 1980s.

The origin of Japanese encephalitis virus (JEV) was recognized before 1935, and JEV was isolated in Japan in 1935. The virus has since spread from India to Indonesia and within the past 3 decades has reached previously unaffected parts of Asia and northern Australia (1,2). JEV is one of the most widespread causes of viral encephalitis worldwide; an estimated 3 billion persons are at risk for infection, and 10,000 to 15,000 die annually (3). Although most human infections are asymptomatic (1/1,000), 1/300 infections causes symptomatic infections, and 1/4 patients seeking treatment have symptoms of brain inflammation, which can lead to permanent neurologic sequelae and a 1/4 death rate (4).

JEV is a flavivirus transmitted by Culex mosquitoes to birds and pigs; humans are dead-end incidental hosts. On the basis of nucleotide sequencing of capsid/premembrane protein (C/PrM) and envelope (E) genes, 5 virus genotypes have been identified, including genotypes I to III (GI, GII, GIII). These have been found distributed all over southern Asia; a GIV strain was isolated from eastern Indonesia, and an isolate originating in Malaysia may represent a fifth genotype (5).

Three vaccines, derived from JEV GIII strains, are currently in use. Since the 1960s JEV immunization campaigns have dramatically reduced the effects of the disease in southern and Southeast Asia (6). In Thailand, JEV immunization began as a part of childhood vaccination program in the northern provinces in 1990; this program rapidly expanded to 36 provinces that had reported a persistent incidence of encephalitis (7). 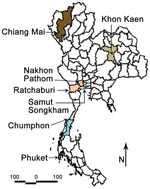 To study the JEV genotype distribution in Thailand and to eventually detect changes in Japanese encephalitis epidemiologic patterns, we conducted a 3-year survey (2003–2005) of JEV incidence in 7 provinces representative of the 4 regions of Thailand (north, Chiang Mai Province; northeast, Khon Khen Province; central plain, Nakhon Pathom, Ratchaburi, and Samut Songkram Provinces; south, Phuket and Chumphon Provinces). Pig farms and rice fields within a 2-km radius around houses of confirmed human cases of Japanese encephalitis were targeted for sample collection. Ten healthy sentinel piglets (10 weeks of age) were surveyed in each province, and blood samples were collected weekly for 14 weeks. Adult mosquitoes were collected on a monthly basis according to the targeted pig farm and availability of breeding sites for vectors (Table 1; Figure 1) by using both the CDC gravid trap (Model 1712) and the CDC light trap (P. Reiter, Centers for Disease Control and Prevention, Fort Collins, CO, USA). 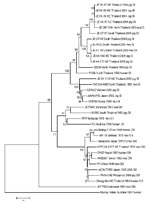 Figure 2. Sequence phylogeny based on E (envelope) gene nucleotide sequence of Japanese encephalitis virus isolates from pigs and mosquito hosts in Thailand during 2003–2005, with reference to other Southeast Asian isolates. Phylogenetic...

Twelve JEV strains were isolated, 3 from mosquitoes in 2003 and 10 from pigs in 2004 and 2005. The new JEV sequences were analyzed with a group of 22 previously published JEV strain sequences, including 6 from Thailand and 16 from other Asian countries. A phylogenetic tree was generated, and all 12 JEV new isolates fit into the same GI cluster, as did 3 other Thai strains previously isolated in 1982, 1984, and 1992 (Figure 2). Eleven of the newly identified isolates formed a subcluster (Figure 2, GIa) with 2 other strains previously isolated from Chiang Mai and Khon Ken in 1984 and 1982, respectively (B2239NThailand, P19Br NThailand); the remaining new isolate (JE KK 1116NEThailand2005) was associated with another subcluster (Figure 2, GIb), including strains isolated in 1992 from Chiang Mai (ThCMAr4492) and 3 others isolated from Vietnam, Japan, and Korea (O2VN22; JaNAr0102; and K94P05). Both subclusters were supported by 1,000 bootstrap replications and were consistent with the taxa distance (data not shown) showing introductions of GI in 1982 (within the GIa subcluster followed by a recent dispersion all over the country), and in 1992 for the GIb subcluster followed by local transmission.

GI strains appeared to cluster phylogenetically but not geographically, which suggests virus strains were transported over noncontiguous domains at variable geographic distances. Major environmental changes have occurred since the early 1950s with the increase in local and international transportation systems. Some researchers (10) consider the increase of the virus incidence in the human population to be associated with increased commercial activity. However, because of the low level of viremia in humans, traditionally considered dead-end hosts for JEV, it is more likely that the virus was spread within the country and to neighboring countries by migratory birds, infected domestic pigs, or infected mosquitoes (or their eggs) (11,12).

Although GIII strains were historically reported to circulate mostly in northern Thailand in the early 1980s, GI and GIII were found co-circulating from the north to the south; thereafter, only the GI strain was isolated in Thailand (13). The same genotype shift of GIII to GI, dating back to the early 1990s, was reported by several other Asian countries, including Japan and Korea in 1991 and Vietnam in 2001 (14); a steady emergence and dispersion of GI was also noticed in China in 1979, in Taiwan in the 1980s (13), and in Australia in 2000 (2). Altogether, such unique endemic expansion of GI occurred over a 25-year period in several countries of Southeast Asia, replacing the GIII genotype, which was present all over the region since the beginning of the virus genotype identification (prospectively and retrospectively).

In Thailand, the epidemiologic pattern of Japanese encephalitis first showed a visible decline in incidence with the development of immunization programs, but this decline also corresponded to the late 1980s when the practice of raising pigs in the backyard evolved into industrialized pig farming and the high rate of piglet seroconversion showed an intense virus circulation. The dramatic increase of industrial pig farming and trading must have played a major role in the dispersion of JEV genotypes within past decades in Asia. Concurrently with pig farming, the culicid main vectors have changed (14) and such factors as their ecology, trophic preferences, host competence, and virus fitness could play a role in an evolving rural environment. Moreover, further studies are needed to clarify the expansion of JEV GI strains, including the efficiency of a human and pig GIII-derived vaccine and the role of potential cross-immunity between another circulating flavivirus (13).

Dr Nitatpattana is a researcher with the Center for Vaccine Development at Mahidol University. His interest is vaccine development against the major flaviviruses of public health importance in Southeast Asia.

This study was supported by the Center for Vaccine Development, Mahidol University, Thailand, and the French National Research Agency (ANR / SEST 005), Emergence and Pathogenesis of Infectious Emerging Disease. Research and training of M.N.N. were supported, in part, by the French Research Institute for Development; the Thai Royal Golden Jubilee Fellowship Program; and the Franco-Thai program of the French Embassy in Thailand, sponsored by the French Ministry of Foreign Affairs.