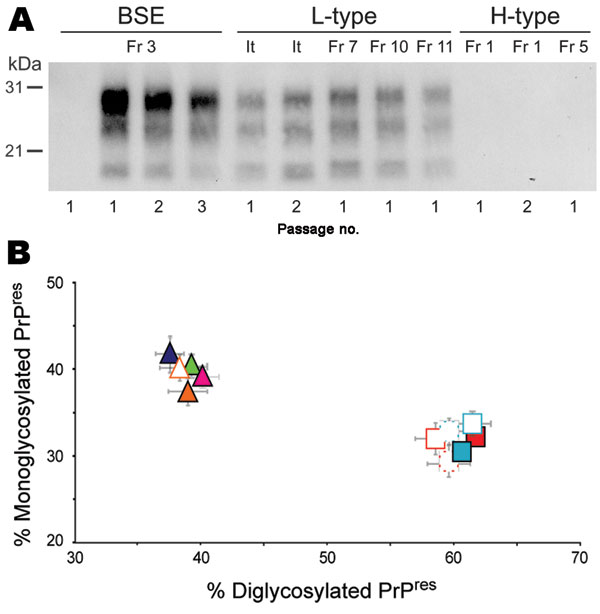 Figure 1. Protease-resistant prion protein (PrPres) in the brains of human PrP transgenic mice infected with atypical or zoonotic bovine spongiform encephalopathy (BSE) agents. A) Representative Western blot analysis of PrPres extracted (for detailed protocol, see 7) from brain homogenates of mice at terminal stage of disease or at end of lifespan after serial transmission of atypical (L-type and H-type) or classical BSE isolates. The amount of equivalent brain tissue loaded onto the gels was 0.01 mg (BSE; Fr3 isolate, 2nd and 3rd passage), 0.3 mg (L-type and 1st passage of BSE), and 10 mg (PrPres-negative samples). Anti-PrP monoclonal antibody Sha31 was used for PrPres detection. Immunoreactivity was determined by chemiluminescence. B) Ratio of diglycosylated and monoglycosylated PrPres species in the brains of mice after serial transmission of L-type or BSE isolates (data plotted as means ± standard error of the mean). Primary passage of L-type isolates are represented as triangles (orange, It; blue, Fr7; green, Fr10; pink, Fr11) and BSE as squares (light blue, Fr3; red, Ge). Passages are indicated by unfilled symbols of the same color (solid line, second passage; broken line, third passage). The ratio was determined after acquisition of PrPres chemiluminescent signals with a digital imager as previously described (7). Note the distinct glycoform ratio between L-type and BSE groups. It, Italy; Fr, France; Ge, Germany.